The not-so-new kid in town

Wall art, like the P-51C Mustang and P-47 Thunderbolt by AirCorps Aviation pictured above is available through Flight Line Gifts online or at the storefront.

If you've attended an aviation event at Anoka County Blaine Airport over the course of the past 21 years, chances are high you've met Craig Schiller. You may have known him as the first volunteer at the former Polar Aviation Museum, or even during his term as director there. Perhaps you've bumped into him during his 17 years of service as manager at Golden Wings Museum. Nowadays, you can find Schiller three miles from the airport grounds, still immersed in the past, present, and future of aviation.

In April, Schiller leased space in Nate's Plaza on 109th Avenue NE in Blaine, where he began the build out of Flight Line Gifts, a brick and mortar retail store for pilots and other aviation enthusiasts. The store is 2,000 total square feet, with 1,600 square feet dedicated for the show room for aviation products. The rest of the space contains a work bench area for photographing product to upload to the website, an office, small break room, and storage area with an overhead retractable door to a loading dock.

"One of the key elements I was looking for in a unit was a back room with an overhead door so we can easily take supplies when we go to shows," said Schiller. "We attended five aviation events as a vendor this year. We can take our tents and tables and product out the back door and away we go. The back area is really pretty simple."

The simplicity of the shop's layout gives no indication of the depth of planning that went into it. Flight Line Gifts is actually one aspect of the Flight Line Enterprise Project, conceived in 2005, that also includes a convention center and restaurant, all located on a site on the Anoka County Blaine Airport grounds.

"This is really the first phase of that project," said Schiller. "I am still vigilantly working on the event center and restaurant. So, ideally, once that facility gets up and running, we will move this whole store onto that site, or, potentially, we will keep this location as well as creating one on the airport grounds."

Early on in his career, Schiller said he observed a fact that impacted the way he looked at marketing in aviation.

"There are 100 aviation enthusiasts for every one pilot," said the entrepreneur. "When I worked at Polar Aviation Museum, there were many days we made more income in our gift shop than we did on admissions. There are many aspects of aviation people love. Whether it's for history, military, commercial, or modern times, having a product for visitors to enjoy was one benefit of that location."

Over twenty years of experience has not limited the businessman to the past way of getting things done, nor is he throwing out tried and tested methods. Diversity means a well balanced blend.

"Obviously, technology is a big deal in marketing these days," said Schiller. "We have our own website. We're on Instagram, Twitter, Craigslist, and Facebook. I just signed up for Gorupon and we're thinking of doing a Pinterest page. So, we're trying to generate income outside of just the retail store. That's how you survive this diversity. You survive through the Internet. Still, I am also finding people walking in the store who said they saw an ad in Tidbits, the local free newspaper."

Another concept of giving the store the best chance to succeed is networking with local artists to offer custom made products. Clothing lines come from a number of entities including All Star Warbirds, Pete Feigal, and individuals who have vintage flight suits, jackets or other aviation related items.

"I mean for this store to be different than other retailers," said Schiller, "to be unique, diverse in the sense of clothing, prints, toys, books, models, die casts, collectibles. It's across the board, finding things that are a little more rare."

Pricing is another area in which Flight Line Gifts differs from other outlets.

"People with consignment arrangements set their own price for what they think the market can bear," said Schiller. "Pricing gets more challenging when it comes to something like a signed print but I just do the research to come up with what I think is a fair price. My goal is to have everything in the store at least 10 percent lower than the Internet. If it isn't, I'm willing to match a reasonable price. I want my customers to come back."

Stock is strongly influenced by customer request. Though Schiller said he had "zero intention" of carrying pilot supplies, he responded to strong requests for maps, log books, and oil, resulting in brisk sales. He also remains open to further requests.

Another lesson learned by experience is people love to come to events. In the case of Flight Line Gifts, that means hosting a flea market. While the first flea market was modest, Schiller said its value was in letting people know the store existed, and in networking with other business owners.

"I consider it advertising," said Schiller. That was the benefit. People learned we are here. One of the most common phrases I head was, 'I'll be back.' That's what I really want to hear."

At present, the store is open seven days a week. Current hours will expand mid-November due to holiday shopping. 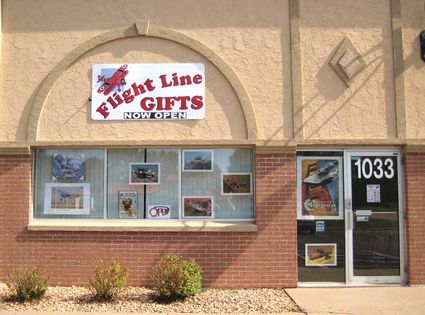 The brick and mortar outlet of Flight Line Gifts for pilots and other aviation enthusiasts is at 1033 109th Ave NE in Blaine, Minnesota. The shop serves the global community at www.FlightLineGifts.com

Though products are filling out the space at Flight Line Gifts, the store owner said he welcomes new items people may want to share.

"If aviation enthusiasts have a unique item they want to try to sell, I am open to that," said Schiller. "That adds uniqueness to the store. If people are downsizing or moving or if they are just finished with an item, whether it's a book or a flight suit or jacket, why not share with people in the industry? If they want to move the item, they can do it here."

Even as a volunteer at Anoka County Blaine Airport over 21 years ago, Schiller formed a strong opinion based on observation.

"We just have to have an aviation retail store."