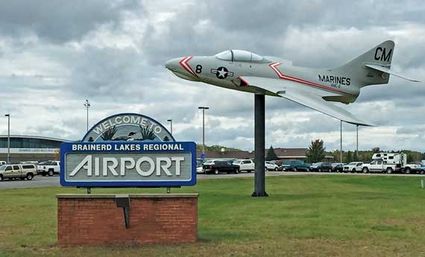 Mark Nesheim has such a passion for cooking Classic American Café that he opened a restaurant serving the international jet set. Kimmy Fox, Nesheim's, business partner serves Nesheim's "amazing food" in Wings Airport Café at the Brainerd Lakes Regional Airport. Both relish giving visitors that Minnesota experience as soon as they step off the plane.

Real mashed potatoes, homemade bread, soup from scratch, wild rice, fresh Walleye, and a variety of hot dishes are all part of the Minnesota flair at the cozy restaurant tucked between the commercial airport terminal and NorthPoint Aviation, the general aviation FBO.

"That's what I'm all about," said Nesheim. "I've always like cooking for the working class. I'm not into fufu food. I can cook it. I've done enough of it. If I had to resurrect it, I could, but I just like cooking plane old American food for the regular Joe. The people who come into this place, they appreciate that. That's the kind of food they're looking for."

Brainerd born Nesheim's experience in the field began as a dishwasher at a local country club when he was just a sophomore in high school. In his junior year, he started cooking, beginning with the basic deep frying method, then moving to more sophisticated systems as he gained experience at a variety of specialty restaurants through the years. He picked up the ability to create French and German cuisine, cook seafood, make meals in a wok, and to work with organic foods.

As his chef experience increased, Nesheim also moved into positions of kitchen manager, then general manager where he had responsibility for training, scheduling, and ordering. Though his first venture into business on his own with a small restaurant "in the middle of nowhere" in Wisconsin did not meet with the success he sought, Nesheim persevered.

While working as a chef at a restaurant called The Skillet, Nesheim met Kimmy Fox, a plucky waitstaff person, also a native of Brainerd, with whom he engaged in serious conversations about owning a restaurant. When Wings Airport Café became available, Nesheim and Fox decided to go for it.

"It came up on Craig's List and it was affordable," said Nesheim. "We actually had the means to pull it off. Thirty days after our inquiry, we were in it. That was July of 2014. We've at least doubled the business since we started and it's still growing leaps and bounds."

The strong work ethic and organizational skills of both business partners is partially responsible for growth in their business.

"When we came in, we always felt that consistent hours were important," said Nesheim. "If you say you're open, you're open, whether there is anyone here or not. Originally we opened at 7 a.m. but it didn't take long to open earlier than that."

In fact, it was the third day of their operations when they expanded hours. Wings Airport Café is officially open from 5:30 a.m. to 3:30 p.m., though there are times those hours are adjusted as well.

"That goes for the end of the day, too," said Fox. "If we're closing and the gate isn't actually shut, if someone wants something, we'll make it."

Since Brainerd Lakes Regional Airport receives aircraft from around the globe, customers at Wings Airport Café are often international. Nesheim and Fox accommodate each person to the best of their ability. When Nesheim was asked to make stuffed grape leaves for an occupant of an incoming private aircraft, he gave it his best shot.

"I looked it up, made it, and hoped for the best," said the experienced chef.

Fox recalls serving a Japanese customer who took a photo of his eggs so the next time he came in, he showed her the picture on his phone so she knew how he liked his eggs cooked.

"It was awesome!" she said.

Catering to private aircraft is another outlet for business at Wings Airport Café, one that involves NorthPoint Aviation General Manager, Joe Birkemeyer.

"We have a lot of corporate customers that come in and Wings handles all the catering orders," said Birkemeyer. "It's pretty much seamless. We hand off the catering order to them. Then, we're the ones who bring it out to the pilots. I think Wings Airport Café is a huge benefit for aviation in general, NorthPoint Aviation, and the community. Wings has a good client base who not only flies in, but drives in here daily. They do a great job."

Common sense would say Wings Airport Café is a success due to air traffic at its location. However, competitive pricing has picked up a following from the city as well.

According to Brainerd Lakes Regional Airport Director, Steve Wright the airport benefits from the restaurant's presence.

"The Wings Airport Café being at the airport is a definite plus," said Wright. "We get to see pilots flying in from all over the region, so, not just Minnesota, but other states come into enjoy Wings Café. Mark and Kimmy have done a great job building a good customer base, both on the pilot side as well as in the local community. It's been a good destination spot for people to come out and enjoy aviation and see the airplanes and dream about flight."

Due to the growing business at Wings Airport Café, and increased air traffic at NorthPoint Aviation, plans are currently in the making for a new general aviation Arrival and Departure facility as the two entities currently share the same entrance. 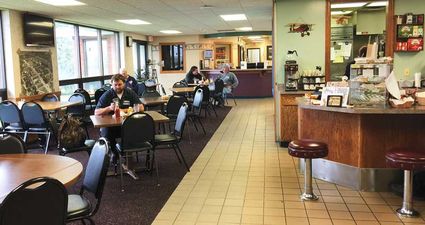 Wings Airport Cafe customers include Airport and FBO staff, travelers, aircraft personnel, and numerous townsfolk who enjoy a home cooked meal and the chance to chat with visitors from around the world due to the airport's international status.

The summer of 2018 will see a huge influx of visitors to Wings Airport Café due to their sponsorship of a stopover of the American Barnstormers Tour. Ten antique Travel Air biplanes will layover at Brainerd Lakes Regional Airport on their trip across the Midwest en route to EAA AirVenture in Oshkosh, Wisconsin. The planes will gather July 15-17, offering visuals sure to please hard core aviation aficionados and entice new fans into the fold.

Mark Nesheim and Kimmy Fox of Wings Airport Café plan to serve the best American food during the course of the exciting three-day event, an event which has roots deep in the growing of America itself.