This is part one of a two-part dissertation by freelance writer, Jim Hanson regarding his experiences with and impressions of the late Captain Winthrop "Lee" Bradshaw 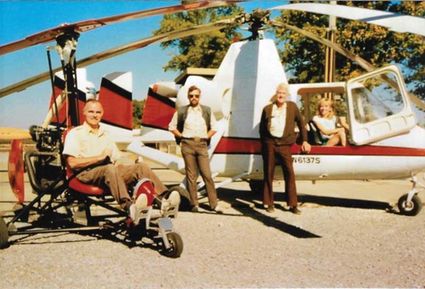 He received not only his gyroplane rating, but instructor rating. He owned two gyros, including the larger Air & Space 2-place

Lee was born on December 17, 1933, 30 years to the day after the first flight by the Wright Brothers. He joined the USAF in 1951, and after being discharged in 1955, went to Parks College of Aeronautical Technology in St. Louis, graduating with a BS in Aircraft Maintenance Engineering. Lee was hired by Northwest Airlines in October 1958 and moved to Minnesota, and lived here ever since.

Lee was one of those people who keep crossing our lives-like the characters in old Hollywood epics like "How the West Was Won." We see them in one venue-move on-only to run across them again and again.

I first met Lee at Waseca airport in the early 1970s. They were having a small airshow, and Lee was going to do an aerobatic performance in his Pitts Special, and I would be dropping skydivers from a Cessna 206. We were introduced at the required FAA Safety Briefing. The skydivers were to follow his act, so we took off together-I would climb to altitude while Lee did his low-altitude performance. I was climbing through about 1800 feet, and I was watching his performance from above and to the side when I saw the crash. He had pulled up into a loop, and entered too low. He almost pulled it out, but the aircraft impacted on the airport going at high speed-ending up on the far side of the airport away from the crowd. I told the jumpers "we have to land, there has been a crash on the airport." Skydivers (being skydivers) wanted no part of landing with the airplane, and announced they would be leaving. "TOO LOW!" I told them (2000 feet is normally the minimum opening altitude for experienced jumpers). They left anyway. I spiraled down at high speed, landing on the runway closest to the wreckage. The local Fire Department was on the way out and arrived just as I did. It didn't look good. Three of the four wings had been ripped off in the crash, and the rest of the aircraft was badly damaged. Lee had the misfortune to crash, but luck was still with him-the Fire Department had received a "Jaws of Life" extractor, and only mounted it the day before. They cut him out of the wreckage. Lee was unconscious, and badly injured. A Minneapolis TV station erroneously reported that he had died in the crash. After regaining consciousness, the family was told "Lee will likely never walk again." After a long period of physical therapy, Lee did in fact walk again-with pain-but it looked like his aviation career was over.

Lee wanted to get back in the air again, any way he could. Glider pilots don't require an FAA medical certificate, so flying gliders was the most likely way for him to get back in the air. He qualified for his Commercial glider license, proving that his injuries did not prevent him from flying gliders. He went on to get his Glider Instructor rating.

It was during this time that I ran across him again. He attended a glider meet at Albert Lea, and in talking to him, I mentioned that I had been at Waseca when he crashed. I asked about the crash-he replied "I was just too low, and I knew it." I asked why he didn't roll off the top of the loop. "I was programmed to fly that maneuver, and was focused on it-it never occurred to me." No excuses-just the facts. He mentioned flying gliders as he didn't need a medical-I told him that balloon pilots don't need one either, and gave him a ride in my balloon. It wasn't long before he had a balloon and commercial balloon rating himself.

Based on his demonstrated ability to fly gliders, Lee felt that he qualified for a medical certificate for airplanes. The FAA was cautious, but agreed with his argument that if he could fly and instruct in gliders, he ought to be able to fly airplanes, and issued a third-class medical. That meant that he could FLY airplanes, but not instruct basic students without a second-class medical. The Airmen's Medical Examiner in Oklahoma City refused his request for the second class medical, stating that he had not demonstrated "fine motor skills."

Lee was determined to fly for hire again. We talked by phone several times about how to overcome the FAA obstacle. He asked me about the skills needed for flying helicopters. I told him that since helicopters have 3 degrees of motion, they have virtually no stability. Lee resolved to get his Private Pilot Helicopter rating to help make his case that he could indeed fly at an advanced level. After demonstrating that he could perform to Commercial Helicopter Flight Test Standards, the objection that he didn't have "fine motor skills" fell flat. The FAA issued a Second Class Medical. Lee immediately obtained his Commercial Helicopter and Helicopter Flight Instructor rating.

Having the Second Class Medical still would not get him back in the cockpit of a jetliner, however. He would need a First Class Medical-and the FAA was taking a "wait and see" attitude. He flew voraciously, and also became a ratings collector. He decided to get his Gyroplane rating, and Gyroplane instructor. He purchased a gyroplane, and obtained his ratings. He also added an Airplane Multi-engine seaplane rating (another rare rating) to his Commercial certificate. He continued to instruct in gliders, and the FAA made him a Designated Pilot Examiner, and it was here that I intersected with him yet again-I took my Glider Instructor test from him.

Lee loved to fly, and it led to yet another encounter with him. He expressed a desire to have a floatplane, but was wary of being able to physically jump from the float to a dock. I gave him a ride in my Lake Amphibian-we talked extensively about the airplane, and in a few weeks, he announced he had bought one. I checked him out in it for his required insurance experience. A dozen years ago, I purchased yet another Lake in Yellowknife, North West Territories of Canada. A fan of flying the Lake, and always open to see more of the unexplored Arctic, Lee volunteered to fly it back for me. 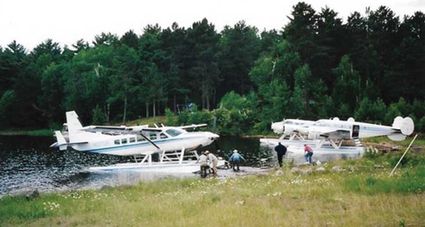 Of all of his airplanes, the Lake was one of his favorites-not just for the air and water experience, but because it took him to places where few people have ventured.

See part two of this essay in the December issue of the Minnesota Flyer magazine.