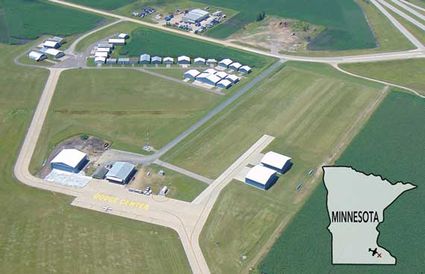 "A Solid Foundation" is the Dodge Center City motto. That's appropriate since the largest employer in town is Oshkosh Corporation, owner of the former McNeilus Truck factory. It's one of the largest manufacturers of Ready Mix concrete trucks in North America. McNeilus also makes trash-hauling equipment. That's garbage trucks, not cargo planes.

The City got its name for being in the center of Dodge County. For some reason, the county was named after the Governor of Wisconsin, Henry Dodge. Dodge Center was first settled by Europeans in the 1850s and incorporated in 1872. In the beginning, it was a rail hub for shipping grain from the region's farms.

Later, it became a commercial center. Local industries began processing grain into high quality flour. By the middle of the twentieth century, Dodge Center was a power house in High School athletics. The Dodgers football team did not allow their opponents to score a single point during the 1952 season. Following the school consolidation movement in the 1980s, the Dodgers became the Triton Cobras. However, they kept excelling at football, The 2006 Triton team holds the Minnesota record for most points scored in a championship game (70!).

About the time the high school started excelling at football, the city was anticipating the boom in aviation that was sure to follow World War II. In 1946 an Airport Commission and Zoning Board were organized. By 1950 the airport was up and running with two turf runways.

A Father's Day Fly-In soon became an annual event, the first being held in 1960. The Dodge County Flyers originally organized the fly-in breakfast, but the club disbanded in 1998. Fortunately, the airport hosts a very active chapter of the Experimental Aircraft Association (EAA) and they took over the fly-in in 1999. Some interesting aircraft are usually present.

In 2016 the fly-in featured a B-25 from the Commemorative Air Force (CAF). Proceeds are used to support EAA programs, including the Young Eagles Program which offers free airplane rides as an introduction to aviation for youth.

Over the years, the Dodge Center Municipal Airport has kept pace with advances in General Aviation. The main runway has been extended three times, most recently to 4,500 feet in 1992. Appropriately, it was paved with concrete as part of that project.

There's a full lighting system including Runway End Identifier Lights (REILs) and Precision Approach Path Indicators (PAPI). GPS approaches to both ends of the runway provide guidance when the weather isn't too hot, plus there's a VOR-A Approach for those of you who still know what that means. An automated weather system (AWOS) will tell you if you need to use any of those procedures.

For the tail-dragger crowd, the second runway (2,400 feet) is still turf. It's not plowed in the winter in order to accomodate ski friendly operations.

The Arrival/Departure building was constructed in the 1990s, and has meeting space plus a flight planning area. Full service maintenance is available. The self-service fuel system dispenses both aviation gas and jet fuel. The apron has plenty of parking space. A large hangar is available for short term storage. Dodge Center currently has 45 based aircraft, but hangar sites are available for aircraft needing a long-term home. 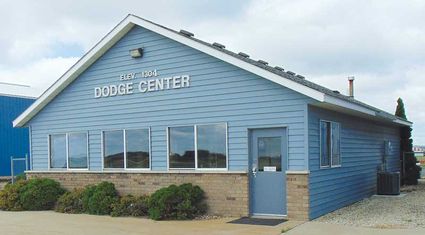 Dodge Center is the birth place of artist Shirley Ardell Mason. She graduated from Dodge Center High School and was well known in New York art circles in the 1940s and 50s. Ms. Mason later taught art at an Ohio University, but became nationally known for supposedly having multiple personalities. Her life was the subject of a book named Sybil which was later made into a movie starting Sally Field and Joanne Woodward. Those are two of the great actresses of the 20th century, but about the only aviation connection here is Sally Field who played the role of the Flying Nun in the 1960's TV series of the same name.

McNeilus offers tours of the truck manufacturing plant if you call ahead. Besides the concrete mixer and trash hauler business, Dodge Center employers also include a steel fabricator. It's not that far from the airport to downtown Rochester, making Dodge Center a GA friendly destination for people doing business there.

All that means the airport is busy, with over 5,000 annual operations. If you're there for fun, there are four eating places within a mile of the airport; the golf course is just across town; a courtesy car is available at the airport, and rental vehicles are available. In any case, you can get you where you need to go.