Ricks Aviation Adventures, Rick Mercil, CFI, CFII, MEI, ATP spotlights student's success in an article encouraging people to learn at their own pace, in their own time, in their own way, always with the goal of joy in the process. 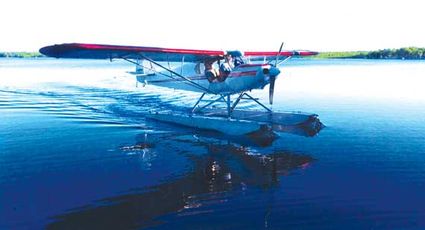 The joys of flying typically bloom in the summer for most pilots. They finally open their hangar, get some light to shine on that bird and clean off that layer of dust that forms from months of hibernation.

For me it's a little different. My Supercub stays on its floats all winter. It makes its way into the shop two or three times throughout the winter for minor maintenance and/or a new mod here or there. The Cub is a working airplane and winter is a time to get it tuned up and dialed in for another float flying season.

The float flying season is special for me. It is fulfilling a dream of having a working airplane of my own. I never in my wildest dreams thought I would have my own airplane, much less a Supercub on Amphibs and share the experience with like minded pilots.

This summer was filled with great students. There was Mike, the retired Delta Captain of 30+ years. Seeing Mike wiggle his way into the small cockpit of the Cub was enough to get me to chuckle in the early cool May mornings. Mike had a level of enthusiasm that pushed me as an instructor pilot to make sure his experience was special. Going from an A320 to a Super Cub had its challenges. It wasn't without some encouragement during this transition that my instructional experience was tested. But Mike was a true professional pilot, he studied hard. His smile never left his face throughout the training process. Needless to say it was a lot bigger when he returned from the checkride, he nailed it!

There was Todd, the farmer. As a natural stick and rudder guy, Todd was one of those students who you only had to tell him once and he was able to process the required inputs to get the task completed to an acceptable standard. Todd was so easy going it was hard to tell if he was having fun. He came out of the room where he had done the oral portion of the exam with a smile so I knew he was on track for a good flight check. After an hour or so he too taxied up after the checkride. I met him and the examiner and they both gave thumbs up, a smile filled all our faces.

Kim and Ken were buddies that tackled the rating together. They studied hard and came super prepared. Both own airplanes and both gave a 100% in their training. A little older than average, they had developed their own style of flying. I found I had to recondition some behaviors but they accepted the instruction, made the necessary adjustments and both passed their checkrides with flying colors. It was great to see older guys challenge themselves with a new rating. These guys are special!

My next students were Ross and Dawn. Ross is a flight Instructor working toward building hours to get an airline job. Dawn is a Kindergarten teacher and received a scholarship from Wipaire to add a Commercial Sea plane rating to her certificate. Ross was one of those students who was used to studying. He not only read all my material but challenged me on some interesting points. But with 39 years under my belt I always save a few "tid-bits" of knowledge to counter for guys like Ross. His flying was spot on. Making adjustments along the way and progressing at each lesson. Ross pounded out the rating in just a couple of days. Very focused and committed.

Dawn was special. She was quiet but self-assured. She had been getting her various pilot ratings over the last few years so she was use to receiving instruction. However what I wanted more than anything was to see Dawn become more assertive. She had become use to having someone next to her giving direction. So we worked on having her become more of a PIC, flying the airplane instead of letting the airplane fly you. In the end I told her to pretend she was mad at her husband...that worked! Dawn took control and never gave it back. Learning how to fly floats was a byproduct of our instruction, I really think she became a better pilot when she realized she was the PIC. She came back after her check with the same smile I had seen on other students. I was so proud.

In the heat of August Dr. Matt started his training. A 150 hour pilot, Matt had a great attitude and a zest for life. He jumped in with both feet. I noticed immediately he was a bit preoccupied. Something was interfering with the learning process and we needed to identify this barrier. The second lesson was similar to the first. A struggle to get control and order established as PIC. Prior to our third flight I sat Matt down and realized he had his plate full with patients. I also learned his business partner at the clinic had just passed away. We visited about this and how it was influencing his performance. It was a great lesson for both of us. The opportunity to see how stress can impact performance was clear. We both agreed to put the rating on hold for a few weeks and return in the early fall towards the end of the float flying season. This decision alone shows the professionalism of Dr. Matt and supports my impression that he will be a fun student and a great Seaplane pilot. 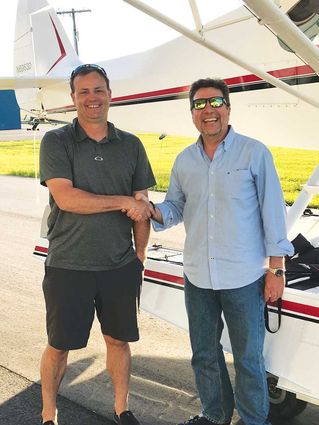 Todd Yahna with Rick Mercil after completing his checkride.

As the summer months came to an end and the trees started to change colors, a young farmer and spray pilot named Aaron came in and wanted a float rating. Aaron had one issue, he was hearing impaired. This presented a new challenge for me as a flight instructor. In my 39 years I had never encountered a challenge quite like this in the cockpit. I acquired a small dry ease white board and away we went. Aaron was a good stick. It was obvious his crop spraying skills translated to float flying and he handled the airplane with confidence. I require my students to confirm the gear position on downwind, base, and final legs with a call out "four blue lights, gear up for water landing-confirm." Aaron and I worked out a different system; he would hold up 4 fingers ( 4 blue lights) and I would tap his shoulder confirming the gear position. I went through two dry ease markers during our training but it was worth it. Aaron did a great job.

Another season for float flying has started to wind down and so is my student load. Each year I wonder who is going to want to add this fun rating to their certificate, and every year I get a group of great students from all walks of life. How do I sum it all up?

Man I love this stuff! It's a dream come true.