Hector Airport does it again! 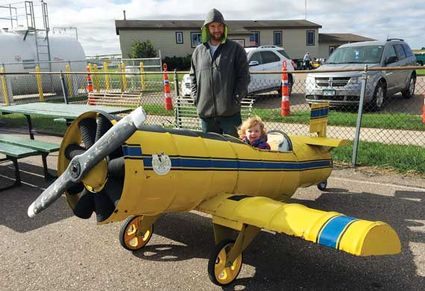 Addison (2) enjoys some imaginary flying in a well constructed kiddie plane built by Ed Newberg and his three sons out of a Huffy Bicycle and oil barrels. Dad Bobby Anderson keeps an eye on his daughter so she doesn't take off and end up in their home town of Dassel without him. How would he explain that one to mom? The days activities included a great breakfast, a multitude of aircraft to see in the air and on the ground, child friendly activities like the annual ping pong ball drop, toy airplanes to toss, and prizes for all the boys and girls to take home.

Event organizer Ed Newberg issued an invitation to Afton, Wisconsin residents Barry Hammarback and Dave Schmitz to bring their 1962 UH1 "Huey" helicopter. The Huey has attended veteran's and other aviation related events to allow new generations to become more aware of the experiences of their father's and grandfather's.

"We thought the Huey is probably the biggest symbol there is of the Viet Nam war," said Hammarback. "Ed Newberg asked us if we'd bring it down and we said we sure would."

Not only was this 1962 UH1 Huey available for close up examination, it also provided many attendees a rare take off, hovering, flying, landing experience courtesy of crew members Bob Drallmeier, Robert Smith, Dennis Hoffman, and Jerry Chapman. The aircraft is owned by Barry Hammarbackof River Falls, Wisconsin and Dave Schmitz of Spooner, Wisconsin.

Flying a Huey had been on Newberg's Bucket List since he was 15 years old. Though a medical deferment due to spine issues kept Newberg from Warrant Officer Candidate School, he went on to get his private pilot license and a list of rating, established Newberg Sky Spray, and has been flying for over 40 years. September 17, Newberg put a check mark next to the Fly a Huey item on the list...done!

"It was awesome!" said Newberg. "I flew a Cobra about two years ago, which is pretty similar as far as how they fly, but what I always wanted to do since I was a kid is fly a Huey."

The Hector Fly-in is a particular favorite of children as Ed and Connie Newberg provide a Ping Pong Ball Drop in which retrieved ping pong balls may be exchanged for prizes.

The official count by airport safety advisor Glen Weible came in at 175 aircraft for the day. The Hector Lions Club served 1,462 meals, raising $11,800. Of that, $10,000 was donated to a young resident of neighboring town Bird Island, as she fights a battle with Leukemia.