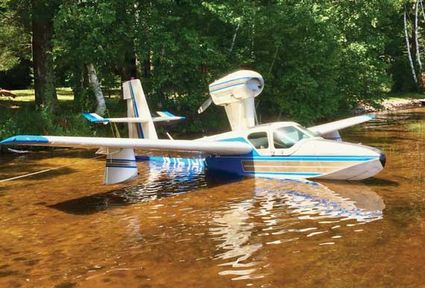 This is the Lake Amphibian flown for this article. With seaplanes, pilots are often operating below congested traffic-and since ADS-B towers only handle line of sight traffic, pilots should keep their attention outside and enjoy the serenity and the view.

I've been flying with ADS-B IN for over a year now. I use a Stratus 2S receiver linked to Foreflight Pro on my I-pad. I chose to go the portable route, because I fly a variety of airplanes-from a King Air to a Kitfox.

WHICH IS BETTER XM WEATHER OR ADS-B?

Since most of my time is spent IFR and cross country, the system does a fair job of depicting weather data and precipitation. It's nice to have weather updated enroute. I also have a Garmin 496 with Sirius XM weather subscription. Which is better?

• I like the XM precipitation depiction better-it is "smoother" and less "pixelated" than the ADS-B product.

• Update times are about the same-but the advantage again goes to XM when flying low or in the more sparsely populated area, due to the XM being satellite-based vs. tower-based ADS-B, which is limited to line of sight.

• Presentation-being able to get the display on a larger format, like an I-pad, means that you can overlay weather on the VFR map or IFR chart-or better yet, on your approach plate. That's a BIG advantage for ADS-B vs. XM

• ADS-B also gives you traffic-more about that later.

• Convenience in the cockpit. In most airplanes, an I-pad is too big. Yes, you see a number of mounting devices for sticking to windows and control yokes, but an I-pad is just too big. It blocks the view of instruments, and if mounted near a window, it blocks the outside view. The necessary power cords are particularly distracting. An I-pad Mini is more the right size and is easier to mount-many airplanes have enough panel real estate to mount it right in the instrument panel with a quick-detach mount. Placing the I-pad on the co-pilot seat doesn't really work, either-especially if using it for maps and approach plates. I-Pads also tend to overheat if exposed to the sun. Most of these objections are eliminated if the unit is panel-mounted and an avionics cooling fan is used. The portable XM is usually small enough to be either mounted on the glareshield or on the yoke.

So, which is "better"? If you are flying low or in a sparsely populated area (especially Canada), the XM will give you weather where ADS-B won't. If you want weather depicted on your approach plates, ADS-B on your I-Pad-in concert with Foreflight or other chart provider-is superior. For cost-ADS-B is the hands-down winner. And then there is the issue of traffic advisories.

One of the big selling points on ADS-B is the ability to receive traffic advisories from ADS-B out compliant aircraft. Who wouldn't want that? WARNING-a "There I was" Story" follows!

I had a meeting at the Buffalo, Minnesota airport this Spring. Buffalo is located just outside the Minneapolis Class B airspace. The direct route would pass under the "overhang" of the Class B airspace-maximum altitude 4000' MSL, or 3000' AGL. Buffalo is only 91 n.m. north from Albert Lea. As an FBO, I have a lot of choices on which airplane to fly. Given that it was only a short flight, I elected to take my Lake Amphibian on the trip-a chance to exercise it after it had been dormant all winter long. On this short trip, the difference in time would only be a few minutes vs. taking a faster airplane-besides-the weather was good, and who WOULDN'T want to be flying a seaplane in Minnesota in the springtime?

I normally file IFR if going anywhere near the Minneapolis Class B airspace. It's just easier-you don't have to play "20 questions" ("what's my N-number, what's my type of aircraft, where I'm located, what's my altitude, where I want to go, etc.)-when filing IFR, all that information is already known to the controller-and you'll get traffic advisories right from the start. This was a short flight, however-and in a seaplane on this short flight, I didn't want to have to climb to IFR altitudes. Seaplanes should be flown down low whenever possible-flying high "just ain't natural!" In order to have a legal chart onboard, I took my I-Pad, loaded with Foreflight and connected to my Stratus 2S-a chance to look at the synthetic vision depiction of lakes, roads, and towers at low level.

I climbed to 3,000 feet MSL (2000 AGL) and motored out at a stately 112 knots-checking every lake enroute for places to visit sometime. The Stratus system did a good job of depicting lakes at this altitude-I was enjoying watching it perform. Southwest of the Class B airspace, I looked up and happened to notice an airplane 45 degrees off my nose at my same altitude-and getting bigger rapidly! Normally, relative motion of the target airplane makes it easier to see-but in this case, we were perfectly synchronized-no relative motion. No time to turn-I dived-and the Comanche passed overhead only 100 feet above-so close that I could see that he had been leaning the engine properly by the gray exhaust streaks on the belly.

After the passing, I checked the ADS-B traffic-no, like me, he was not "participating" due to lack of ADS-B out. Acutely aware of the need to check traffic, I looked at the ADS-B for any other potential targets ahead-there were three of them about 6 miles ahead-200' below, 300' above, and 400' below. Their changing tracks and varying altitudes seemed to indicate that they were aircraft doing air work. I considered going lower, but I'd have to lose almost 1000' in the next 6 miles to maintain separation-and there was no guarantee that they wouldn't ALSO be losing altitude. I altered course 90 degrees for 5 miles to avoid them

By the time again turned toward Buffalo, I noticed that there was a target at my 6 o'clock and 4 miles-1000 feet above, and descending-his overtake speed was 80 knots. A re-check a moment later indicated he was now at 3 miles-and was only 600' above me-descending. I thought about making a turn, but that would increase the overtake speed (after all, he was doing 3 1/2 miles a minute!), and I would be blind in the turn to look for him. I pushed down-FAST. Another check found that he was now 2 miles, and 400' above, despite my descent-he was going down faster than I was! I pulled power and descended faster-he was now at 1 mile and 300' above-still descending. The Baron passed over me by perhaps 300' while I was descending through 1000' AGL-I'm sure he never saw me. He was probably descending to clear the Class B altitude restrictions while VFR. Was he talking to ATC? We'll never know.

I'd picked up the ATIS at Buffalo-I was perfectly set up for the practice GPS approach to runway 36-I just wanted to fly the procedure to see how the Synthetic Vision system on the Stratus/I-pad combination looked. I announced my intentions and monitored for traffic starting 10 miles out. On a 1 mile final, I visually picked up a non-radio Cub turning downwind to base leg in front of me. I pitched out-flew an upwind/crosswind/downwind leg, and landed.

FOUR traffic encounters in less than 20 minutes! I sat down to review them:

• With the Comanche-the lessons re-learned were: Not everyone is "participating" with ADS-B-and they never will. Aircraft without electrical systems aren't required to have it, and it is not required outside the Class B airspace unless over 10,000' MSL. Only a small percentage of aircraft are currently equipped, and for many pilots, there is no compelling need for ADS-B unless you plan on flying within the lateral boundaries of Class B airspace.

• The ADS-B system worked well pointing out the gaggle of flight training aircraft at or near my altitude. The diversion around them was easy.

• The Baron overtaking me was unusual. Normally, I fly a King Air, and since I'm likely traveling at or close to the 250 knot speed limit down low, it's usually ME that's doing the overtaking-focusing on traffic in front of me. The ADS-B information on being overtaken from behind may have been a lifesaver.

• All three of these encounters were likely due to the "compression effect" of forcing airplanes into lower altitudes to accommodate the main airport. That means that airplanes are going to be forced into less airspace-reducing clearances. Keep your head on a swivel when operating below the mandated altitudes of Class B airspace. Use your landing lights when in congested airspace-they are much more visible than strobes.

• Despite best efforts, the non-radio Cub in the traffic pattern and my aircraft on a practice approach had every right to be there. Since the Cub had no radio, neither of us were aware of the other. Which of us had priority-the aircraft "in the pattern" or "the aircraft on final approach"? It can be argued either way-but the best thing is to break off and avoid the conflict.

• Even with ADS-B, some of this could have been ameliorated (if not eliminated) by going back to participating in the "old-fashioned" transponder/Mode C/radar system. While issuing VFR traffic advisories is secondary for ATC, most are able to work them in. That system works-and would have given warning of the first 3 encounters-had I been participating.

1. "Mark I eyeball"-"old style ATC advisories"-ADS-B. Use all of the help you can get.

2. That said, don't count on others to point out traffic.

3. Don't fixate on ADS-B inside the cockpit-only a small percentage of traffic is displayed.

4. Be careful of the "compression effect" of Class B airspace forcing more airplanes into smaller altitude segments.

5. Use landing lights to increase your visibility.

6. Consider flying low when transiting underneath overlying Class B airspace-almost all traffic will be above you, and most will not be transitioning through your altitude. 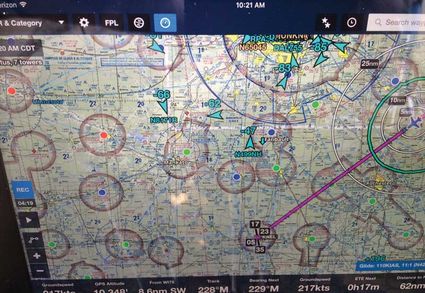 Note the traffic congestion underlying the Class B airspace in the Metro area--and the training aircraft near Mankato. The rest of Southern Minnesota is relatively clear, but there is plenty of non-participating traffic NOT shown. Don't be complacent--get advisories from ATC, and keep your eyes outside the cockpit for "non-participating" traffic.

7. Recognize that some users of the airspace (aircraft with no electrical system, gliders, low-altitude aircraft, geese, etc.) will never have to equip with ADS-B-they will always be invisible to it.

After the meeting, I got back in the Lake Amphibian to return home, turned on the landing lights, got up to my cruising altitude of just 1000' AGL, and never saw another airplane after I left the traffic pattern.

Postscript: Shortly after this flight, I made another flight to the same destination in this same airplane, THIS time filing IFR for the traffic advisories on this marginal VFR day. I received numerous call outs of traffic from Approach Control--traffic that was not visible in the haze, and which did not show up on the ADS-B. The lesson (re)learned--"Use all the help you can get!"

Jim Hanson is the long-term FBO at Albert Lea, Minnesota. Now in his 55th year as a pilot, Jim is no Luddite when it comes to adopting new technology, but he DOES believe that sometimes "the old ways were better." If you'd like to help Jim adapt to the 21st Century, he can be contacted at his airport office at jimhanson@deskmedia.com or 507 373 0608. Home number? His wife Maryalice says "Jim lives at the airport."