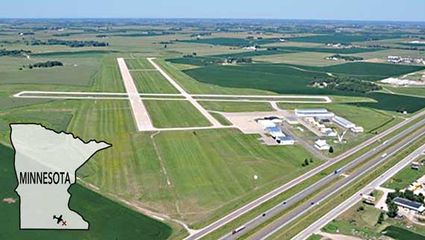 Even if you went to school 50 years ago in some exotic place like New York, there's a good chance your ring or year book came from Owatonna. Jostens (aka, Newell Brands) is probably the country's largest manufacturer of scholastic memorabilia. Founded in 1897 by Otto Josten, the company is just one of several that make Owatonna an economic success. Other local industries include tool manufacturing, insurance, and fabricating heating/air-conditioning equipment.

One important reason for the success of the local economy is the Owatonna-Degner Regional Airport. It's what a business-oriented airport should look like. The 5500-foot-long primary runway has an Instrument Landing System (ILS) and full approach lighting. The second runway is paved, lighted and 3000 feet long. Besides the ILS, Owatonna has several GPS procedures. Another approach uses the "Half Way" VOR, so called because it's located about the same distance from Faribault, Owatonna and Waseca. An Automated Weather Observation System (AWOS) is on the field, and a Remote Communications Outlet (RCO) provides direct radio communications on the ground.

Land-side facilities are equally convenient. The airport has plenty of hangar space for both overnight or long-term storage, and a large ramp offers short term parking. The modern terminal building has meeting rooms, a pilot's lounge, and a flight planning area. Wireless internet and satellite television are also available. Fuel service (both Avgas and Jet Fuel) is a 24-7 operation, and there's complete aircraft maintenance if you need some work done. Courtesy cars can be reserved for ground transportation, or there's taxi service if you'd rather not drive. You can also rent a car for longer visits.

At the end of World War II, Glenn Degner, Tom Walsh and Joe Dulac were serving together at the Naval Air Station in Pensacola, Florida. The three decided they should go home to Owatonna and start a flying service. They had the skills. Degner and Walsh were pilots. Dulac was a mechanic. The problem was Owatonna didn't have an airport. The three veterans set up shop temporarily in a farm field while the City built an airport. Operations began at the current site on July 14, 1947. There was a brand-new hangar and four turf runways. Degner was appointed airport manager and continued in the role until 1974. Under his leadership the airport continued to develop, adding more hangar space, plus paved runways and taxiways. On January 1, 1988, the Owatonna Airport was dedicated as Glenn J. Degner Airfield.

Another series of improvements were implemented in the 1990's. The City of Owatonna, the State and the FAA invested over $15 million to bring the airport to the current configuration. Ceremonies are popular in Owatonna, so they held another one in August 1999. To reflect a greater role in the state system, the airport was renamed Owatonna-Degner Regional Airport.

Just because an airport has a business flavor, doesn't mean you can't fly there just for fun. For the $100 hamburger pilot, there are several good eating places within a mile of the airport. A larger sporting goods retailer offers free transportation to their store location. The City has a municipal golf course.

Owatonna is an anglicized version of the Dakota name for the Straight River, which is a prominent feature of the local topography. Kaplan's Woods Parkway is on the river, and offers biking, hiking and skiing trails. Owatonna is also the name of a legendary Dakota princess who restored her health by drinking from the local mineral springs. Today her statue stands in "Mineral Springs Park" where the water is still healthful and refreshing. Other attractions include the Owatonna Arts Center and the Steele County History Center. 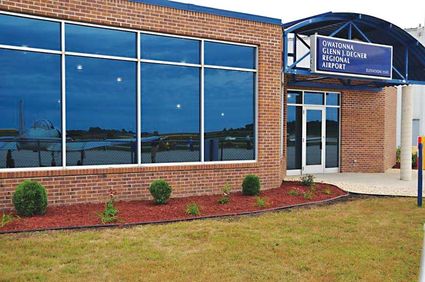 Kaplans figure prominently in local history. Josef Kaplan was one of the first settlers in Owatonna, and an early advocate for the rights of Native Americans. Godfrey Kaplan started a major tool manufacturing company. Ruben Kaplan invented the "universal gear puller." R.W. (Buzz) Kaplan was a well know Owatonna pilot who built a replica of the 1928 Sikorsky S-28 flying boat from scratch. Buzz Kaplan was a 1999 inductee to the Minnesota Aviation Hall of Fame.

Owatonna has two other Hall of Fame Inductees. Andrew Neuman was an Owatonna native who made a reputation providing air ambulance services to the medical community in Rochester. Gary Underland was a local agricultural operator who became an expert at restoring antique aircraft, including several owned by Buzz Kaplan. A City with such a wonderful aviation heritage is the perfect place for an outstanding facility like the Owatonna-Degner Regional Airport.