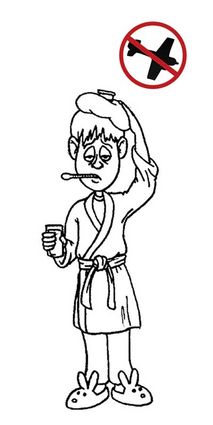 March 29 this year, a Boeing 737-300 (AA 1353) was on short final heading into KABQ down in Albuquerque when the First Officer suddenly slumped forward, unconscious. Fortunately, the Captain noticed, summoned paramedics, and landed the plane safely. Attempts to revive the First Officer were unsuccessful, the presumed cause of death being a heart attack. Fortunately, life-threatening incapacitation of pilots in a commercial setting is rare. Even more rare is the flight's safety being compromised.

A recent report of the Australian Transport Safety Bureau estimates that flight crew incapacitation occurs about once in every 34,000 flights . Over half of all pilots going down for the count did so with a gastrointestinal illness-the heaves or the trots or any combination thereof. This could be due to food poisoning from that street vendor in Tijuana or from contact with an infected person. Next most common cause, at 13percent, is from laser strikes. You'll remember last August we talked about those idiots who think it's fun to laser an airliner on final. A number of other things happen less frequently such as ear blockage, faintness and general weakness, headache, vertigo, hypoxia from depressurization, smoke and fume inhalation, micro-sleep from too many re-eye flights and, of course, heart attack and stroke. Bottom line, you'll probably survive that flight back from Cancun even if Montezuma's Revenge strikes the cockpit.

As you might guess, the picture in General Aviation is not so rosy. For openers, you usually have only one pilot. For another, training levels and medical fitness requirements are lower than in airline transport. The Aussies found GA pilots suffered from a wider variety of causes of incapacitation ranging from hypoxia to heart attack. Furthermore, 70 percent of pilot incapacitation incidents in GA lead to either a return to the airport or collision with terrain.

Speaking of heart attacks, way back in August of 1987, the FAA released a report looking at sudden in-flight incapacitation in GA. They found almost 40 percent of fatal accidents from pilot incapacitation were due to trouble with the ticker-heart attack or angina. They found the incidence of heart attack increased markedly in the over 50 pilot population. Drugs and alcohol were in second place, followed by a number of other factors-hypoxia, cockpit fumes, etc. As with the airline guys, a lot of GA folks have trouble with the trots and the heaves.

So, what's a GA pilot to do to increase the odds of getting from here to there without conking out in the cockpit? Like so many things in life, it's a matter of applying what you already know...putting into practice that time honored pneumonic for pre-flighting the pilot: I'M SAFE.

• Illness- Do you have Deli Belly? A cold or fever? Chest pains? Do you just feel crummy? Might be better to see your doc than your C172.

• Medication- Are you taking something that might make you drowsy, dizzy, nauseated, nutso? That cold remedy might not cause too much trouble on the ground but could make you bonkers at 12,000 MSL.

• Stress- Pressures from home or work? Even worse, pressures to complete the mission no matter what? Gotta-get-there-itis has taken down more than one pilot.

• Alcohol- Remember 8 hours from bottle to throttle. If you really tied one on, stretch that out a little more.

• Fatigue- Up partying last night? A couple of cups of coffee can only do so much. Oh, and if you have a little cold and took something for it, fatigue can magnify the effects of illness or medication.

• Emotion- If you are upset, you are not going to be concentrating on the remarkably complex process of getting yourself into the air and back down again-in one piece that is.

As always, comments, questions and suggestions are welcome: jdlakin@mnallergyclinic.com