As the birds fly 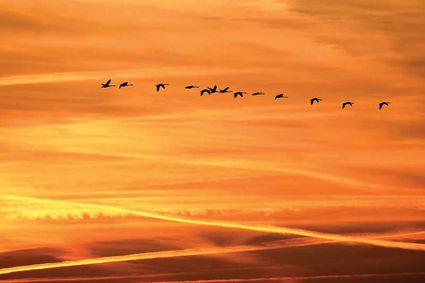 Of all the seasons experienced in the upper Midwest, fall is certainly one of the most visually spectacular, especially from the air. Great vistas of bright red, orange and golden hues can be seen as leaves turn colors while the trees prepare for winter. Only from above is it possible to truly see the carpet of varying colors and the many shimmering lakes throughout the landscape.

Even with all the delights for the visual senses, we must not forget to be alert for other aircraft in the air. We must also bear in mind that this is the time of year when we see many millions of birds beginning their migration south along the Mississippi Flyway and other flyways across the Nation.

The Mississippi flyway actually stretches from North Central Canada along the McKenzie River, through the Great Lakes, and along the Mississippi River, south to the Gulf of Mexico. It is an excellent choice for a migration route! This is because there are no mountains or high ridges along the bird's path and there are also excellent sources of food, water, and shelter over nearly the entire Flyway.

Keep in mind that migrating birds do fly day and night during migration season. Flight, an hour before dusk, or an hour after dawn, can be dangerous. These two segments of time generally reflect the highest bird activity as they arrive or depart at temporary roosting and feeding locations.

Most birds fly south along the Mississippi River, then cross the Gulf headed to more northern areas of Central and South America, though some go even farther. The basic answer to the question of why birds would do this is quite simply for the "warmth and logistics" They plan their route in part based on where they can find food, fresh water, and safe roosting places. As an example, Minnesota is a haven with more than 11,300 lakes of an acre in size or greater, many forested areas, plus a great amount of green, open space that provides good food and relatively safe resting spots.

Aviators should remember that migrating birds can and often will vary their altitude based on weather, winds aloft, and even terrain elevation. Though they (the birds) can fly higher, it is estimated that up to 90 percent of the bird strikes that occur will take place at or below 3,000 above ground level (AGL). Duck and goose strikes can occur as high as 7,000 AGL.

Aircraft can experience bird strikes anywhere and at essentially anytime during any season. Studies show however, that a majority of bird strikes (approximately 60%) occur during the July to October months, and in the descent, approach and landing phases of aircraft flight. But the greatest risk is at an altitude around or below 3,000 feet AGL, and either at, or within very close proximity to the airport, during the fall season. So when you fly, enjoy the beauty that surrounds you but keep a good watch on the sky, as the birds fly.*

*For additional facts and information go to: http://www.faa.gov/airports/airport_safety/wildlife/faq