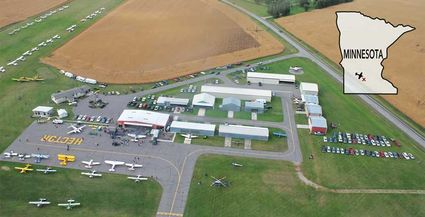 Hector, Minnesota is named after a legendary warrior from Greek mythology. Hector, a prince of Troy, figures prominently in the story of the siege precipitated by the famous love affair between Helen and Paris. First told by Homer in the Iliad, the story has been less skillfully portrayed in several movies. The most recent was "Troy"' where Hector was played by Eric Bana. The Minnesota City comes by the name indirectly. Many of the early settlers came from Hector, NY and brought the name with them.

Just as legendary, but in no way a myth, is the fly-in held at the Hector Municipal Airport. The first one was in 1940. Fourteen airplanes showed up, along with more than 200 automobiles, 600 breakfasts were served. That would be a great turn out for a fly-in in the 21st century, but since then the Hector event has averaged an incredible 150 aircraft. There's been as many as 192 aircraft and 1600 people.

Except for a couple years during World War II, the fly-in has been an annual event. The airport continued operations during the war, but a 24-hour armed guard was required. Aviation was so important to the town that the guards were all local volunteers.

After the events of 9/11, the 2001 breakfast was supposed to be a "drive-in", but there was much confusion that day about when US airspace would be open. One intrepid aviator did "fly-in", but had to hitch a ride home in a car.

People in Hector have been "air minded" for a long time. The Airport was established in 1925, which means it might be the oldest airport in Minnesota that's still at the original location. Back then there were three "flying fields" around town. The one on the south side was the favorite and is the site of the airport today. They picked the right spot. It's an easy walk to the downtown, and there's three places within a mile for your "$100 Hamburger."

The City museum is also downtown, and has a dedicated aviation exhibit. You're not required to walk; a courtesy car is available.

Originally called, "South Port", Hector had 4 runways until 1948 (no cross-wind issues for them). That year more land was acquired and the airport reconfigured as it is today. In 1949, it officially became the Hector Municipal Airport. The primary runway is 2800 feet long and was paved in 1966. The second runway remains turf. For long term rentals, the City built some "Tee" hangars in 2005. The Arrival/Departure Building was opened in 2008, with both meeting and flight planning areas. A new self-service fueling system was installed in 2017.

Hector claims to hold the record for the most "pilots per capita." State and Federal data supports that claim, but local enthusiasm for aviation goes way beyond the numbers. Hector's new water tower has an airplane painted on it, and there's one in the City's official logo. Light pole banners in town feature a little "taildragger", which is also appropriate since over 50% of the 30 aircraft based at Hector have "conventional" landing gear. 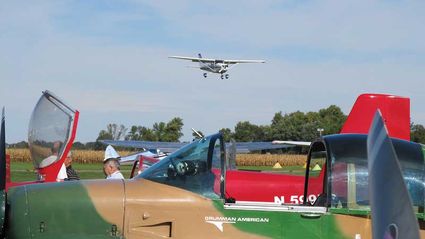 Like the Trojan Warrior, members of the Minnesota Aviation Hall of Fame are the stuff of legend. Four people from Hector are inductees, making the town a statistical "outlier" in that category also. Mary Jane and "Johnny" Rice grew up in Hector, then migrated to Willmar where they managed the airport for many years and sold Mooney Aircraft. Ken Butler is also from Hector, and was a founding member of the Minnesota "Flying Farmers." A longtime advocate for controlling development of tall towers in rural areas, Butler did most of his flying in Hutchinson where the airport is named after him. Hector's airport manager is also a Hall of Fame inductee.

Edgar (Ed) Newberg has managed the airport for 39 years, at the same time operating an agricultural application business. Ed's been in the aircraft sales business and is a member of the "Commemorative Air Force" squadron in Mesa, Arizona where he spends his winters. Ed is married to Connie who's Hector's aviation historian. Connie Newberg has compiled an amazing amount of data, and a lot of stories about aviation in Hector. She probably should be the City's fifth Hall of Famer.

The Hector "fly-in" is on the third Sunday of September. Breakfast is provided by the Lion's Club and the proceeds always benefit a charitable cause or person in need of assistance. This year will be the 75th time it's happened.