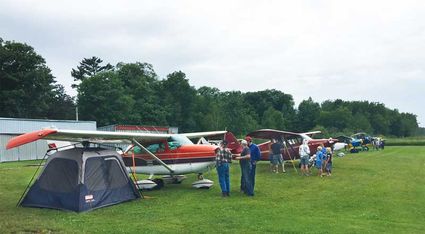 An impressive array of vintage aircraft draw attention from visitors of the July 9 Fly-In Breakfast during. The wing of a 1967 Cessna 172H protects its owner's tent. Next in line with visitors checking it out is a 1946 Stinson Voyager 108.

Isle Airport hosted a most pleasant July 8 evening of under wing camping, a movie, bonfire, popcorn, and beverages in a two-day fly-in event that coincided with Isle City Days in northwestern Minnesota.

"We had about 15 airplanes that came and camped," said Isle Airport Flying Club member Dave Retka. "We showed the Great Waldo Pepper movie. We had a nice evening."

The next morning, July 9, clouds filled the skies. Even though they let loose their watery content from time to time, local townsfolk and tourists were not dissuaded from visiting the airport. The parking lot was filled with vehicles of interested onlookers.

Children climbed in kiddie airplanes and a kiddie firetruck constructed by the Isle Airport Flying Club. Siblings or parents delighted the little ones by providing manpower mobilization. Attendees had a sneak peek at the kiddie rides during the previous day's activities in town.

"We had them in the parade last night, in a Flying Club Float," said Retka. "My brother and I are part of a Polka band. We were on a hay wagon playing some Polka music."

It is exactly these scenarios the Recreational Aviation Foundation (RAF) supports. The national organization was created to promote, preserve, and create air strips Kurt Pennuto, one of the events attendees has a duo role as a member of the Isle Flying Club and Minnesota State Liaison of RAF.

"RAF wants to promote pilots to use their planes to get out and recreate," said Pennuto. "If we start to lose our airstrips, if our airstrips close, that limits the amount of space and locations pilots can get to."

Early in its creation, the Isle Airport was open to the public. It is now a private airport. However, with all the resorts and other recreation related businesses in the area, several local entities are in conversations with the Isle Flying Club about the potential of returning the airport to a public status. The Flying Club currently maintains the airport grounds. They extend invitations to other pilots to visit the airport to enjoy its amenities.

"That's why I got involved," said Pennuto, "to do what I can through our organization to help this airport stay open and viable. It not only allows pilots to get to destinations to recreate but it also puts money into the community. Those are both win win situations for the aviation community."

Discussion about making the airport public sometimes face challenges due to a perception that community airports are a cost burden. Pennuto said that is not the case.

"I feel there is a separation of education, not only from pilots to the community, but also the community to pilots," said Pennuto. "When pilots land here, they will spend their money in town. They are using this airstrip to get someplace to recreate, just like I would trailer a boat someplace to recreate. I just happen to be using my airplane. I'll land here. I'll go into town. The Flying Club has some bikes available in the Pilot Shack I can ride into town, spend my money locally, or I can use a courtesy car to drive into town, stay overnight in a hotel, then be on my way."

According to the Minnesota Department of Transportation Aeronautics, community airports may qualify for state and federal funding to maintain and improve runways, grounds, buildings, and technological items like weather stations, lighting, and GPS systems. Pennuto said RAF works at state, federal, and local levels to keep airstrips open. He also makes an impact on a personal basis. 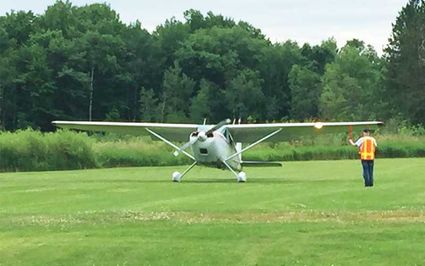 A member of the Isle Flying Club directs one of this 1953 Cessna 180 as it taxis into position for takeoff.

Though many community airports have paved runways, there are pilots who prefer grass strips.

"The plane I fly (a 1946 Stinson 108 Voyager 150) is a tail wheel so it handles much better on the grass," said Pennuto. "It was built when grass strips were more popular than paved. Also, I can get into more remote places with this plane. Grass strips are more forgiving."

"For a city to invest that way, they see the future," said Pennuto. "They are looking for growth in business. I get that."

Whether Isle Airport remains private and simply invites others to drop in for a visit to enjoy recreation in the area, or they embrace a public airport status, one thing remains clear. An airport is an asset to the community.