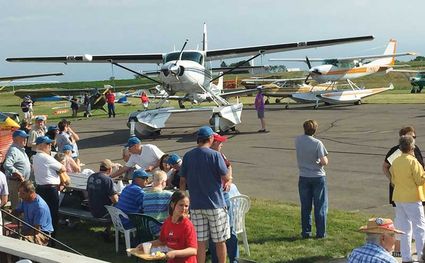 Family and friends joined a wide variety of aviation dignitaries, the mayor of Rushford, and local townsfolk at Rushford Municipal Airport, July 15, to dedicate the Robert W. Bunke Field in honor of the man who spearheaded the development of the airport which was designated in 1975.

Saturday morning, July 15, the skies around Rushford Municipal Airport looked a lot like MSP on a weekend. For at least two hours, planes were stacked up awaiting their turn to land. EAA Chapter 919 members displayed their expertise in directing 90 aircraft from the wild blue to parking spaces on the ground. The reason for all the hubbub? The official dedication of the Robert W. Bunke Field, complete with a Mustang, Corsair, and Avenger fly-by, courtesy of Wings of the North Museum at Flying Cloud Airport.

The Guest of Honor, Robert W. Bunke gave an overview of how Rushford Municipal Airport came to be, beginning with his approach to the city council in 1966 to propose the idea. Though he spearheaded the project, Bunke was quick to give credit to the support of people and organizations that added to the momentum over the course of the next several years, including the Minnesota Department of Transportation Aeronautics, the mayor, city council members, the local newspaper editor, and others.

Rushford Municipal Airport received its license (55Y) from MnDOT Aeronautics in 1975. Construction of a wooden T-hangar began in 1976, followed by installation of a fuel system and formation of the Rushford Area Flyers club in 1977. Over the course of the next 15 years an airport commission was formed, the apron, ramp, taxiway, and runway paved, and an FBO established.

When a slow period of waning interest occurred, the airport fell into a state of neglect. The community was put in a position to decide whether the facility should be closed. Bunke said while local residents Carl and Charla Miertschin were instrumental in getting the ball rolling, after due consideration by the mayor and city council it was decided to continue support of the airport. An airport commission was appointed. Mike and Barb Thern took action by establishing an FBO, Rushford Aviation on the airport grounds in 2000. Therns spearheaded the purchase of a double wide house which serves as an Arrival and Departure building. Improvements continue to this day. In his acceptance speech, Bunke extended thanks to everyone involved for their part in revitalizing the airport.

"What has been named here today is not just a few acres of land," said Bunke. "No. It's the culmination of a lot of hard work, a lot of planning, a lot of organization, and ultimately a lot of control that finally evolved into the Rushford Municipal Airport and literally put Rushford, Minnesota on the world map of aviation."

To emphasize how proud Rushford residents can be having established a municipal airport, Bunke related what happened the first time he called air traffic control to submit a flight plan out of Rushford.

"The ATC said, 'Where in the H is 55 Yankee?'" said Bunke. "I sternly came back, but jokingly, I said, sir, you have really stung my pride today. I want you, from this day forward, to burn into your memory that 55 Yankee is Rushford Municipal Airport at Rushford, Minnesota."

Regarding the naming of Robert W. Bunke Field, Bunke told the crowd about the years he used to fly into the Milwaukee airport.

Attendees broke into delighted smiles, laughter, and applause throughout Bunke's acceptance speech. Though the day's focus was the dedication of the Robert W. Bunke Field, the gracious recipient reflected on the efforts and support of others in making the airport a reality.

"I tell you this little history just to let you know how much this airport means to me," said Bunke. "When we dedicated this airport in 1977 I was sure that would be the climax of my interest in this whole project. Little did I realize that today would be the greatest day for me. I just have to thank you for that." 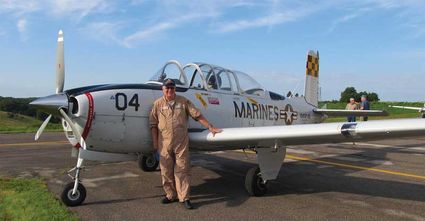 Stephen Bohlig flew in to the Rushford Airport dedication ceremony in a T-34 Mentor aircraft in tribute to Robert W. Bunke's service in the Marine Corps.

Bunke ended with a poem he authored, The Joy of Flight, describing his thoughts and feelings as a pilot on the many times he returned from a flight to see and line up with the white stripe in the middle of a runway. The last lines of the poem are as follows:

I see the field and once again the joy of flight must end. The tower clears me next to land so I answer quickly to their command.

On final approach with all things set I feel confident and safe as if the mighty arms of God have held us in His embrace.

The wheels touch down and I roll along the long white stripe on the black. I know for today that the flight is done but it's also good to be back.

I park the airplane and loosen the straps that have held me secure for so long. I look up to God in His home in the sky and I whisper, thank you Lord for letting me fly.