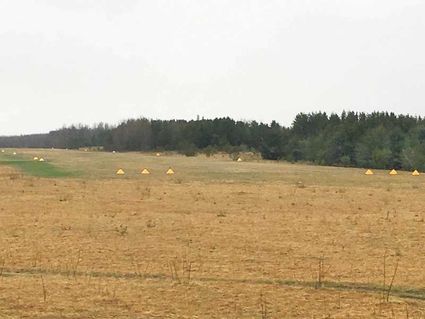 Backus Municipal Airport could easily be confused with an exotic wilderness retreat. The turf runway is 3,600 feet long and lighted. There are lots of tie downs.Hangar rentals are available for long term storage. A very nice log building has Arrival/Departure space, plus flight planning and a loft for meetings or quiet time. The building was constructed in 1996 and won the Project of the Year award from the Minnesota Council of Airports.

Within walking distance of the airport are places that serve a variety of tasty cuisine. You can also walk to a lake-side park. Resorts on the same lake offer overnight accommodations as well as boat rentals. Camping on the airport is encouraged. Feet are pretty much the only ground transportation, but with a little advanced planning you can hire a genuine 1868 Stage Coach for some local touring. The Stage Coach is appropriate since Jesse James once hid out near Backus. Maybe his ghost will stop the stage during your tour.

Edward Wellington Backus came to the Cass County area in the 1898. He did well in the lumber industry. The city was incorporated in 1902, using his name. In 1905, he moved to International Falls where he was instrumental in developing the hydro-electric dam that powered the paper industry there. After gaining a considerable fortune in Minnesota, he went to New York City and lost it all in the stock market crash. Maybe there's a moral in that story about how it's better to live in Minnesota.

Another reason Backus should have stayed is people in his namesake city really have a wonderful time. Since 1965, the volunteer fire department has hosted a fish fry every year in May. An event called "Old Timers" happens over Memorial Day weekend, and is kind of a homecoming for snow birds. The big community event is called Corn Fest, it features a dance, fireworks, lots of food, and a parade. Corn Fest is on the second Saturday in August. Not to be left out, Backus Airport has a fly-in every year on the last weekend of July. Backus is also a stop on the annual Grass is a Gas aerial poker run.

The Airport in Backus was started in 1930. A major user was a German organization that owned a nearby ranch. The ranch had a somewhat fortified compound. There's a rumor that Herman Goering once landed in Backus. During World War II, the US Government took the German connection seriously enough to assign guards with machine guns to protect the airport. After the War, a flight school and charter service replaced the Germans as the main user. Activity increased for several years, but the runway was too narrow for safe operations. In 1976, it was re-aligned and widened. That project required a lot transportation. One of the truckers hauling stuff was Denny Williams, who somehow got infected by the aviation bug. 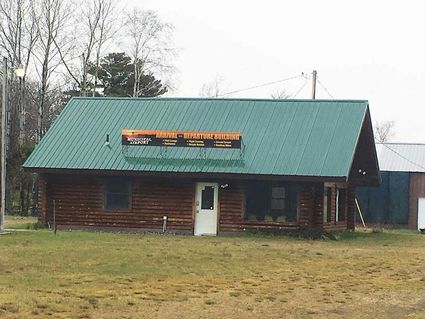 After working his way through the licenses and ratings systems to become an instructor, Mr. Williams proceeded to revive flight training in Backus. Wisely deciding a town of 250 people wasn't going to support much of a flight school, Denny got approval from the US Justice Department to train foreign nationals. From 1990 to 2012, there were usually seven or eight students from all over the world in Backus working on their commercial, instrument, and multi-engine training. It was a one year program. The students boarded in town. The school supplied bicycles for transportation. Two Cessna Skyhawks were the primary trainers. A Piper Seneca was used for multi-engine ratings. Initially the trainees came from many places, but eventually the school focused on training pilots from "the exotic sub-continent of India." Winter in Minnesota must have been an experience for them. Most of the trainees went on to commercial airline careers. So, of the 130,000 plus people that are pilots for the world's airlines, a very select group can claim to have learned their trade in Backus, Minnesota.

If fishing, resorts and stage coach tours aren't among the things you want to do, there's also golf, and a rodeo in the Backus area. Several specialty and craft shops are in town for your shopping pleasure. There are plenty of trails in the area for biking, hiking, ATVs and snowmobiles. You couldn't find more outdoor recreation at a big (and expensive) fly-in resort, so why not make the trip to Backus and get the same thing?

A shout out to reader Jim Luger for his suggestion of a location map in the Airport of the Month page. What a great idea! Thank you for your input, Jim.