When its time to practice what you preach 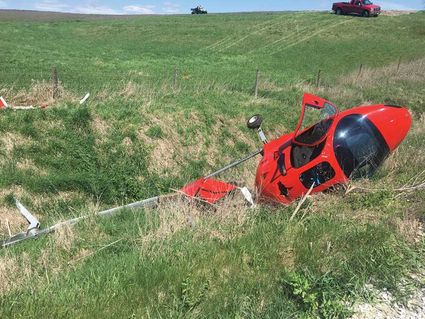 The Xenon gyroplane landed on its wheels, then flipped when the prop hit the ground.

As a Flight Instructor, I have covered emergency procedures ad nauseam. Follow maintenance procedures; make sure everything is documented and up to date. Do a thorough walk-around; file a flight plan; do a safety briefing and know how to use your seatbelts; fly the airplane first, know your V speeds; use a mental emergency checklist; find the best place to land into the wind. Aviate, navigate, communicate. Use a written emergency checklist if time permits. Crack the door(s) open prior to impact. Turn off engine/fuel asap. I'm here to tell you it works as advertised. It also happens quickly, so practice and prepare for the unexpected.

I was on a routine aerial photography mission with a professional photographer to get some aerial shots of nearby communities and landscapes. It was a clear day with light winds and light chop. The estimated route was about a two-hour loop, circling some nearby towns with airports, and a proposed landing at the airport of origin. We had four hours of fuel onboard. Since it was a local flight with several airports along the route, I opted not to file a flight plan. Even with the light chop, it was still a fairly enjoyable flight but it made photography a bit more challenging. Shooting required a bit more slow flight and circling over targets than expected. Still well within our two hours, we decided to take a break. We landed at one of the small airports en route.

Upon landing, there was a gorgeous Xenon gyroplane on the ramp that had just returned from a flight. I had met the owner previously, and for nearly a year had been trying to coordinate schedules for a quick 10-minute ride in the pattern. He offered and I declined. I needed to finish my mission and get back to pick up my daughter from school at 3:00. It was 1:00 p.m. We were about 30 miles from home base, a 15-minute flight or so. My photographer reassured me I had plenty of time for a Xenon flight if we just stayed in the pattern and returned in 10 minutes or so. Ok, let's go!

A quick walk-around and a safety briefing and we were on our way. The pilot made the radio call for takeoff, with the added disclaimer that it takes about 90 seconds for the rotor to get up to speed for departure. With a window in the floor, the nose, the door, and the ceiling, the visibility was fantastic. Blue skies and green spring fields made for a scenic departure.

At about one minute into the flight, we were about 500 feet. I heard a subtle change in sound. I couldn't tell what it was exactly, but it caught my attention enough that I transitioned from spectator filming the scenery with my iPhone, to flight instructor. The flaw in my plan was that I have never flown in a gyroplane before. It was NOT like a fixed wing airplane.

The pilot had no expectations of me as he was well aware of my passenger status. None-the-less, he was far more focused and busy that even a low-time pilot should be in good weather for a flight in the pattern.

"I think we're losing power," he said. He was going through a mental emergency checklist. I started weighing my options. A quick glance at the panel indicated I had not been paying attention to flight instruments at all and had no idea what V-speeds or RPM's were normal.

There was a field directly to our right, with a ditch and power lines directly in front of us and a road just past that, with a ravine with trees just on the other side of the road. I pointed out the field. The winds were light and variable, so that wasn't much of a factor. It appeared as though he was trying to put it down on the road, which was parallel to us. My concern was obstacles on either side.

"We should put it down in the field," I mentioned, "but watch out for those power lines."

"I'm trying" he said, calmly. He pushed the nose over slightly, which increased our descent. Then he started to turn towards the field. It became clear that we were not going to make the road or the field, and the power lines were fast approaching. At this point, I finally conceded we were going to crash.

My thoughts were on being able to pick up my daughter at three. Then I realized that my wife was at work and had no idea I was flying, or where I was, or that I may not be picking up my daughter at three...or that I might not be home again. I thought of all the appointments I had, and all the projects left undone. Then I thought about God and I knew He would provide. I knew the photographer would contact my wife. I knew someone would return the airplane I had flown back to home base. It would all be taken care of. It all transpired in a matter of a few seconds. I was unsure what would happen when we hit the power lines. Would we be shocked? Would it flip us upside down? Impact.

We came down through the power lines with enough force we literally couldn't tell we hit the wires. No jolt. No shock. If I had forgotten to crack the door open, it wouldn't have mattered in our case as we came down more or less on the wheels. We felt the rotor hit either the road or the fence and separate. We then rolled onto my side. The motor was still running. a I smelled fuel, then smoke. That was not a pleasing combination.

He shut down the engine and turned off the fuel. The pilot was hanging sideways from his seatbelt. I was not able to get out until he was out of the way. I helped hold him up and get out of his seatbelt so he could get his feet down on my door and stand up to exit up through his door. I quickly followed. Emergency crews arrived quickly. We were OK.

I was ill-prepared for what happened next. The police wanted a statement. The ambulance wanted a signature of refusal of care. We were going to have to notify the NTSB. Since my photographer is also well connected with the media, the story hit social media and the news almost before we hit the ground.

Literally, everything I said and did at that point mattered. How does one communicate to their spouse that they could have been killed, but weren't, so its OK? But I didn't have time to figure any of that out. I checked out with all the emergency services folks and hitched a ride back to the airport. I had to get the plane back to home base, pick up my van, and go get my daughter by three.

My photographer declined to fly back with me to get our vehicles, opting to have his wife come get him instead. I did a walk around, pre-flight, and headed back. I was not afraid to fly, but when I flew almost directly over the crash site about an eighth mile off the end of the runway, it was eerie and surreal to look down on where I had just been in a crash. I arrived without incident and parked the plane.

The FBO manager asked, "How was your flight?"

I thought, well, the flight in your aircraft was fine, but the other one didn't go so well. I was not prepared for the conversation saying that would require, so I just excused myself to go get my daughter.

The media called while I was driving home. They were going to meet me at my home for a statement. I picked up my daughter without incident. How do I explain to her what had happened? The media is going to be at my house at 5 o'clock when my wife gets home from work.

I texted, "The media wants to talk to me about something that happened today so they'll probably be here when you get home, but everything's fine." That should handle it, right?

She responded with a social media link about the crash, complete with pictures and a statement by my photographer about my near-death experience.

"Is this you?" She asked via text.

Um. Yeah, so we had plenty to talk about at dinner. Now I've become a bit of a local celebrity with everyone wanting to know more about the crash story. The mailman, my kids' coaches and teachers, even the gas station clerk.

It made me realize the importance of filing a flight plan, but also of having a friends and family communication strategy that can handle personal responsibilities in the event things don't end so well. It also taught me to spend a bit more time on emergency procedures on the ground and in the air, and on reporting requirements. How long do we have to report the accident to the FAA? What is required to be reported and what isn't? When can we leave the scene? What happens to the aircraft?

I can't provide all the answers here. However, feel free to contact me, or to do the research for yourself. One bit of advice I will offer though, if you're in a plane crash, don't text your spouse. Call. 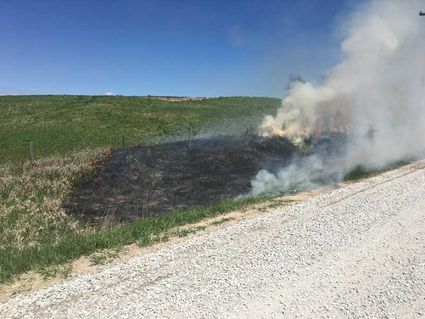 Smoke generated by spilled fuel in the aftermath of the Xenon gyroplane crash.

Also, it might be a good idea to have at least a working knowledge of an aviation attorney, and a set of expectations prior to needing one. You know, just in case.

Jeff is a Retired Veteran, Stay-at-Home-Dad, and Flight Instructor, having received his private pilot license more than 20 years ago. Jeff has authored the book, Open Air - How people like yourself are changing the aviation industry. It is an inspirational guide designed to give both pilots and anyone with an unaided interest in aviation a unique overview of the industry. Jeff would appreciate your help in promoting the book so that, together, we can make aviation great again. His website is http:www.OpenAirForEveryone.com Or join the Open Air Facebook Page at http:www.Facebook.com/AirForEveryone and on Twitter @Air4Everyone