Giving honor where honor is due

The Commemorative Air Force graciously provided its North American SNJ-6, one of the types of trainers Liz Strohfus flew during training missions.

Saturday, June 24, Faribault Airport officially commemorated the Liz Wall Strohfus Field. Pat Rice and Kathy Larson of the American Association of University Women presided over the ceremony, which opened with the Posting of the Colors by the Color Guard and Honor Guard. 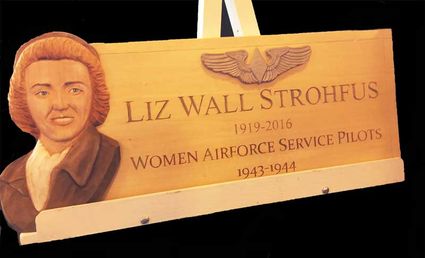 This plaque, carved by Ivan Whillock, was unveiled during the ceremony honoring Liz Strohfus.

A plaque carved and donated by renowned wood carver Ivan Whillock was unveiled, much to the delight of all. Outside, a 1959 North American SNJ-6 Trainer graced the tarmac, just one of the many aircraft Strohfus flew.

In an interview with the Minnesota Flyer, granddaughter Amy Strohfus said one of the most important impacts her grandmother had on the world was giving little girls an opportunity to believe in themselves and accomplish things that are not always readily available for women.

"I think the main thing about Grandma Liz is that she was physically such a small lady but nothing else about her was small. She had the biggest smile, the biggest heart, the most compassion for people and aviation I've ever seen."

True to the spirit of the day was an often quoted phrase, "Everybody loved Liz."