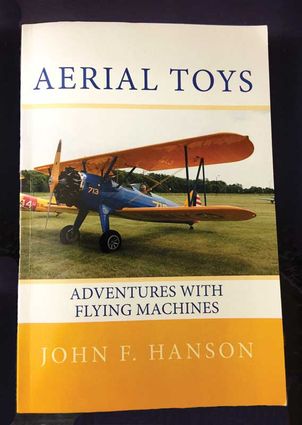 Aerial Toys Adventures with Flying Machines by John F. Hanson, self published, copyright 2017 is available on Amazon.com. There are three editions, deluxe in which most photos are in full color, an edition with color covers and inside black and white photos, and a Kindle version. For more information contact jfhanson@gmail.com.

When your first airplane is the one you made of clothespins right around the time you learned to walk; when your father is a commercial airline pilot; when your mother encourages you in your aviation adventures, you've got a better than fair chance of buying, building, and flying aircraft for the rest of your life.

John F. Hanson has a comfortable way of mixing boyhood dreams and experiential realities with human emotions and practical technicalities as he weaves stories of 21 aircraft purchases into a modest 162 page soft cover book, Aerial Toys - Adventures with Flying Machines.

There is just enough detail of specific engine operation and aircraft behavior to interest the true hands on aviator, yet, the brief chapters flow like mini short stories filled with the awe, wonder, and passion that motivates the boy (and later the man) to keep buying one airplane after the other, which makes the book a good read for non aviators as well.

The reader can imagine a young boy to excited to sleep because his airplane is tied down right outside his bedroom window. What is surprising as well as interesting is how the author can for such deep feelings for one aircraft as he devotes time to building, restoring, or simply flying a specific aircraft, then, one day, realize that experience has been fulfilled, then start looking for the next machine.

One of the more captivating elements of the book is the way Hanson ties in relationship with his parents, and later his wife, as he purchases one aircraft after another throughout the years. He also displays respect and admiration for others in his life from his pastor to his flight instructor, making the book not just about him, but about many of the people aviation brought into his life.

His honest portrayal of lessons learned when purchasing aircraft is worth the read itself. However, the humorous anecdotes, tender memories, and helpful tips stemming from real life experience in aviation make the book a valuable addition to any aviator's library.