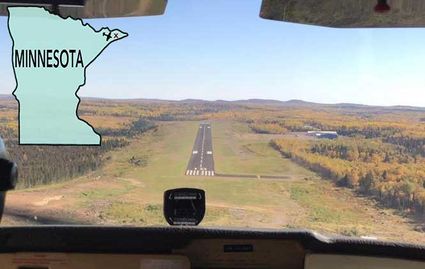 Cook County has only one City. It has three townships, eight "named communities," and a couple ghost towns, but only one incorporated City. If you only get one city, Grand Marais is the one to have. Once a commercial fishing port and logging center, Grand Marais is now the jumping off point for many wilderness adventures and a well know center for the arts.

Getting to Grand Marais is an adventure by itself. One way to get there is to drive, following Highway 61 along Lake Superior to the extreme northeast corner of Minnesota. This is arguably the most scenic road in Minnesota, but you could also see the North Shore by flying and get there a lot faster. That's why there is the Grand Marais-Cook County Airport. It's friendly to just about everything in General Aviation.

Completed in 2016, the 5000-foot-long runway can accommodate most jet and turbo-prop aircraft. An automated weather station (AWOS) is on the field. RNAV/GPS and NDB approaches are available for landing when the weather's less than good. There's plenty of parking space on the apron. There's heated hangar space to keep your airplane warm. The Arrival/Departure Building has meeting and flight planning facilities, plus a pilot's lounge. Both aviation gas and jet fuel are available. Ground transportation is either rental cars or taxi service. The Fixed Base Operator (FBO) offers full service aircraft maintenance, including float installation. It's less than a mile to the county's sea plane base, so you can land on floats and leave on wheels. To paraphrase a famous Minnesota author, "If they don't have it at Grand Marais you can probably get along without it."

The seaplane base is on Devils Track Lake, where there's also some good food and lodging. Cook County airport used to be located next to the seaplane base, but it had limited runway length and hangar space. The airport was moved to the current site in 1996, initially with a 4200 foot-long-runway.

The airport story in Grand Marais starts during the Great Depression. In 1933 construction began on the original airport, located where the High School is today. Funding came from the many federal employment programs of the era. For some reason work started in December. The project did generate some much-needed jobs. By January, 120 workers were on site. Airport construction had some of the same challenges then that it does now. By the time the first airplane arrived, the project was a year late and cost almost twice the original budget. US Army Captain A.W. Nelson made the first landing in his Douglas Monoplane in July 1936. He reported that more work was needed to bring it up to requirements. Sparingly used and accident prone, the original airport was abandoned after World War II in favor of the Devils Track location. 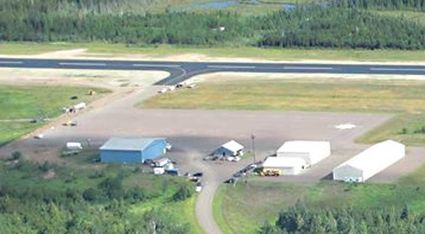 In 1941 Clarence Krotz was studying to be an aircraft mechanic in the other Cook County (the one in Illinois). He was supposed to finish on December 8, but skipped graduation. He was going to join the Army Air Corps and figured if he graduated they'd make him a mechanic instead of a pilot. Clarence got his wish. He flew Martin B-26 Marauders in North Africa and Italy. After the War he moved to Minnesota's Cook County and opened Sky Port Lodge at Devils Track Lake. Mr. Krotz also built the airport and seaplane base, which were licensed in 1947. Besides the operating the lodge, he did charters and flight instruction in a Piper J-3. It became a state airport, then was deeded to the county in the late 1960s. Eventually the airport was paved and lighted. Clarence Krotz managed the airport and operated the lodge until 1980. It was a family business His daughter Kathy (Finn) worked for her dad. She's a pilot, too, and now owns the J-3. It's based at the new airport, and still has floats and skis for year-round operations.

Continuing a tradition of interesting airport managers, the current one in Cook County is Rodney Roy (also the FBO). He's an expert in restoring old airplanes. Mr. Roy has restored several Gull Wing Stinsons, and a Cessna 195 that was a Grand Champion at the EAA convention in Oshkosh. Recognizing his talent, the EAA recruited Mr. Roy to be a judge of Vintage Aircraft in the Classic Division.

Their web site advertises "Life is bigger in Cook County." The Grand Maris-Cook County Airport is one very good reason why that's true.