Fast facts on thunderstorms and lightning 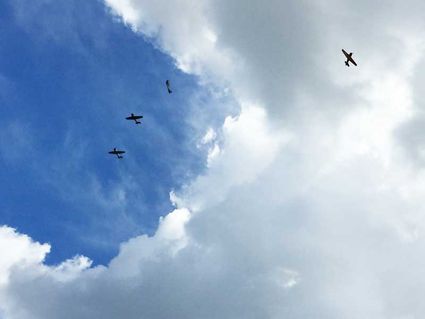 • Moisture to form clouds and rain.

Surface dew point and temperature are a good indicator of storm severity.

Thunderstorms forming over an area where the dew point is 50 F or higher with more than a 30 degree spread between temperature and dew point indicate a potential for extremely strong storms.

Thunderstorms are more likely to occur in the spring and summer months and during the afternoon and evening hours, but they can occur year-round and at all hours of the day or night.

A severe thunderstorm produces winds of at least 58 miles per hour or hail at least one inch in diameter.

Severe thunderstorms can produce tornadoes with little or no advance warning.

Thunderstorms affect small areas when compared to hurricanes and winter storms. The typical thunderstorm is 15 miles in diameter and lasts an average of 30 minutes.

Nearly 1,800 thunderstorms are happening at any moment around the world. That's 16 million a year!

Thunder and lightning can sometimes develop with a snowstorm!

There are two types of lightening produced by thunderstorms: lightning between a thunderstorm and ground are called cloud-to-ground (CG). Lightning within a thunderstorm is called intra-cloud (IC). There are roughly five to 10 times more IC than CG flashes.

The vertical extent of a CG lightning channel averages 3-4 miles with a maximum height of about 6 miles.

Lightning can strike horizontally, on average, 10 miles from the individual thunderstorm cloud, however it is not uncommon to see a lightning channel up to 15 miles from its source.

The electrical discharge travels upward at one-third the speed of light (62,000 miles per second).