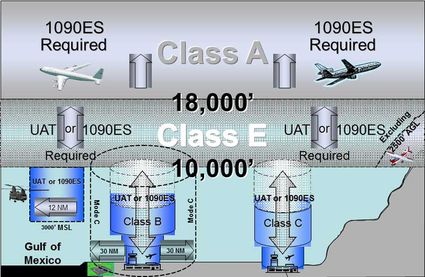 On January 1, 2020, the Federal Regulations 14 CFR§ 91.225 and 14 CFR § 91.227 go into effect, requiring any aircraft that flies in controlled airspace to have operating Automatic Dependent Surveillance – Broadcast (ADS-B) equipment on board.

What benefits does ADS-B provide? There are a number of primary benefits it brings to the table. The first one is that it reduces taxpayer costs involving air traffic infrastructure.

Arguably one of the best benefits for General Aviation (GA) pilots will be the capability of ADS-B to provide real-time traffic and aeronautical information in the cockpit.

The difference between ADS-B In and ADS-B Out

"ADS-B Out refers to an aircraft broadcasting its position and other information."

ADS-B In refers to an aircraft receiving the broadcasts and messages from the ground network such as the Traffic Information Service-Broadcast (TIS-B) and the Flight Information Service-Broadcast (FIS-B). ADS-B In is not mandated by the ADS-B Out rule. If an operator chooses to voluntarily equip an aircraft with ADS-B In avionics, a compatible display is also necessary to see the information. Refer to AC 20-165B for information on ADS-B OUT and AC 20-172B on ADS-B IN installation and certification."

These are free services transmitted automatically to aircraft equipped to receive ADS-B In. FIS-B provides a broad range of textual/graphical weather products and other flight information to the general aviation community. FIS-B is only available on the 978MHz Universal Access Transceiver (UAT) equipment. FIS-B includes the following:

TIS-B is an advisory-only service available to both 1090ES and UAT equipment users. TIS-B increases pilots' situational awareness by providing traffic information on all transponder-based aircraft within the vicinity of the ADS-B In equipped aircraft receiving the data."

As an added incentive for aircraft owners to get their plane equipped sooner rather than later with ADS-B equipment, the FAA is still offering a $500 rebate. In a news release date June 1, 2016, the FAA says, Aircraft owners of U.S.-registered, fixed wing single-engine piston aircraft with avionics that comply with FAA technical standard orders and meet the rule requirements could be eligible for the rebate.

The FAA is not offering rebates for software upgrades for aircraft already equipped, new aircraft, or aircraft for which the FAA already has paid or committed to upgrade.

The FAA will be able to distribute 20,000 rebates - one rebate per aircraft owner. The rebates are available on a first come, first-served basis until September 18, 2017, or until all 20,000 rebates are claimed, whichever comes first."

As of April 17, 2017, there were still 14,792 rebates available according to the FAA website. But that number may be changing daily. Check with the FAA for rebate availability.

Exception: In Alaska, Guam, Hawaii and Puerto Rico, flight of an Eligible Aircraft above 10,000 feet MSL and within FAA ADS-B coverage will qualify as meeting the airspace requirements for the Rebate program.

or: http:/www.faa.gov/nextgen/programs/adsb/faq/ for general information about ADS-B.

Additionally, you can find information at: http:/www.faa.gov/nextgen/update/