Outdoor weather has no impact on indoor learning 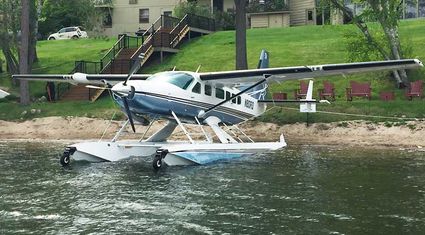 This 1986 Cessna turboprop is settled nicely on the edge of the beach of Madden's Resort on Gull Lake during the annual Minnesota Sea Plane Safety Seminar held May 19-21.

Inclement weather did nothing to dampen the spirits of those who gathered at Minnesota Sea Plane Association's Safety Seminar held May 19-21 at Madden's Resort in Gull Lake.

The beach was full of float planes. The land air strip had a fair number of aircraft, some with tents for an under wing camping adventure.

"I run a tight ship," said Guetter, a line which got a chuckle from an appreciative audience.

Though the favored touch and go competition was canceled due to weather, MSPA's Mark Schrier showed a National Geographic movie narrated by Harrison Ford, Living in the Age of Airplanes that was a hit with all attendees. 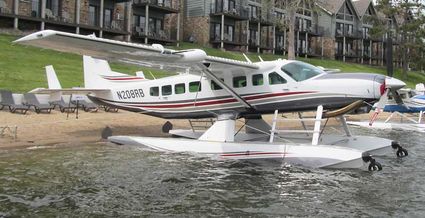 A 2013 Cessna with floats on wheels cuddles up to the beach front awaiting less wind and rain and more sun and fun to take passengers aloft. Saturday's inclement weather was not conducive to the Safety Seminar's touch and go competition.