Minnesota's Ten Most Significant Aviator Persons #8 in a series 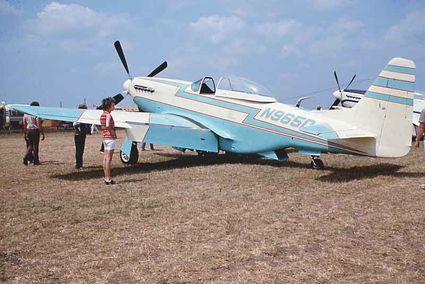 Photo courtesy of the Minnesota Aviation Hall of Fame

When I began this series of spotlights on Minnesota's top ten most important aviation persons, my intention was to feature the ten persons whose names had been foremost in the news and made the largest impact on the aviation community of Minnesota.

Charles P. Doyle, "Chuck" to everyone, was one of those people for whom the mold was broken after he came along. Born with a love for the sky, a daredevil's courage, and the need to make a buck in immediate post-Depression times, Chuck Doyle never sat still. What follows is a very condensed version of a life spent in the clouds.

In 1927, at age 11, Doyle accompanied his father to Minneapolis' Wold-Chamberlain Field, where the senior Doyle, a plumber by trade, was doing some work at the Navy hangar. To satisfy his young son's urging, he arranged a ride along in a Navy aircraft. Hooked, Doyle soon began riding his bicycle to the airport and doing odd jobs for the early FBOs just to be around airplanes. As a 16-year old, Doyle acquired a motorcycle and one day offered to trade the machine for flying lessons. By the end of the summer of 1932, Doyle had soloed, and two years later, thought it would be fun to buzz the football field where his high school team was playing its homecoming game. That act got him expelled and Doyle did not finish school. He did talk the local finance agency into loaning him money to purchase his own airplane, however, beginning a lifetime of aircraft ownership.

In 1935, on a dare, he made a parachute jump and finding it exhilarating, signed with Clarence Hinck, promoter of State Fair Thrill Shows, to take part in a group jump. In the next four years, he made a hundred or more jumps, and learned other daredevil stunts. Among his wild and crazy feats were ramp-jumping his motorcycle over cars, riding it through burning tunnels and fiery board walls, climbing from it on a rope ladder to an airplane flying overhead, riding it round and round in a barrel, riding an old car into head-on crashes, and dragging his body on the ground through burning oil behind a car. On one of his parachute jumps, he landed on the roof of a building at the airport, causing the owner to bill him $18 for damages. He went on the road in 1937 with the famous Thrill Show group, Bob Ward's Daredevil Aces, and crashed airplanes through ersatz houses hastily constructed at fairgrounds in the South.

If Doyle didn't have enough thrills, he learned skywriting and banner towing from local experts and fitted his own Travel Air aircraft with a smoke system and a banner tow hook, then took to the skies to give thrills to locals. Doyle would continue these activities until the 1980s, ironically advertising over Memorial Stadium during University of Minnesota football games.

With the beginning of the war, Doyle was hired by Northwest Airlines, and began an airline career as an instrument instructor at Rochester, Minnesota. In 1942, Northwest needed him as a flight crewman. Doyle began flying DC-3s and C-46s in Northwest's Northern Region, making military mandated flights in all kinds of weather through Canada, Alaska, and out to the far Aleutian Islands. With things back to normal after the war, Doyle became a Captain for Northwest and began domestic flights between cities. Having taken over his late father's plumbing business and gaining his Master Plumber's license, he was finally earning his own money both full-time and part-time. On a Northwest domestic flight, a woman passenger approached Doyle in the aisle of a DC-3 and recognized him as having unplugged her toilet the day before.

Doyle also saw an opportunity to purchase surplus military airplanes. He bought dozens, including Stearmans, Mustangs, Twin Beeches, and dozens of others, refurbishing some, restoring others, and selling them. Among his post-war purchases were three aircraft, now residing in the Air Force Museum; an A36 Mustang, a P-40E, and a very rare Sikorsky P-35. Doyle even raced a P-51D in a transcontinental race from Milwaukee to Reno, during which the plane's canopy blew off, denting his flight helmet, but leaving him uninjured.

Doyle also loved fast cars. He accumulated a collection of sports and racing cars. His love of driving fast was nipped in the bud by Northwest Airlines who gave him the ultimatum – drive or fly. Since the airline paid more, Doyle opted for the "safer" vocation – flying. He still managed to fly on his days off in Grand Forks as a spray pilot.

In the 1950s, Doyle became a partner in ownership of Southport Airport, home of general aviation pilots. He would go on to own hangars at several other airports besides moving his home to Apple Valley. There he built a 1,684 foot airstrip and a house on 147 acres, and erected a sign reading "Doyle International Airport – UFOs Welcome." 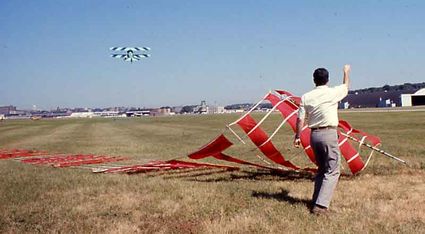 Photo courtesy of the Minnesota Aviation Hall of Fame

Doyle retired from the airline in 1976 at age 60 because it was required, but continued to skywrite, tow banners and rebuild aircraft. Part of Doyle International property was condemned in 1991 so the State could build a road to access the newly built Minnesota Zoo. Unfortunately, the road cut through the middle of Doyle's runway, rendering it useless. He decided to sell the rest of the property, dividing it between a church on one side and a school on the other. Doyle made a large donation to the church on the condition he be let into heaven. The minister couldn't promise anything, citing Doyle's reputation.

In 2002, Doyle received an equivalency high-school diploma from his old school, Washburn High. He enjoyed his retirement, donating his time and hangar facilities to his many friends and their projects.

His passing in 2008 left a big gap in the aviation community fabric because of his ties to the past and his many close friends. There will never be another Chuck Doyle!

Note: The above only scratches the surface. More on the life of this unique person can be found in Minnesota Aviation History 1857-1945 by Allard and Sandvick; Daredevil Doyle by Kenneth Hornby, 2006; and the article by Terry Love in the Fall 2004 issue of AAHS Journal (American Aviation Historical Society).