Looking for a home away from home 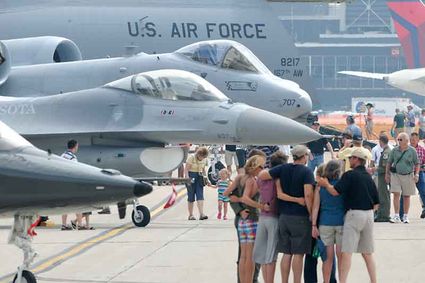 After accumulating aircraft and historically relevant aviation items for over 33 years, the Minnesota Air National Guard Museum finds itself in a tight spot, figuratively and literally.

"Since we've had a change in the security posture in the United States, it makes it ever more challenging to stay open to allow the public to come out and visit the museum," said Museum Executive Director Jim Atwell. "Visitors must call seven days in advance and have a military ID or valid driver's license and a current passport, or an enhanced driver's license. "

Since 1984, visitors have flocked to the museum located on the Minnesota Air National Guard Base at Minneapolis-St. Paul International Airport. The museum has been well utilized by school and other specialty groups. While educational tours have been its mainstay, the venue has also been used as a unique setting for birthday parties, weddings, anniversaries and other special events.

The museum commemorates the Minnesota Air National Guard, the first federally recognized air guard unit in the United States, founded by Minnesota's own Ray S Miller. The unit evolved over time to become the 133rd Tactical Airlift Wing out of Minneapolis-St. Paul, and the 148th Fighter Interceptor Wing out of Duluth.

Museum docent Stan Christianson said school children are particularly taken with the simulators which include an F-102A Convair "Delta Dagger" which was a Mach 1.25 fighter designed to serve as an all-weather interceptor, an F-4D fighter, and a C-130A "Hercules".

"They can sit in them and play with the controls," said Christianson. "They really like to play with the simulators. It helps them realize the complexity of these things."

"It gives students a first hand, hands on, touching, feeling, looking, smelling experience of what an aircraft is really like," said Jim Atwell. "It just gives them a little more breadth of experience about what it was like for people who worked on and flew those aircraft. The kids ask all kinds of questions. It's fun to see them, the sparkle in their eyes. It just gets them thinking, maybe I can fly one of those."

However, tightening security measures at the Minnesota Air National Guard Base are choking off opportunities for the public to use the museum, not only as a distinctive backdrop, but for even the most fundamental tour and history lesson. Although circumstances are challenging, members of the Minnesota Air National Guard Museum are rising to the occasion in a variety of ways.

"We are at a point where we're taking the museum off the military installation," said Atwell. "We now go out to the public, to air shows, to fairs, and to different public events. We have a gift shop and displays like our Photo Phantom, which is a cockpit of an F-4, fully instrumented just like it was when it flew originally. We allow the public to sit in that cockpit, ask questions about the aircraft, and have their photo taken."

Having displays and disseminating information at different events raises public awareness of the plight of the museum. In the past, funding has come from memberships, tours, events, and grants. 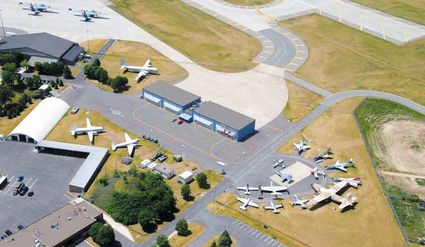 However, since security measures have hampered visitor to the military site, the ultimate goal is to move the museum in its entirety to a new location outside the gate of the military base, near Fort Snelling in a building designed especially for their aircraft.

"These assets need to be enclosed," said Atwell. "They can't deal with the Minnesota weather. The harshness of winter and heat of the summer takes a tremendous toll on these beautiful aircraft. Most of them are outdoors now. We do the best we can through the seasons to protect them with covers for the cockpits but they need to be indoors."

Taking museum displays out to public venues including air shows, schools, and even the Mall of America provides the general public with an opportunity to become involved. The volunteer based, non-profit organization welcomes new members with fresh ideas on how to accomplish the museum's funding goals and meet its challenges.

"We need to get to the point where we have the ability to develop more funding for the mission," said Atwell. "If someone's got a great idea we can move forward with, we're always open to innovative ideas on how to go about it."