David Retka's 1939 Taylorcraft comes in for a landing on the grass strip of the Isle Airport.

Back in the 1950s and 60s, sod airstrips dotted farmlands all over the country. One such entity, Isle Airport on Mille Lacs Lake in Isle, Minnesota was activated in July 1956.

While hangars and a Pilot Shack have been added, much of Isle Airport remains its quaint, nostalgic self. It was just that ambiance South St. Paul resident Dave Retka was looking for when seeking a place to hangar his 1939 Taylorcraft.

"It's fun being up here," said Retka. "It reminds me of when I was a very young kid. My brothers and I would accompany our dad to his little airport, similar to Isle, a grass strip with old T-hangars. It was near the Twin Cities. My dad and a group of his friends just bought a little bit of land, cleared it, mowed it, and called it the airport."

Construction of Isle Airport began in 1955. The land for the Airport was donated to the city of Isle by the state of Minnesota with the stipulation that it remain an airport. About 10 hangars were built early on. Multiple airplanes were based at the airport. A few of those original hangars still exist today.

In 1980, the city leased the airport property to the Isle flying Club, a public-nonprofit organization formed to preserve and maintain the grounds and its buildings. Maintenance and upkeep of the airport is accomplished solely by club member volunteers. Isle Airport was eventually assigned a private status, which it maintains to this day.

However, that status may change in the not-too-distant future, relatively speaking. In 2015, an airport commission was formed in Isle, which consequently worked with the Minnesota Department of Transportation (MnDOT) Aeronautics to bring the airport up to standards for public use. At present, MnDOT Aeronautics has funding available for qualified public use community airport improvement.

"We have been working to clear trees MnDOT has identified as being a hindrance to that whole process," said David Retka, treasurer of the Isle Flying Club. "Some of the trees are in a swampy area to the north of the strip, which is really hard to get at. We tried to go back there in the summer but between the bugs and our feet sinking into the muck, we decided winter was the best time to work on the trees."

Other challenges impeding progress include trees on the south end of the airstrip being on private land under the jurisdiction of a land owner reticent to see tree trimming or removal; finding volunteers to mow the airstrip as it takes an entire day due to the age and insufficient size of existing equipment; and inclement weather in 2016 forcing cancellation of fly-ins, a major fund raising source for the club.

Yet, in this community of 752 residents, the Isle Flying Club understands the wisdom of approaching the private to public status change with caution, patience, and persistence.

"It would be nice to have it be public," said Retka. "It would be great to have access to funds that might be available with a public status, but it's a long road to get to that point."

As they work towards a public designation, the club makes improvements that can be facilitated within their own membership, like purchasing a larger, more efficient mower; purchasing a courtesy car for visiting pilots; creating an underwing camping area; holding fly-in fund-raisers; and increasing awareness of what is already available for tourists at Isle Airport and the surrounding area.

Isle Flying Club member Patti Berger put list of Mille Lacs restaurants and resorts together, which is kept in the Pilot Shack at the airport for the convenience of visiting pilots. Appeldoorn's Sunset Bay Resort is one of the area businesses supporting a public designation for the airport.

"We think a public airport would add a lot of value to local businesses and our economy," said Appeldoorn's Director of Sales and Marketing, Tracy Gallait. "I've seen communities our size with very active airports and their economy is thriving. People who invest in business want to fly directly into the area they are considering. They don't want to drive, even 25 miles."

"Having more convenient access to our resorts, restaurants, and other businesses is a benefit," said Tramm. "A public airport provides that. Increased tourism would be advantageous to our entire community."

The Isle Flying Club is also seeking assistance and guidance from the Recreational Aviation Foundation (RAF). RAF is a Montana based non-profit whose mission is to preserve, maintain, and create airstrips for recreational access.

Under the private airport designation, air traffic at Isle Airport is limited to membership use. All others may use the airport on a permission only basis. Retka said the permission only policy is a good precaution.

"It is much safer to have pilots who have never been in Isle talk with someone familiar with flying in and out of that airport because it does have some unique characteristics. 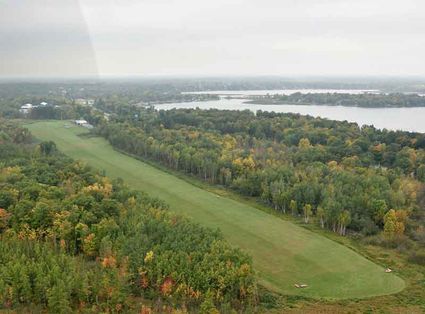 "The grass strip is approximately 2,500 feet long. We'd hate to have someone coming in here who is not prepared for trees and a short grass runway."

Visiting pilots are not without resources for repairs. Isle Flying Club president Greg Fradette is also an A&P and IA with a hangar on the field.

Interest in the Isle Flying Club is increasing. In the past two years, membership has grown from less than a dozen to over 60. Membership dues are a mere $20 a year.

While the ultimate goal is to attain public designation, Dave Retka said he will not be deterred from enjoying Isle Airport in its present status.

"There are just tons of things to explore around the lake," said Retka. "We want to turn Isle Airport into a destination for people who like to fly for the recreational aspect of flying, whether they want to do some overnight camping, or to just fly someplace for the day."