This is the seventh in a series of thumbnails of the ten most important Minnesota aviation persons, from the files of the Minnesota Aviation Hall of Fame. Previously we have learned about Clarence Hinck, Angelo "Shorty" De Ponti, Speed Holman, Ray Miller, Walter Bullock and Max Conrad. 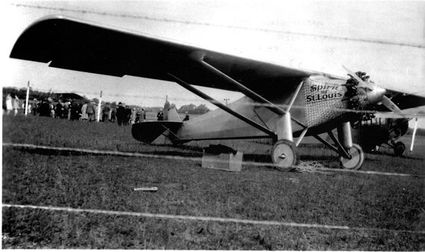 If you have heard the name Charles Lindbergh, you already know why he is so well known. His May 20-21, 1927 solo flight, ninety years ago this May, from New York to Paris is perhaps the single most significant flight ever made. There is little more that needs be told that isn't readily available in a thousand books and newspapers.

What may be interesting to note is exactly how he is related to Minnesota, other than having been raised in Little Falls. Lindbergh was actually born in Michigan where his mother traveled in order to have her mother nearby to help. She brought Charles back to Minnesota soon after he was born. Most of our readers know and have visited the fine museum located next to his boyhood home at Little Falls. However, what else about his life makes him one of us?

After Lindbergh's incredible flight, he received literally thousands of requests for personal appearances, interviews, dinners, and speeches. Lindbergh needed a manager. The Guggenheim Foundation of New York met with Lindbergh and agreed to fund a nationwide tour with pre-established stops in every state of the union.

It made sense to Lindbergh, who, previous to his flight to Paris was an airmail pilot, that an organized tour with published stops and rest periods would promote a cause dear to him - the need for establishing commercial aviation. Lindbergh's future Father-in-Law, Dwight Morrow, the US Ambassador to France agreed the tour would give Lindbergh something to do "to save him from the wolves."

The tour was planned for some 82 stops, at least one in every State. The loving masses could see Lindbergh and his flying machine, the Spirit of St. Louis. Along the way, Lindbergh would fly low and salute a vast number of other cities. For the cities where he didn't stop, he would drop bundles of souvenir pamphlets.

The tour would run for three months, from July 20, 1927 through October 23. Two of the 82 stops would be in Minnesota. Thus, on August 23, Lindbergh came from Madison, Wisconsin. After fly-bys at Winona and Red Wing dropping leaflets, he flew over the St. Paul Airport where he was scheduled to make a speech at a formal dinner that evening. He then turned and soon touched down at Minneapolis' Wold-Chamberlain Field. The script had him touching down at mid-field, taxiing to the Air Guard hangars for overnighting the Spirit under guard from souvenir hunters. However, crowds broke police barriers and charged onto the airfield, obliging Lindbergh to make a hasty turn to the Airmail Hangar in midfield. There, many of the field's workers and officials hastily closed the doors before the airplane was torn apart!

The clamor at Wold delayed Lindbergh's start for St. Paul in a motorcade. When he got underway, his driver blew along at a higher rate of speed than what allowed the crowds lining the roadways to catch the long glimpse of the hero they had expected.

"Why the Parade Speed" headlined the Minneapolis Journal. Lindbergh got to St. Paul in time to freshen up and attend a formal dinner at the St. Paul Hotel. He enjoyed the dinner and the overnight stay, then spent the following day in St. Paul, meeting with his mother and other relatives for a few hours.

Up early the morning of the August 25, Lindbergh was in the air again after breakfast to fly over Savage, Shakopee, St. Cloud, Melrose and Sauk Centre with the usual pamphlet drops. He then glided in to land at Little Falls, his former home, where he was honored in a parade. At dinner that night, he gave a speech about the importance of commercial aviation. Lindbergh departed before noon on August 26 for his next stop at Fargo, North Dakota.

Much earlier in his flying career, Charles Lindbergh had flown his father on a political campaign tour in Central Minnesota. Charles Sr. was stumping for election as a State Senator in 1923. The two Lindberghs agreed that flying in to a stop by air might wow the crowds into voting for him.

It didn't work. Lindbergh Jr. cracked up the airplane at Glencoe, ending the plan. Sr. Lindbergh lost the election.

In 1928, Lindbergh made a stop at St. Paul's Airport to meet with James J. Hill, Louis Hill and Frank Budd, officials of the Great Northern Railway, who were interested in starting an airline to supplement their railroad.

When leaving the meeting, an old friend of Lindbergh's offered him a ride in a new Mohawk Pinto airplane. Lindbergh obliged, but made a single trip around the patch, commented that it was a nice airplane, then quickly flew out of the airport to go on to other business.

The Lindbergh Jenny he cracked up in Glencoe was sold as scrap. It languished for many years in a barn in Iowa. George Dade, wealthy businessman and President of the Long Island (NY) Early Fliers Club was looking for a Jenny to restore. He bought the parts and pieces in 1973. With the help of many friends, he rebuilt the airplane.

In 1982, the Jenny was borrowed from the Cradle of Aviation Museum in Long Island, New York and brought to the Twin Cities where it was hung with appropriate ceremony in the atrium of the Northwestern Bank Building in downtown Minneapolis. Most all of you know what happened next.

On Thanksgiving evening that year, a fire broke out in the bank building that was enough to force the bank to close it's doors, tear down the building and rebuild what today is the Wells Fargo Bank Tower. The eerie thing is that no flames ever touched the Lindbergh Jenny! In fact, it was subsequently hung for a year in the ticketing concourse of the Lindbergh Terminal at MSP.

A lasting tribute to Charles Lindbergh can be seen as a statue on the mall in front of the State Capitol in St. Paul. The Paul Granlund bronze statue represents Lindbergh, the Boy and the Man. Check it out this summer, the ninetieth anniversary of his solo flight to Paris.