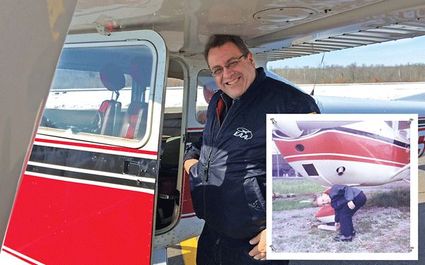 It's a rare man who owns and flies his grandmother's favorite airplane. Michael J. Grzincich fits perfectly into that category. In 2012 he purchased the 1964 Cessna 172F once owned by his grandfather. He's been sharing his flying experience in the aircraft ever since.

For years, Michael J. Grzincich kept a photograph his mother gave him of his four-year-old self sitting in the cockpit of his grandfather's 1964 Cessna 172F.

"I remember seeing that plane," said Grzincich. "I remember the flight when I thought the wheel pants were pontoons. When Grandpa flew over Lake Superior, I asked him if we could land on the water. He said no."

Now all grown up, the boy who was raised in Hibbing, Minnesota also remembers his grandmother's affinity to that specific airplane.

"I remember being at the airport a number of times seeing different aircraft," said Grzincich. "My grandparents lived out of town so they'd come to visit from time to time in an airplane. This particular one was grandma's favorite because she could see out of it. She was not a tall person."

Aviation experiences with his grandparents solidified a deep-seated desire in the young boy to fly.

"Forget a driver's license," said Grzincich. "I wanted a pilot's license. I've always wanted to fly. As soon as I was able, I started taking lessons. I would bum rides through the youth group at the church, or anything I could do to try to get a ride to the airport."

Through the years, the Cessna changed hands. When little Grzincich grew up, attended college for a short time. Then he "took a quarter off" to pursue a career in radio, business as a mobile DJ, and to build an Information Technology company. He got married, had three kids, returned to college for a degree in IT, and landed a position as an instructor at Anoka- Ramsey Community College where he's been "for the better part of nine years."

After contemplating the image of himself in the Cessna, which he kept beside his computer for years, he began an earnest search for the aircraft.

"Grandma used to have an orange hat with the tail number written across the front with a Sharpie," said Grzincich, "so I always knew the number. When the Internet hit, I was able to track it down."

Though Grzincich got his pilot license in the 1980s, as life intervened, flying was set aside, awaiting the right moment to surface once again. However, aviation was always pumping through his veins. He kept tabs on the Cessna's movements for nearly 10 years.

"I got back into flying when our third kid got to be about 10," said Grzincich.

Then, five years previous to purchasing the Cessna, Grzincich maintained communication with a gentleman in Michigan who owned it. In 2012, the moment arrived.

"When it came time," said Grzincich, "his wife wanted a cabin. I wanted an airplane. We worked it out."

Grzincich said his own wife gave him a condition on the purchase.

"She said, 'If you buy it, you better fly it,'" said Grzincich. "I saw no downside to that. So, with my family's blessing, I bought the plane."

"People think that aircraft are hundreds of thousands of dollars," said Grzincich, "and they can be, but you can buy a reliable aircraft for a pretty decent used car price."

Operating and maintenance also carries a fee, all doable with proper planning.

"I burn fewer than eight gallons an hour," said Grzincich. "Fuel in my area of the state is about $4 a gallon. It's about $35 an hour with oil to fly the plane. Of course, there are fixed costs, the plane, the hangar, the annual maintenance, repairs, but that's not too bad.

Grzincich throws himself into aviation with vigor. His activities include a bit of aerobatic training, a stint as a CAP Deputy Commander for Cadets from the North Hennepin Squadron, a FLYMN Silver-Level participant, a volunteer Young Eagles pilot (where he flew 104 kids in 2016), an Eagle Flight mentor pilot, member of AOPA, member of the Minnesota Pilots Association, and a Cambridge Municipal Airport Advisory Board member (KCBG). He is now the Young Eagles Flight Coordinator at EAA Chapter 237 based at Anoka County Blaine Airport. He has a Facebook page encouraging Young Eagle Flights.

"The greatest opportunity in flying is sharing the experience," said Grzincich, a self-professed aviation evangelist.

"Start enjoying the sky because it's such a perspective changer. When you fly, you'll understand. Just the view is worth it. So many kids have only seen the world through the backseat of a minivan. When you get them above the tree line, it's a whole different world."

"When people spend all of their time looking down into their hand-held devices, it truly diminishes their employability because they don't develop interpersonal skills such as a firm handshake and good eye contact," said Grzincich. "Flying helps people engage with a community of real people and communicate efficiently and accurately. These soft skills add qualities to many other aspects of life, including the job world. 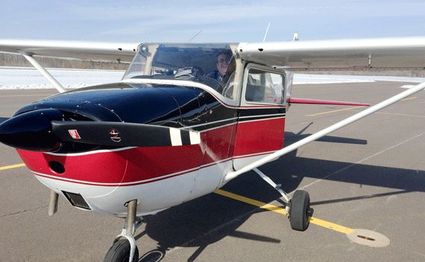 "Aviation really does add to critical thinking. It puts a little more emphasis on math, too. I've got two hours to fly. I burn eight gallons an hour. I've got four gallons of gas. Am I going to make it?"

"A young pilot is a better driver in their car because they pay more attention because of their skills in an airplane. They are more situationally aware."

When that kind of passion for flight is graced with connecting historically with the aircraft you own, aviation becomes particularly meaningful.

"In this airplane, I've had the opportunity to fly a couple of my cousins, both of my uncles, and my mother in a plane that was their father's," said Grzincich, "and that is really cool."