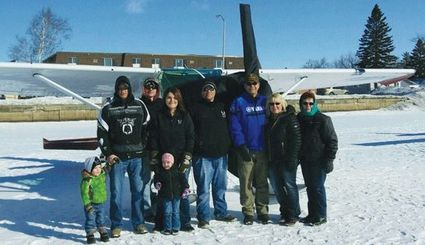 Kids: Blake Buchner, Hailey Buchner Adults:Nolan Buchner, Kody Klamar, Steph Buchner, Shawn Klamar, Brent Klamar, Laurie Klamar, Mildred Klamar. Aviation is a family tradition for the Klamar's. Laurie points out that, not only is Brent a pilot but his dad and uncles were pilots and his two sons are pilots.

Warroad Lions Club held their 39th Annual Fly-In Breakfast in February, bringing in a wide variety of aircraft from around the regions. Landings were on the Warroad River. God weather, fantastic aircraft, and a delicious breakfast made for a great Fly-In!

Rick Mercil of Rick's Aviation Adventures was all smiles, as were many attendees in their picturesque surroundings. Mercil, a Certified Flight Instructor for almost 40 years, with 10,000 flight hours, flew his 1956 Cessna 180 from Sunset Lodge with Jim Younggren's 1951 Piper Super Cub, and Ronny Davidson 1949 de Havilland Beaver, for an oh-so-perfect flight of three.

Mercil's passenger for the day, Kevin Jefferies, a photographer friend took full advantage of the photo op, which may cause Hayden, Mercil's 8-year-old son (and usual passenger) to take up photography to assure himself a seat for next year's event.

Jim Younggren and his Oshkosh Lindy Award winning 1951 Piper Super Cub PA18 with the 160-horse engine cut fine figures as it landed on the Warroad River, after which the fellow airmen made their way up to the American Legion Club to warm up with a great breakfast, hot coffee, and much camaraderie topped with aviation based conversation.

Some attendees come to look, to dream, to remember looking at all those Little Golden Books about aviation they looked at with such interest as children. Such a visitor to the Warroad Fly-In Breakfast was Minnesota resident, Jason Anderson who gazed at all the awe-inspiring sights. As happens to inspired visitors, Anderson began to speak with some of the pilots about how he might obtain a pilots license. Go for it Jason!

Sunset Lodge owner, Ronny Davidson purchased his 1949 de Havilland Beaver, serial number 49, a year and a half ago. It was a hit at the Fly-In. Davidson said he's had a lot of fun with the aircraft, that he has floats for it, and he finds it to be a very good airplane. His commented that his flight into Warroad was beautiful and the day couldn't be any nicer. 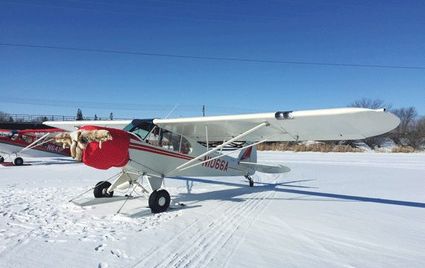 Father and son team Harvey and Luke Penner flew in from Steinbeck, Manitoba., each in their own aircraft. The Penner's have two flight schools in the Winnipeg area. They split a fleet of 35 aircraft ranging from two-seat Cessnas to 172s, taildraggers, and twin-engine airplanes. Luke said they have students from around the globe from places including South Korea, China, Western Europe like France, and of course Canadians and Americans. Luke also flies aerobatics which he said is a bit of a creative passion as well as a self-expressive art form.  He participates in aerobatic competitions. The Penner's flight schools have seen an up-tick in students in the past few years. Luke said last year was one of their busiest years in recent memory which he, said is indicative of the shift in the world economy in the last few years.

Proving the event was family friendly, the Buchner and Klamar families attended en masse. Laurie Klamar said aviation is a family tradition for the Klamar's. Brent, a couple of uncles, and two sons are pilots, as was his father.

The event was so successful, Warroad is already looking forward to their 40th Annual Fly-In next winter. It's worth putting on your calendar.