A departing or landing aircraft can experience a condition called hydroplaning when there is moisture on the runway. The moisture can be rain, slush, ice, snow or a combination of moisture types in a thin layer on the runway surface.

Simply stated, hydroplaning is an event that occurs when the brakes are applied on landing for example, and the wheels lock, causing the tires to skid on top of the moisture surface, somewhat like water skiing.

When taking off, the wheel and tire will initially roll through the moisture, pushing it aside as it moves along slowly. But, as forward velocity increases, the pressure between the tire footprint and the runway increases. At a certain speed, hydrodynamic lift occurs. The aircraft is now hydroplaning as the tire rides up on the top surface of the water on the runway.

An added danger is presented when landing on a wet or water covered surface in a crosswind. The side force induced by the crosswind can cause loss of control due to hydroplaning and the resultant force vector. This can result in an unplanned excursion off the side of the runway.

Viscous hydroplaning occurs when the aircraft tires roll up on top of the film of water on the runway surface. It is possible for this to occur at considerately lower speeds than dynamic hydroplaning, however conditions require a smooth or smooth acting surface. 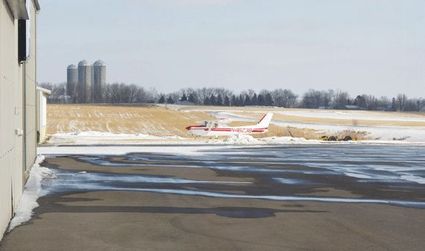 Dynamic hydroplaning takes place when 1/10th of an inch or more of water is standing on the runway. It takes place as pressure builds in front of the tires and lifts them from the runway. They are then supported on the surface of the water.

Reverted rubber can occur when there is a prolonged wheel skid. Steam is generated between the tire and the runway surface by the friction of the tire footprint on the surface. The steam quickly softens the rubber of the tire, making it tacky and sticky. In addition, it can generate enough pressure to lift the tires off the runway surface.

So when you fly in spring, or any time of the year, pay attention to the moisture on the surface of the taxiway and runway in particular. Be sure you know what you are dealing with before you move your aircraft, or before you land on a moisture covered surface.