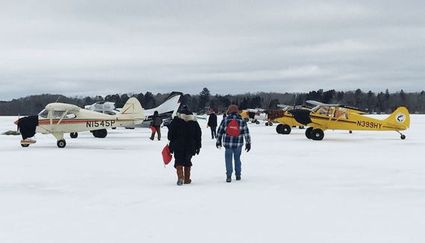 Winter is not an inhibiting factor for the Jackson Ski Plane Fly-In. It's the draw! Twentyfive aircraft made their way to McGregor to park on the ice, take the brief stroll up to the semi-heated hanger, and eat hearty, homemade chili, thoughtfully provided by Kathy Schwister of TrickAir, sponsor of the event.

Apparently Paul Jackson just can't get enough of aviation. He is a Captain at Southwest Airlines based at Chicago Midway, the proud owner of a Cessna 180H awaiting a ferry flight from Olympia, Washington to Minnesota, is co-host and pilot for The Flightline, an aviation magazine T.V. show, and recently held his Second Annual Ski Plane Fly-In at his private sea plane base on Horseshoe Lake in McGregor, Minnesota.

Among those attending was Steve Schwister, owner of TrickAir who not only sponsored and co-hosted the event, but provided Kathy, his wife's delicious homemade chili. Flying Magazine sent Executive Editor/writer Pia Bergqvist, and photographer Jim Koepnick to capture images and share the story with their readers. Around 35 aviation related companies sent gifts for door prizes at the Fly-In.

The first plane arrived around 11:00 a.m. on a windy January 28 day, beginning a steady stream of air traffic expertly guided to orderly parking spaces by a group of enthusiastic volunteers. 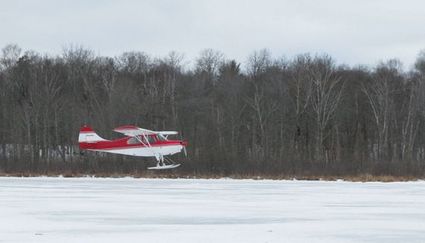 A 1960 Champ 7GCB Citabria makes a smooth landing on a windy January winter day to attend the Second Annual Jackson Ski-Plane Fly-In in at Paul Jackson's Ski Plane Base in McGregor. This year's event was sponsored by TrickAir. Jackson welcomes everybody!

The event was officially an invitation-only gathering due to the private status of the base. However, Jackson has a standing invitation to a wide audience. A couple years ago Jackson purchased the property that had once been a sea plane base but had lost its designation.

"I just stopped in here and it was for sale," said Jackson. "I've owned a couple different sea planes over the years. I'm a big believer that we've got to keep this going. I thought, since nobody's opening any seaplane bases, we'll open one up."

Last year, Jackson and Kristi, his wife obtained an official seaplane base designation for the property. They also refurbished the original, rustic log cabin on its shoreline.

"I call it the wayward home for seaplane pilots," said Jackson. "It's for use in emergencies. If someone on floats is coming by and they run out of daylight or face bad weather, they are welcome to land here. We are MN61 in the summer. We monitor 122.90 and can take calls at 612-963-1655 to use the base."

Look for more good things to come at Jackson Seaplane Base as it grows into its future.