This is my 322nd unique type of aircraft flown. As mentioned previously, there is no set standard for "aircraft flown"-it's up to the individual as to how he/she counts them. My criteria is that I must make a takeoff or landing-no "holding the controls in cruise." By making a takeoff or landing, I get to experience the ground handling, the acceleration/deceleration, the effect of the controls over differing airspeeds, the rate of climb or descent, and the glide. I don't automatically count a "suffix" model-only those with significant changes-powerplants, for example. This is part two of a two-part article on the Zenith. 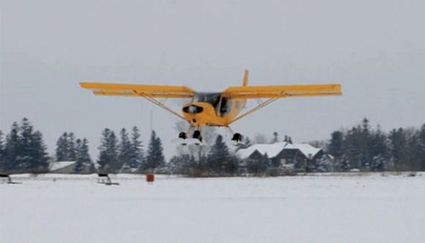 The Zenith 750 comes in for a landing in snowy conditions.

On the day that I flew the Zenith. The winds were directly across our main runway, gusting to 17. I own a Kitfox LSA, and I wondered what the ground handling would be like. I need not have worried-the nosewheel is steerable, and there was no wing-rocking like you would find in a Cessna 150 in those winds. There was nothing different about the runup, and in short order, we were ready to fly. Kirk suggested minimal flaps for this first takeoff in a crosswind-like my Kitfox or any airplane equipped with drooping ailerons, the aileron effectiveness is diminished with flap or flaperon extension. I needn't have worried-there was plenty of control. I added power, and simultaneously hauled back on the center-mounted stick (I flew from the right side)-by the time we got the power in, the nose wheel was off the ground, and a second or two later, so were we. It took all of about 200 feet, and we could have halved that had we been pointed into the wind or used takeoff flaps. The airplane climbed steeply at nearly 1000 feet per minute. Leveling off for some 4-way GPS groundspeed runs, I found the cruise to be about 90 knots (100 mph)-though higher cruise speeds are available. (If you value cruise speed at the expense of some STOL capability, Zenith has an airplane for that as well-the Cruzer. It eliminates the leading edge slats, has a different tail, smaller wheels, and speed fairings-adding 18 mph to the cruise speed).

In doing a short aircraft evaluation, I usually do steep turns, slow flight, and configuration changes. Flying the aircraft at different speeds gives a chance to evaluate control effectiveness and harmony, as well as to expose different handling characteristics (like pitch changes and the need for trim). I usually don't do stalls-but for a STOL airplane that lives on the edge of a stall, those are important. The Zenith handled well during all maneuvers. I was impressed by the outside visibility and the space inside the cockpit. All too soon, it was time to return to Albert Lea for the crosswind landing. With Kirk's coaching, I applied partial flaps and did a partial-power approach-wary of the turbulence to be found at the normal touchdown point-downwind of trees. The Zenith tracked straight and true, and I was rewarded with a good landing. Despite not making it a STOL approach due to the wind and turbulence, we used up only about 500 feet. Unlike some light airplanes, this airplane is very capable in the wind. 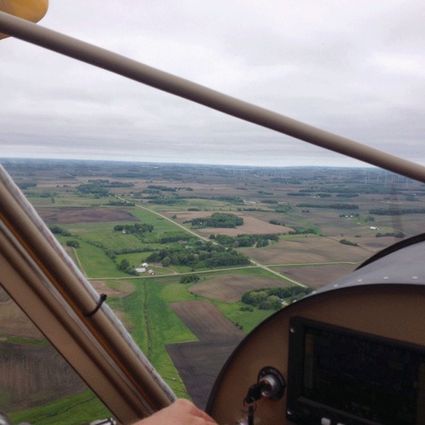 Plenty of viewing room from the cockpit of the Zenith make for some extremely enjoyable flights in all seasons.

Here's my takeaway on the Zenith 750. I would consider the Super Cub and the Cessna 150 with 150 horsepower as prime competitors-both fine planes, and it speaks well for the Zenith that it is in such good company. The Zenith 750 offers the STOL capability of a Super Cub-without the crosswind problems. It has far more baggage area than a Super Cub or 150. It is easier to fly in a crosswind than a Cessna 150. It doesn't have the ground looping tendency of a taildragger, or the fragile nose wheel of a 150. It offers "land almost anywhere" capability. It has a cruise speed of a Cessna 150/150 or Super Cub, despite the lower installed horsepower. The cockpit visibility is better than almost any other fixed-wing airplane I've flown. With 115 horsepower, it has the fuel economy of a regular Cessna 150. It can be operated on floats or skis. Yes, you'll have as much invested in building one as you would have in a Cessna Super 150 or Super Cub-but you have more room than either, more baggage space, and better economy than either of those models equipped with a 150 horsepower engine. This airplane will appeal to a pilot who wants a "fly almost anywhere" airplane that you can operate in the wind-in comfort. Unlike the comparable Super Cub and Cessna 150, this aircraft can be certified as Light Sport-and unlike factory-produced Light Sport airplanes, you'll have about half the investment in those airplanes.

It has been said that "All airplanes are compromises." With the Zenith 750, I would characterize it as "This airplane is not compromised, it is optimized" for its mission."

Jim Hanson is the long-time operator at the Albert Lea, MN. Airport. Jim has been flying for over 52 years, and though he has flown hundreds of types of airplanes, he likes almost all of them—but some more than others. Jim particularly likes “working” airplanes—airplanes that are flown a lot—not hangar queens.” If you have an interesting airplane that Jim may not have flown, check with him at his airport office at 507-373- 0608 or jimhanson@deskmedia.com