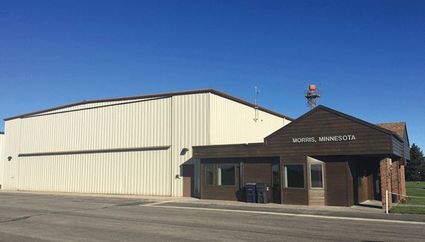 Morris Arrival and Departure building is nestled next to the large hangar.

"Morris is where agriculture and culture come together." That's how the City advertises itself, and it's very true. If you fly to Morris, the agricultural connection will be obvious. Some of the world's best farm land surrounds the Morris Municipal Airport.

Morris has an airport with the "right stuff." That includes a 4,000-foot-long primary runway and a 2,600-foot-long turf "cross wind" runway.

The main runway is paved, lighted, and features all the modern visual aids (REILs and PAPI). A VOR is on the field and broadcasts the weather information. Plus Morris has the usual RNAV/GPS approaches.

There's also a nice Arrival/Departure Building, self-service fueling, and hangar space (both heated and un-heated). A courtesy car is available, or the local taxi service can get you where you need to go.

Morris is home to 20 aircraft, including several dedicated to agricultural flying. To complete the farming connection, the airport is named after Charlie Schmidt. Mr. Schmidt was a lifelong resident of Morris and a founder of the Minnesota "Flying Farmers." For many years, he was the local aerial applicator. In his spare time, he did flight instructing.

Culture is not as apparent at the airport, but there's still plenty of it around town. Morris has a reputation for Jazz, hosting several festivals each year. There's also the Prairie Renaissance Center, Stevens County Historical Society Museum, and the nicely restored Morris Theater.

"Prairie Pioneer Days" is the City's annual festival. It's on the second weekend in July. Music, food, and a parade are featured.

Morris is on the Pomme de Terre River, which in turn gives its name to a Park and Golf Course. There's a network of trails too. "Pomme de Terre" literally means "earth apple," but is usually translated as potato. Early French explorers saw the local Dakota harvesting what they thought were potatoes along the river. It was turnips the natives were eating, but the name stuck. Today there's plenty of good restaurants in Morris, featuring a variety of food besides potatoes or turnips.

Known originally for agriculture, the University of Minnesota campus in Morris is also a cultural center. Forget any big school image you have. U of M at Morris is a small school that offers high quality education at public school costs. The school has consistently ranked among the top 10 public liberal arts colleges. Besides agriculture, majors ranging from anthropology to theater are offered.

During World War II it was the "West Central School of Agriculture," hosted a Civilian Pilot Training (CPT) program at the then new Morris Airport. The Airport had just opened in 1940.

That's where Morris native Bennie Hill learned to fly. In 1944 he was piloting a B-24 "Liberator" that was shot down. Lt. Hill was the only survivor. Luckily, he came home from the war to raise a family that includes retired army Lt. Col. Blaine Hill who today manages the City of Morris, including the airport.

Dick Grace also grew up in Morris and had a rather interesting career in aviation. He learned to fly in World War I, then did stunt flying for Hollywood in the 1920s and 30s. He had a reputation for "crashing" airplanes in the movies, but he was far from reckless. Mr. Grace had a very good working knowledge of physics, and took a scientific approach to stunt flying. He wrote several papers and articles on the subject. Grace is one of the few combat pilots from both World Wars. He flew B-17s in his "second war." After World War II he "retired" to operate a charter airline in South America.

The Morris Airport is also a good illustration of the connection between a community's economic success and access to aviation. "Superior Industries" is a leader in engineering and manufacturing equipment for handling bulk materials. Their headquarters is in Morris. They base three corporate aircraft there.

The business connection provides plenty of incentive to improve the airport. The City has a multi-million-dollar expansion in the works.

Speaking of engineers, the City is named after Charles F. Morris. Mr. Morris was a leader in railroad construction. Born in Ireland, he eventually became chief engineer for the Manitoba and Northern Pacific Railroad.

Besides agriculture and culture, business and education are also elements that might take you to Morris. Or maybe you could just go flying and to see a great airport out on the prairie.