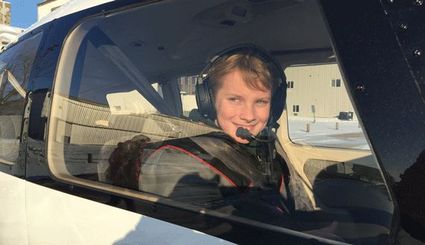 Jacob Gibbs, 11 is displaying the First-Airplane-Ride smile from the cockpit of pilot Paul Campolbasso's Beechcraft Soundowner.

Controlled excitement just oozes out of EAA Chapter 237 members, based at Anoka County Blaine Airport. Reasons are many and varied. For some, it's Super Saturdays.

The second Saturday of every month, all year long, the EAA Chapter is serving breakfast, offering Young Eagle Flights, and in engaging IMC Club gatherings.

IMC Clubs are based on the premise that pilots can benefit by sharing experiential knowledge.

"I call it organized hangar talk," said EAA Chapter 237 IMC Coordinator Curt Stoltz. " We show a video scenario of a situation someone actually encountered. It's like the movies. They build you up to a peak, then let you go. Then, they don't show you anything more.

"Then we ask, 'What would you do?' Scenario Based Decision Making, as the FAA calls it. So, we show the scenario, then, as pilots, we sit and talk. Hopefully we learn from each other."

Stoltz said since the FAA recognizes IMC Clubs as valid pilot related education, the EAA Chapter is in the process of getting Wings credit for participation.

Campobasso began his aviation adventures nearly 18 years ago as a glider pilot. Six years ago he added an airplane pilots license so he could tow gliders. Prior to the Young Eagle Flight, the pilot engaged in a short lesson about aircraft parts, functions, and what to expect during the flight.

Most commonly, Young Eagle Flights are offered in summer months. Why does Campobasso fly in the winter?

"It's the only way to stay proficient," said the experienced pilot. "If you don't like flying simulators all that much, and if you live in Minnesota, this is what you do."

Young Eagle's Coordinator for EAA Chapter 237, Michael Grzincich was also on hand with his 1964 Cessna 172, which he bases at Cambridge.

"This is the first year we've done Young Eagle Flights all year round as a chapter," said Grzincich. "We're getting the word out that we're doing it every second Saturday. It's not just Young Eagle Flights. We've got the Fly-In/Drive-In Breakfast here with some pretty phenomenal food."

Flying year round has its challenges. However, this is one pilot who is not daunted by cold weather.

"It's January but it's above zero," said Grzincich. "It's fine. Besides, we're from Minnesota. It's a good time. We flew some kids last month at just a little below zero and it was absolutely fine.

"The skies are smooth in the wintertime, very little convection, nice winds, beautiful days. There are heaters in these little planes. They're not the best heaters but they are heaters."

Benefits of the day go beyond delicious sausage and eggs, IMC Club, and airplane rides. EAA National donates a $5 voucher to local chapters per child flown in the Young Eagle Flights. EAA Chapter 237 puts those funds towards a scholarship to Air Academy at Oshkosh.

"The more kids we fly, the more we can give back," said Grzincich.

The Young Eagle Coordinator is self professed aviation evangelist. Aviation even works its way into his job as a faculty member at Anoka-Ramsey Community College where he teaches IT. He commonly discusses growing career opportunities in aviation with his students. However, he also introduces the idea of general aviation. In doing so, he finds he must address one of its fundamental mythical roadblocks.

"They all think airplanes are hundreds of thousands or millions of dollars," said Grzincich. "I tell them you can buy a solid running 172 for the price of a good, used, 4-wheel drive pickup truck. If you don't have cable, you can pay for a hangar. If you don't go to the movies all the time, you can afford to fly for an hour. So, there are ways to justify and set your priorities so we can get younger people flying."

Grzincich actively introduces young people to the airport, stating that there is a need to infuse community airports with youth.

"I have an AARP card and I'm one of the youngest guys who hangs out here," said Grzincich. "It would be really nice to see some people who are too young to rent a car show up at the airport."

The teacher hangars his aircraft just one mile from the college. He takes advantage of that location as often as possible.

"On a nice day, I often bring my student's flying because I go anyway and what's one more?" said Grzincich. "It's wonderful to share the experience of flight. We need more pilots. We need more mechanics. There just aren't enough." 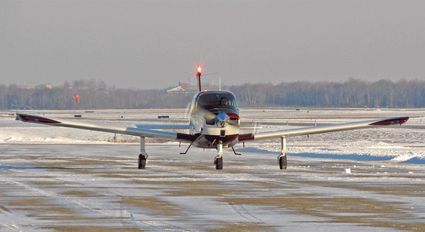 Pilot Paul Campobasso, with North Star Flyer's is taxiing his Beechcraft Sundowner at Anoka County Blane Airport. This experienced pilot flies in winter months because, "It's the only way to stay proficient. If you don't like flying simulators all that much, and if you live in Minnesota, this is what you do."

"I'm not a pilot," said Louden. "I've loved aviation since I was a kid. I just can't get away from airplanes."

The Oakdale resident is currently building a late model Japanese WWII airplane. When he learned about EAA, he joined.

"This EAA movement that's on now is the greatest thing that's ever happened to me," said Louden. "It's changed my life, actually.

"You can never tell what you're going to find when you come to the airport. Since I got into EAA I've been privileged to meet a lot of nice people.

"I tell everybody coming here, this is like going to church. Everybody's friendly. You never hear a swear word. Everybody is caring about everybody else. They are wonderful people."

Whether that is true about all EAA Chapters, Louden may not know. However, he knows it is absolutely true about EAA Chapter 237 based at Anoka County Blaine Airport where Saturdays are indeed, Super.