This is my 322nd unique type of aircraft flown. As mentioned previously, there is no set standard for "aircraft flown"-it's up to the individual as to how he/she counts them. My criteria is that I must make a takeoff or landing-no "holding the controls in cruise." By making a takeoff or landing, I get to experience the ground handling, the acceleration/deceleration, the effect of the controls over differing airspeeds, the rate of climb or descent, and the glide. I don't automatically count a "suffix" model-only those with significant changes-powerplants, for example.

The fully capable Zenith 750 making a solid landing in snowy conditions on skis.

The airplane is owned and was built by Jim and Kirk Hiner, of Kenyon, Minnesota. See the sidebar about the Hiners-it is an inspiring story about a father-son relationship-and their shared love of building and flying airplanes together.

It features a unique wing set above the cabin (the better to make more room in the cabin for the pilot and passenger) and to give unrestricted views out the side of the aircraft without ducking your head to look out.

Placing a skylight in the overhead wing means that a pilot can look into the direction of a turn with as little as 15 degrees of bank. Maximizing the view outside also was a consideration for the bulged cabin doors and bubble windows-and the design of the front windshield and cowling.

The result is almost helicopter-like views outside. With the fixed leading-edge wing slats, the stall speed is a low 35 statute mph (and that is actual speed, not indicated). Many STOL airplanes have similar stall speeds, but the negative of having slow stall speeds is that taildraggers are always sitting at a high angle of attack, making them difficult to take off, land, or taxi in high winds.

Zenith elected to go with tricycle landing gear, and to make the elevator so powerful that the nose gear is raised the minute power is applied. The result-an airplane that can easily be taxied or landed in wind, while retaining rough-field operating capability.

Zenith made the fuselage upswept to keep it clear of damage when operating off-airport-and included large tires all the way around for the same reason. Back at the tail, the horizontal stabilizer features a pronounced negative camber to keep the nose off the ground.

There isn't a vertical stabilizer-but there IS a full-flying rudder for excellent slow-speed capability. On the wing, full-span flaperons provide roll control and lift at very slow speeds.

The cabin has very large doors to make entry easy, and a huge baggage compartment. The seats are fully adjustable, and the cabin is wide. There is a centrally mounted control stick, with grips for both pilots. There is more than enough room for my 6'4 frame-anybody smaller will find it commodious.

When you think about all of these design issues-it's hard to think of why the airplane would be designed any other way!

The airplane can be built with folding wings, if desired-but the tail spans 8'5". Most (but not all) states will allow motor homes up to 8'6"-so that isn't much of a problem.

You can also build the smaller 701-I have a friend in Canada that loves his-but at my size, it gets a little cozy if carrying a passenger. If you need 4 seats and STOL, you can build the 801. Engine choices abound-including Rotax, Jabiru, Corvair, UL aircraft engines, and the Continental O-200 and Lycoming O-235. Hiner's airplane has the Lycoming.

Instrument panels can be "steam gauges, I-pads, or "glass". The design gross weight is 1440 pounds, giving a useful load of about 650 pounds-but you can certify it at 1320# to stay within the LSA category.

The second installment of Jim Hanson's Zenith CH 750 article will appear in the March issue of the Minnesota Flyer.

Jim Hiner joined the Army Air Corps in 1943, flying missions as a pilot on a B-24 named "Princess Pat"-then finishing his 25 missions in "Pied Piper." After the war, he flew that aircraft back to the U.S.-loaded with troops and equipment. He kept flying after the war, eventually owning half of a Beech Debonair. He later became half-owner of a Fairchild PT-19 open-cockpit WW II trainer, which he and his partner restored.

His son Kirk began flight training in Faribault in 1976. After earning his Private Pilot certificate, Jim and Kirk purchased a Beech Bonanza, and Kirk built time for his Commercial, Instrument, CFI, Multi-Engine, and Seaplane ratings. Desiring to have the simplicity of a fixed-gear airplane with good short-field performance, he pair traded the Bonanza for a Cessna 182, but it wasn't long before they wanted to explore fixed-gear airplanes that were faster, had good short-field capabilities, and were even more economical-so they turned to homebuilding. Their first project was a Zenith CH 300. Completing the aircraft, they turned to manufacturing a set of Zenith amphibious floats for it-and anyone who has built a float-equipped aircraft will tell you that manufacturing floats (especially amphibious floats) is as big a project as building the aircraft itself.

While they enjoyed flying together, the pair also found that they enjoyed working together building aircraft. As Kirk put it-"we try to get together for a couple of hours every night-and on the weekend if we have the time-but we keep after it." Homebuilding has become a way of life with the Hiner family-they have attended every Oshkosh convention since it moved back to Oshkosh-that's 45 consecutive years!

With a short-field airplane in the hangar, they looked for a fast and economical airplane to build, and the next kit was a Van's RV-6A. After completing that airplane, they purchased a Murphy Rebel Kit, and after completing the Rebel, installed the previously-built amphibious floats on it-and sold the CH-300. They now had an amphibious STOL floatplane, and a cross-country cruiser, but both had only two seats. Reluctant to sell either airplane, they purchased a Van's RV-10 kit-a 4-seat airplane with fixed gear that delivers Bonanza speeds, and after completing the RV-10, they sold the RV-6. Their stable of aircraft met all of their needs-but they found that they still enjoyed building aircraft-so they purchased a Zenith 750 kit-finishing it two years later. They now had an amphibious floatplane (they leave the Rebel on floats year-around) and a fast cross-country cruiser (RV-10), and a STOL airplane (Zenith)they could take anywhere. Just to cover all of the bases for winter operation, hey fabricated a set of wheel-penetration skis for the Zenith. 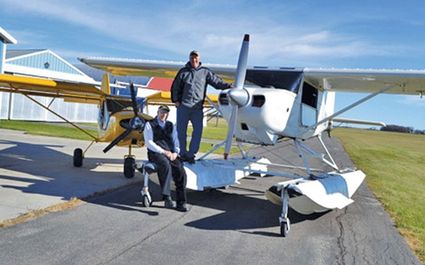 Jim Hiner, 93 and Kirk, his son settle comfortably on the Rebel floatplane with the Zenith CH 750 behind them. The two of them have built six airplanes.

Kirk continues to fly each of the airplanes-a LOT. Kirk owns a cabin on the Northwest Angle on Lake of the Woods. He flies the IFR-equipped RV-10 to Warroad, then takes the float-equipped Rebel out to the cabin on the Angle. He will do the same in the winter with the Zenith 750-utilizing the wheel-skis.

Jim is 92 now-but the Hiners would like to continue to build airplanes together. They haven't made up their mind yet, but since they have built two Van's products, an RV-12 Light Sport is high on their list. Their relationship is one that is little-seen in families today-a father and son working together on projects of common interest-people who enjoy each other's company so much that they can't wait to get out to the workshop together each evening-and to continue to fly the aircraft they produced for years afterward. Their relationship is to be admired, and this story is as much about the Hiners as it is about their airplanes. I know of only a few aviation stories like this that compare-and that's the reason I wanted to share their story with readers.