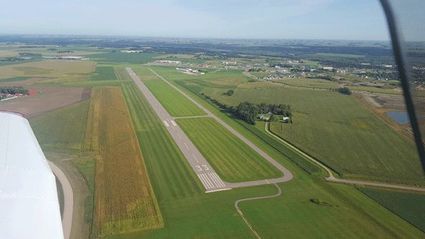 A Roman Legion consisted of about 5,000 disciplined and well trained soldiers. Two thousand years ago there were 30 legions in the Roman army, and they usually won their battles.

Then, the Romans ran into a guy named Herman. In 9 AD, three Roman Legions were defeated in the Battle of Teutoburg Forest by a group known as the Cheruscans.

Herman was the Cheruscan leader. He effectively kept the Roman Empire from expanding into a big part of what is now Germany. He is a national hero in Germany.

A statue of Herman stands atop a monument in New Ulm, Minnesota. The monument was dedicated in 1897. The columns, cupola and statue are over 100 feet tall. Herman is 32 feet from his toes to the tip of his sword. It's the third largest statue in the US. So why is an ancient German warrior such a big deal in a Minnesota town, and what does any of this have to do with Airports?

New Ulm was founded by German immigrants. The folks who live there still take great pride in the town's Teutonic heritage. The statue and monument, known locally as "Herman the German," is one of the town's many highlights. There is also a 45-foot free-standing clock tower with a "Glockenspiel."

Of course, there's beer. The August Schell Brewery has been producing beverages in New Ulm since 1860. It offers guided tours, complete with samples. For aviators, the New Ulm Municipal Airport is an attraction all by itself.

In the best tradition of German engineering, New Ulm's airport is perfectly planned and meticulously constructed to serve the needs of General Aviation. At 5,400 feet, and providing all the lights and visual aids you could ask for, the main runway accommodates jets and turboprops.

In 1944 the City moved the airport to its current site. The facility has since been expanded incrementally to meet the needs of local aviation. The most recent project, extending the runway to its current length, was completed in 2015. New Ulm received the FAA/Governor's award for project planning and development for that project.(There's that German engineering again).

Ray Johnson, one of Minnesota's premier aviators once called New Ulm home, so it's appropriate that the place have a first class airport.

Ray was born in New Ulm. He learned to fly there. Ray is best known as an agricultural pilot, but he also did charter flying and flight training.

In the 1960s, he started "Tracy Flying Service." Later, the business branched out to Marshall, where his company now operates as Midwest Aviation. New Ulm Flight Service (NUFS) is a subsidiary of Midwest Aviation, so, in a sense, Ray's come home.

Dan Soehren is the Director of Maintenance for NUFS. He also manages the airport. He's been there for 47 years, so long he remembers the 1970's when "Air New Ulm" had scheduled service to Minneapolis and St. Paul using Piper Navajos and Beech Queen Aires. 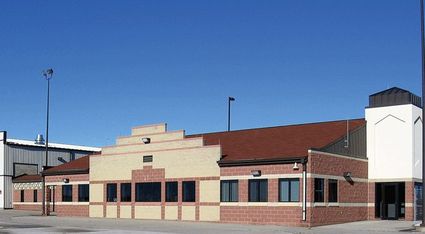 A classy Arrival Departure building adds to the welcoming atmosphere at the New Ulm Municipal Airport.

The Chamber of Commerce web site says, "Germans have more fun." They certainly have fun in New Ulm, and so does everyone who visits or lives there. There's October Fest, of course; plus Bock Fest"and Bavarian Blast. The annual St. Patrick's Day parade keeps things inclusive. The Airport hosts a fly-in on the first Sunday after Labor Day. There's more. No fewer than 60 events are listed on the Chamber web site.

Maybe events aren't your thing, or you're in New Ulm on business. Stay around and see the sights. There's some good restaurants that include Hispanic and Italian (not just German) cuisine. New Ulm also has some nice parks. The old airport site is now a Golf Course and County Club. Two traditional hotels, plus a couple nice bed and breakfast places are in town. You can do the brewery tour and fly home the next day. There's camping on the airport if you want to sleep with your airplane. Do Germans really have more fun? A trip to New Ulm might be the easiest way to find out.