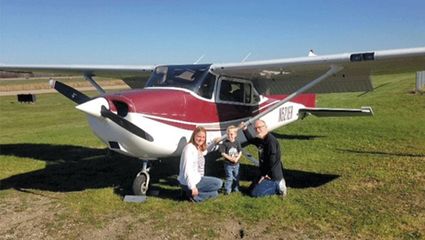 Jordan Sundeen, Cash Sundeen, and Grandpa Tom Benson (aka "Papa") pause for a moment prior to Cash's first flight in the Cessna 172SP from Twin Cities Aviation at Anoka County Blain Airport.

Since attending his first air show at two-and-a-half years old, our grandson Cash has been fascinated with airplanes and flying. To satisfy his curiosity, and possibly plant the seed for a lifetime of discovery and excitement, Carla, my wife and I arranged for Cash, now four years old, to take his first "flight lesson."

On November 6, 2016 Cash, Jordan (his mother, who is also my daughter) and I went to Twin Cities Aviation based at Anoka County Blaine Airport. When we arrived, we were escorted into a hangar where planes were being worked on. Others were all shiny and ready to go. Cash thought that was awesome! He even reminded me that I "better not touch."

It was a perfect, cloudless, low wind day. Our pilot, James Bauer came in and introduced himself. He took Cash around the plane for the pre-flight check. Cash learned about the flashing lights, got to move wing flaps up and down, check the tires, windshield, propellers, and more. He really enjoyed that.

More excitement for Cash came with being lifted into the pilot seat, getting strapped in, and having the headset put on. He said he thought talking through the headset was pretty awesome. Cash even took his mom and me (whom he calls Papa) along for the ride.

Prior to the day of the flight, we had prepared the yard at our house with a big parachute draped over our trampoline. We also put a homemade sign on the roof of the garage that said HI CASH in big giant letters.

During the flight, the pilot circled our house three times. Cash saw Grandma Carla jumping on the trampoline, waving a towel. His Uncle Jericho was also waving a towel for him to see. Cash said he couldn't believe how tiny Uncle and Mama, and everything else looked.

After circling the house, we flew over Osceola and Stillwater. During that part of the flight, Cash was allowed to work the controls, another thrill! Finally, it was time to head back to the airport.

On the return trip, Cash got a little airsick, but what a trooper! After landing and getting out of the plane, he said, "Next time I'm not eating hash browns before we fly."

We were so impressed that he wasn't deterred from flying. He just figured out what he had to do to fly again. 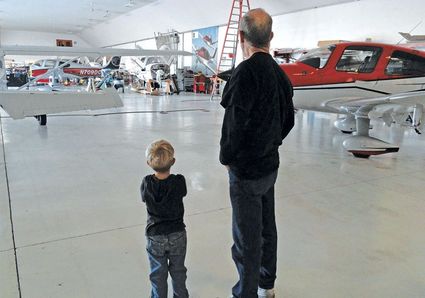 Cash and "Papa" Tom Benson take in the sights in the hangar at Twin Cities Aviation before the flight.

We were also delighted when Cash said, "Flying over Mama and Papa's house was the coolest part of the flight!"

All in all, it was a great experience, not only for Cash, but for his Mama and Papa, too.

Now every time a plane flies over he looks up and asks us, "Is that our plane?"

We look forward to seeing what aviation adventures Cash will have next.

Thanks to Tom and Carla Benson for this inspirational article about their grandson Cash Sundeen's first flight.

The Minnesota Flyer welcomes first person narratives about supporting hopes and dreams in the field of aviation, no matter the age of the dreamer.

The Minnesota Flyer reserves the right to edit and publish in accordance with the standards of this publication.