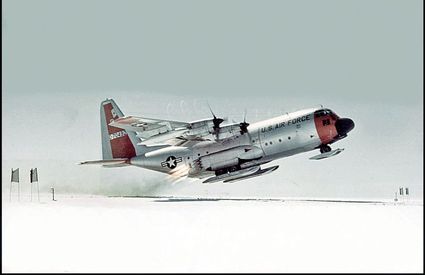 Photo courtesy of the Firebird Association

A C130 engaged in a takeoff using Jet Assisted Take Off (JATO).

School days in the 1950s were sometimes punctuated by "Air Raid Drills". The Cold War was on. The Soviet Union had built a nuclear bomb. It was probably false hope, but we practiced taking shelter in the school basement. Some wealthy people even had bomb shelters in their back yards.

Military experts figured Soviet bombers would reach the United States by flying over the North Pole. To get us enough warning to take shelter, a series of radar stations was built to detect the incoming aircraft. Farthest north was the Distant Early Warning (DEW) Line. When it was finally completed in 1960 the DEW Line stretched from the Aleutian Islands to the east coast of Greenland. Much of it was above the Arctic Circle. There would be plenty of warning if the Russians were coming.

When I finished pilot training with the US Air Force the Cold War was old news. The hot war in South East Asia was front page. I concluded that fighting in the Cold War was better for my health than being in the hot one. That realization gave me the incentive to wrangle an assignment to the squadron that serviced the US and Greenland sections of the DEW Line. The goal was to live through the Vietnam War. It turned out to be my life's great adventure.

The Firebirds of the 17th Tactical Airlift Squadron (17th TAS) were stationed at Elmendorf Air Force Base in Alaska. Our airplanes were 12 C-130 D models, which were the first "Hercules" to be equipped with skis. They had other special equipment for flying in the arctic, including extra fuel tanks, and a redundant compass system. Since we flew supplies to DEW Line stations and other places in Alaska with gravel runways not suited for skis, six of the planes were converted to just wheels.

Alaska was a good place to fly, but the most interesting aviation activity was in Greenland. Our base there was Sondrestrom, on the west coast, just north of the Arctic Circle. At least two aircraft and crews from the 17th TAS were always stationed there, having flown over from Alaska for two-week tours. An old song about 19th century whalers goes, "Greenland is a dreadful place. It's a place that's never green. Where there's ice and snow, and the whale fishes blow, and daylight's seldom seen."

That's all partially true. There's not much vegetation, but I found Greenland was less than dreadful. It was fascinating. The scenery is spectacular! There were plenty of whales. From December to February, it was dark most of the time. In June and July it was always daylight. The coast is rugged, with lots of fjords. There is lots of ice and snow though. The interior is a huge glacier called the Ice Cap.

Over 8,000 feet thick in places, the Ice Cap covers 85 percent of the island. Two radar sites called Dye II and Dye III, were located on the Ice Cap. The four eastern radar stations of the DEW Line were named "Dye" because the main station for that section was at Cape Dyer, Canada. Dye II and III were why the Air Force had C-130s with skis. The aircraft were built specifically for the construction and supply of those two sites. Every piece of steel, nut, bolt and vacuum tube used to construct these two stations was hauled to these sites by C-130s. When I was there, we hauled food, fuel, and supplies to radar crews. We were also the only way in and, more important, the only way out.

The Ice Cap radar sites were at elevations of 7,600 feet and 8,600 feet above sea level. Airplanes don't perform well at those elevations. The air density is about 60 percent of what it is at sea level. Combine that with wet snow during what passed for summer on the Ice Cap, and you might have an interesting departure.

Sometimes the turboprops just couldn't develop enough thrust, so Jet Assisted Take Off (JATO) was used. Jet assisted sound impressive but it was just big bottle rockets. The bottles were cast steel. Four were mounted on each side of the rear fuselage. Once regular acceleration maxed out, the rocket boosters would ignite, hopefully providing enough thrust to get off the snow.

GPS didn't exist at that time. Radar sites lacked radio aids for instrument flying. Standard procedure for low visibility landings was the Airborne Radar Approach (ARA). During an ARA, the navigator would use the aircraft's radar to line the airplane up with the "runway" at the radar site. The runway being a "groomed" area of snow flanked by radar reflecting panels. The Navigator would count down the distance to landing, advising the pilots of the altitude desired for being "on the glide slope," also giving the pilot heading adjustments for horizontal alignment. This would normally lead to a successful landing.

Weather reports from the sites were usually optimistic. Crews at the radar stations wanted very much for us to get there. This was before satellite TV and e-mail. Supplies included important things like letters and movies. Sometimes we'd manage to land, but the visibility was low enough that the station wasn't visible from the runway. In that case, the airplane's radar had to be used to taxi to the site. Occasionally blowing snow would give the illusion of motion even when the airplane was stopped. The loadmaster was then required to stick his head out the door to tell the pilots if, and how fast, we were moving.

Summer brought scientific research teams to Greenland. Their activities included core drilling to obtain samples from the Ice Cap. This was one of the earliest attempts to document climate change and was important research. It also gave us a chance to do "open snow landings."

Away from radar sites, there weren't many visual clues. It was hard to tell how high you were. This was especially true if it was snowing, or even overcast. The correct technique was to set up an approach pointed into the wind, arriving about two miles from the desired landing point 100 feet above the snow.

The aircraft was then slowed to landing speed. Descent continued at about 100 feet per minute. If your technique was good, you'd never realize the airplane had landed until it started to slow down. The first open snow landing was a touch and go, followed by a low approach to examine ski tracks. If no hazards were revealed, the next landing was full stop. Open snow departures were usually done by taxiing back to takeoff in the ski tracks from the landing because the snow would be compacted there and more slippery.

The prototype ski equipped C-130 has a Minnesota connection. It was flight tested in February of 1957 on lakes around Bemidji. It returned in 1958 for additional testing. Initial crew training in production airplanes was also done at Bemidji in 1959. Rumor has it the weight of the "Hercules" caused big fluctuations in the ice turning fishing holes into geysers, irritating the locals. 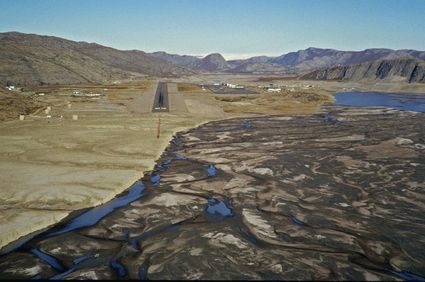 Photo courtesy of the Firebird Association

Final approach to Runway 9 in Sondrestrom with the Ice Cap in the distance.

When I left the Air Force, I left the Arctic and moved to Minnesota. The DEW line was shut down between 1988 and 1992. A lot of sites ended up being an environmental problem, which led to a disagreement between the US and Canada over the cleanup. That job is still in progress, but getting done. Dye II and Dye III were abandoned, but left in place. I understand they can still be seen from the air if you know where to look.

I still like flying airplanes with skis. My current ride is a 7EC Champ with skis for winter flying. That's why I like Minnesota so much - skis on airplanes, and cold, like Greenland.

For more information on the Firebird Association, visit http://www.firebirds.org

Tom Foster grew up in New York. After serving in the Air Force for six years, he and Lynn, his wife moved to Minnesota where he engaged in civil engineering with SEH until retiring in 2012. He has authored Minnesota Flyer's Airport of the Month column since 2010.