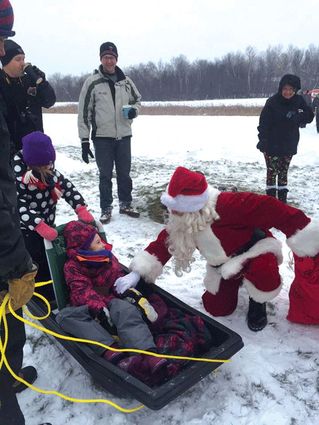 A little girl gets a sled ride to see Jolly Old St. Nicholas.

It is not surprising to hear Santa Claus worked overtime during this season of gift giving, joy sharing, and celebrating the birth of baby Jesus. Flying about in his Super Cub, even before Christmas the jolly man in red and white visited Lino Lakes Airpark where he saw 40 children, and Park Rapids, where he saw over 100 chil- dren! This publication went to press prior to Santa's scheduled visit at Key Air at Anoka County Blaine Airport, however, a peek at his schedule indi- cated his visit was on the docket for Christmas Eve.

The Minnesota Flyer got this spe- cial report from Santa regarding his Lino Lakes Fly-In he was willing to share with our readers.

"One of the biggest supporters of the Ron and Kathy Barrows Santa Fly- In is a teacher who recently made the transition from teaching elementary school to teaching children with spe- cial needs," said Santa.

It seems Santa got a message from this teacher about a little girl who had a challenge getting from the street to the hangar. The teacher wanted to know if Santa could arrange a sled with some comfy blankets upon which the little

girl might sit so she could be pulled to the hangar to see Santa y into the air- port in his Super Cub.

"You see," said Santa, "this little girl is a major inspiration to the teach- er, and I could tell from the teacher's voice when she called, this was no or- dinary little girl!" 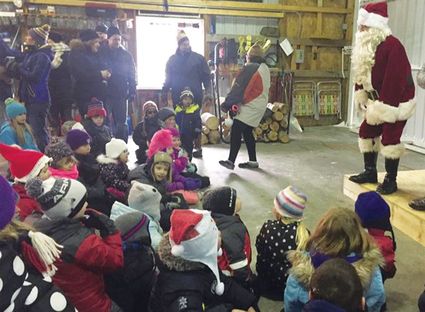 Winterized children visit with Super Cub Santa in a hangar during the Christmas season.

The teacher became Santa's helper making the necessary arrangements even before Santa had the chance. Sure enough, the inspiring, beautiful little girl was sitting on the sled with a big smile on her face as her siblings and mom and dad kept her company.

Santa went right to her, knelt down, and wished her a special Merry Christ- mas.

"I thanked her for being such a good girl," said Santa.

Though everybody was watching closely, nobody even mentioned when they saw a little tear run down Santa's cheek as he gave the charming girl a hug.

Santa said the Spirit of Christmas was alive and well right there at the Lino Lakes Santa Fly-In. Before he climbed back into his Super Cub, jolly ol' St. Nicholas was sure to turn and joyfully wish everyone a very Merry Christmas!