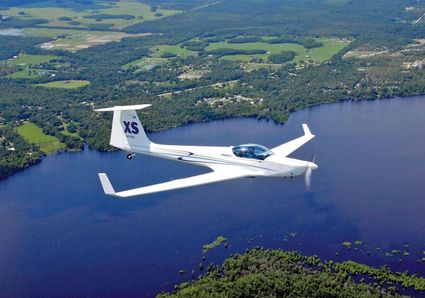 The Super Ximango motor glider slipping through the air.

The takeoff was "taildragger standard"-by the time the power was fully in, the tail wanted to come up. Even with a 9 knot 45 degree crosswind, the Ximango tracked the centerline dueto its 9' wide gear and the powerful controls.

I allowed the aircraft to accelerate in a levelattitude on the main gear, then applied back pressure. The aircraft flew off at about 50-I held that attitude as the aircraft accelerated. "Climb at the yellow triangle-best rate of climb speed" Greg coached.

I dutifully held 58 knots-and when we reached 200 feet (the minimum altitude for a glider to make a 180 degree turn to return to the field) Greg retracted the manually-activated gear.

The aircraft climbed noticeably better-and even at our all-up weight, we were climbing at about 700 fpm. I reduced to climb power at 5500 RPM, and the rate of climb only declined by 100 fpm. By the time we got to 300', we could easily have landed on the cross runway if required, and by 400', we could have simply flown the downwind for a normal landing.

This is one of the things I like about motor gliders-unlike an airplane, very little time is spent in a position where you couldn't make it back to the airport. We continued our climb to 4500'-about 3200 feet above the airport. I noticed the light controls-a roll rate as good or better than many airplanes, despite the long wings.

We accelerated to cruise speed, and verified the 110 knot claimed speed-but cruising wasn't the reason for this flight-we wanted to go gliding! Greg advised throttling the engine back to idle and holding altitude. It took a L-O-N-G time to slow down (after all, this IS a glider!) and by that time, the engine temperature had stabilized.

We switched the engine OFF (!!!) and as the prop slowed, we moved it to feather. WE WERE A GLIDER! Greg advised keeping the airspeed at the 58 knot yellow diamond-though it is higher than the minimum sink speed, it allows you to fly faster in search of lift at only a very small penalty in performance (Google "Drag Polar" for a full explanation). I saw a large cumulus cloud a mile or more away, and headed for it-guessing that it marked lift. Despite taking a full minute to get there, we only lost about 150 feet-this aircraft will stay up a long time even in the complete absence of lift.

Upon reaching the area below the cloud, we were welcomed with a soft but firm "thump"- we had found our lift. I stayed in it to find out how wide the rising thermal was (it was big!) and upon running out the other side, immediately banked back to the thermal. We were rewarded with a rate of climb of between 400 and 800 feet per minute. In no time at all, we were at 5700 feet MSL, or 4500' AGL. With the 31:1 performance of the Ximango, we could glide 139,500 feet, or nearly 26.5 miles on a no-wind day.

Power pilots often are obsessed with staying close to an airport while gliding-but with glide performance like this, you can concentrate more on the pure FLYING of the aircraft-instead of slow and steady sink. I would have liked to have stayed up all afternoon, but I had 80 glider people to feed that night-and Greg had people lined up to fly the Ximango. I asked Greg "Power on or power off landing?"

He replied "This is a GLIDER. I don't think I've made a dozen landings with power on." We headed back to the airport, and Greg had me fly a high downwind and a short base leg in order to demonstrate the efficiency of the powerful spoilers. He lowered the gear, and told me to deploy the spoilers.

We seemed impossibly high for a glider approach (most gliders have a very flat approach), but true to Greg's coaching, I found I had to come OFF the spoilers to make the runway. Putting the aircraft down right on the touchdown spot was a cinch with those spoilers-once you fly an aircraft with spoilers, you'll wonder why EVERY aircraft doesn't have them! With the huge wing span, the Ximango exhibited a glider-like ground effect as an air cushion is developed between the wing and the ground.

Greg advised holding it at 10' momentarily, then let it settle in. The result was one of the best tailwheel landings I've ever experienced-it was THAT easy to land. (I give props to Greg for the excellent instruction!) We let it roll to the intersection to clear the runway "Bob Hoover Style" after the deadstick landing-then started the engine and taxied in.

We parked the airplane and opened the canopy-from my "Perma-Grin", those waiting for their ride KNEW they were in for a treat! The Ximango gives the pilot the best of all worlds. While it is certified as a self-launching glider, it gives the pilot freedom from having to assemble the glider before the flight-it gives freedom from having to round up a tow pilot and ground crew. (A motor-glider pilot calls hiscraft "My Wednesday airplane"-I just go down to the hangar, take it out, and go fly!"

No need for a tow pilot or assistance with rigging and ground handling.) It gives dependable cross-country performance or local sport flying-on very little fuel. Since it is a glider, the pilot is required to have a glider pilot's license, but that's OK-for a Private Pilot Glider add on, you will have your license by the time you are checked out in the aircraft (and no written test). Because it IS a glider, you can fly it without a medical, even if you have previously failed a medical.

Unlike Light Sport, you can fly it at night, fly in Class B airspace, fly it internationally (they are flown here from Brazil!), fly above 10,000 feet, and fly it commercially or even IFR if so equipped and the pilot rated.

It offers over 750 mile range on little fuel (in Europe, motor gliders are used to fly from country to country for vacations) It's as close as you can get to hassle-free flying! 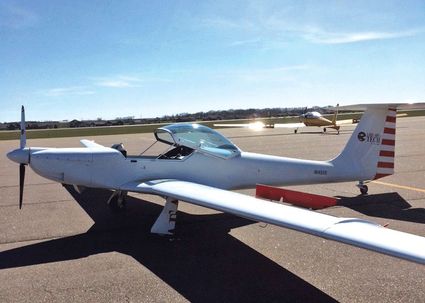 The huge and effective spoilers on top of the wing provide tremendous rates of descent and the precise glide path control that glider pilots appreciate..

How does it compare to the Pipestrel (reviewed earlier)? It's the classic "High wing/low wing" argument-which do you like better? The glide performance is the same. The cabin comfort and baggage room is better in the Pipistrel.

The gear is fixed in the Pipistrel, vs. retractable in the Ximango. The point is-these are REAL AIRPLANES-capable of providing cross-country transportation--not just toys.

Try a motor glider-like me, you just may discover how much fun they can be! J

Jim Hanson is the long-term FBO at Albert Lea, MN. Jim has hosted a number of glider events at Albert Lea, and is a glider instructor (in addition to his many other ratings). Jim enjoys flying all kinds of airplanes-balloons, gliders, seaplanes, helicopters, and jets-in 54 years of flying, he has never tired of the experience. Contact Jim at his airport office at 507-373-0608 (he will probably be flying!) or jimhanson@deskmedia.com