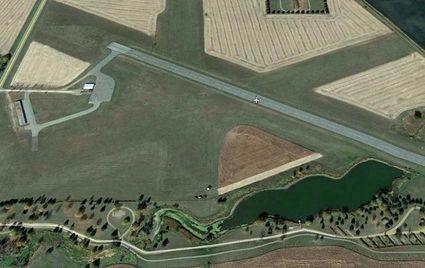 In 1948 the Church of Christ in Tracy got a new pastor. About the same time the city opened its new municipal airport. These events are related, how?

Pastor Homer Dobson was also a pilot. For 53 years he attended to the spiritual needs of his congregation while working to improve and maintain the Tracy Municipal Airport. He served on the Airport Commission, and for many years was the Tracy Airport Manager.

Pastor Dobson learned to fly in 1946 when he was working in Carthage, South Dakota. His plane of choice is the Ercoupe, one of which he restored to pristine condition. The pastor is handy with cars too. On his 80th birthday he drove his Model "A" Ford to the Tracy Airport to fly his Ercoupe. He used the entrance road that's named after him to get there. The pastor/airport manager is pretty much retired now, but he has plenty of good stories to tell.

Tracy's first airport was a "mowed strip" with one hangar started in the 1920's by a group of local pilots who formed a flying club. It was located on a farm just north of town and operated until the 1940's.

The city tried for many years to fund a municipal airport, without success. Several Tracy residents served in the Army Air Force during World War II. Their influence persuaded voters to pass a referendum in 1945 approving construction of a new airport. The vote was 357 to 241. Later that year Tracy sold bonds for $54,000 to acquire the necessary land. The new Airport was fully operational in 1947.

Two well-known Minnesota pilots got their start in Tracy. Both have been inducted into the Minnesota Aviation Hall of Fame.

Ray Johnson started Tracy Air Service in 1963. He was a leader in the field of Agricultural Aviation, but also did charter work and flight instruction. Later, he expanded to Marshall, Minnesota where his business now operates as Midwest Aviation. Until recently, Ray was still doing flight tests as a FAA examiner.

General Edwin Rawlings grew up in Tracy. He was in charge of aircraft procurement for the Army Air Corps during World War II. After the war he was appointed the first Comptroller of the new US Air Force. He eventually became the service's youngest four-star general. After retiring from the military, General Rawlings was president and Chairman of the Board for General Mills.

The modern Tracy Municipal Airport has three runways (just like it did in 1947). It's one of the few General Aviation Airports where you don't have to worry about cross winds. Runway 11/29 is now paved and lighted. It has the standard RNAV/GPS approaches. There's also hangar space, a nice Arrival/Departure Building, and self-service fueling. The city has a courtesy car you can use to get to one of the area's great parks, or the "Wheels Across the Prairie Museum."

The museum exhibits all kinds of older vehicles from buggies to automobiles. There's some antique buildings and replicas of others, plus a collection of pretty cool farm machinery. Railroad equipment is also featured, including a steam locomotive with a box car and caboose. That's appropriate because a lot of Tracy's history is connected to railroads. 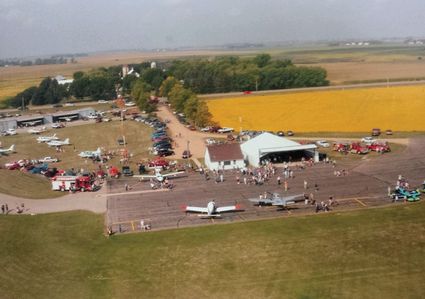 When Laura Ingalls talks about going to the "big city" in "Little House on the Prairie," she means Tracy. Back then it was the biggest town in the area and a hub for the branch lines of the Chicago and North Western Railroad.

Named for John F. Tracy, a railroad official, the village was founded in 1880 and incorporated in 1893. Today it's a "division point" where Canadian-Pacific trains change crews. The City celebrates its railroad heritage with "Box Car Days" during the Labor Day weekend. Festivities include a parade, street dance, and (of course) a fly-in.

This year will be the 90th "Box Car Days" celebration. Fly in, but stay for all the festivities. Camping is allowed on the Airport so you can sleep next to your airplane.