Elbow Lake Municipal Airport is truly Pride of the Prairie 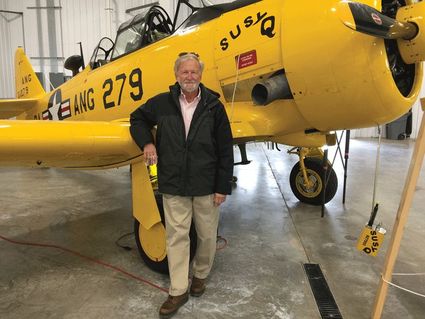 Paul Brutlag, pilot and owner of SUSY Q, the 1950 T-6G Texan based at Elbow Lake does honorary Warbird fly-bys at funerals for soldiers and special Veteran's events. A statement read during the fly-by notes in part, "...because of their sacrifice and allegiance, we have our privilege of freedom in our United States of America. Please, offer your personal prayer for our soldiers."

Elbow Lake, Minnesota has earned the right to inscribe Pride of the Prairie on a sign at its municipal airport. Their modest population of 1,165 put together a thriving municipal airport that richly enhances their community.

"People from Elbow Lake and the surrounding area have been involved in aviation since WWII," said Paul Brutlag, President of the current Airport Board of Directors. "In the early years, we used to have a grass strip and hangars with open fronts. Back in the 1970s we started making changes."

The demographics of Elbow Lake include many people with military backgrounds, agricultural prowess, and savvy business people who saw the value of being involved in aviation. In the early 1970s the community overcame a challenge with the Minnesota Department of Aviation's erroneous measurements of land intended for expansion of the airport.

"It turned out that the length scale they were using for the runway at Elbow Lake Airport was twice the length of the scale of the aerial photos," said Brutlag. "So when they laid their two to one runway scale on top of that aerial photo, we didn't have any expansion room. So we corrected that. We have also developed a mutually respectful operations and development relationship with the staff at both MnDOT and the FAA."

Brutlag attributes much of the growth of Elbow Lake Municipal Airport to the understanding and cooperation of its powerful, pro-aviation business community.

"Many of our business people see the value of being involved in aviation," said Brutlag. "The airport is part of the city. It isn't one special group. They are two separate but necessary connections and components. It is part of what keeps people directly and indirectly connected. That's what is so important."

Through the years, FAA and MnDOT Aeronautics program funds have aided in the construction of an Arrival and Departure building, T-hangars, FBO hangar, development of a seaplane base, paving of the runway, installation of GPS instrument approaches, automated weather station, and its most recent addition, a multi aircraft storage hangar.

"One of the things I like about the aviation programs, I say that collectively, it's a source of revenue for our community," said Brutlag. "We directly get funds through the proper programs for building, say, a hangar. Part of that is the percentage of costs that the city has to absorb.

"However, on the other side of that, through the state there are also payments for maintenance. It generates funds. It also makes the city eligible for various pieces of equipment that are necessary to use at the airport, like pay loaders and powered snow removal equipment. Those kinds of machines are eligible to be purchased through various financing programs. The city has an indirect benefit of having those pieces of equipment usable for the city.

"Another thing the airport does, it employs people. It provides jobs for people who might not otherwise be here. That leads to an additional connection to people through family and children."

"These students get a chance to get hands on experience in the airplane," said Dave Jennen. "General aviation provides something commercial aviation doesn't. It's the difference between riding in a bus and riding in a car.

"Our ability to offer these flights to Elbow Lake Area students hinges on the great cooperation we get from Elbow Lake area pilots and the Elbow Lake airport. In particular, Joe LaRue and his crew from Prairie Air who take the morning away from work to help provide the program for students."

Sometimes, that first airplane ride impacts a student for life. When that happens, LAPA supports and encourages students with the next step. Students who become members of LAPA have access to a Piper Archer aircraft, at a very reasonable rate, in which they may learn to fly. LAPA also has a scholarship program of $500 towards lesson expenses.

"It's not a lot of money, but it helps," said club member Mark Haberer, a statement proven true by number of pilots emanating from the Elbow Lake area.

While a career in aviation may take young people away from home, there are times it brings them back. Joe LaRue, owner of Prairie Air, Inc. the FBO at Elbow Lake Municipal Airport is proof positive of the latter.

Having been born and raised in Elbow Lake, and being active in aviation, LaRue followed a career path with Columbia Helicopters that provided travel on a global basis. However, when he ¬¬ and had children, his focus returned to his homeland where he could provide the solid upbringing he had experienced.

Through a two-year transition period, LaRue, with the help of Laura, his wife, started the Elbow Lake Airport's FBO. Opening in its own hangar in May of 2006, Prairie Air has now grown to six full-time mechanics, two general laborers, and a second bookkeeper.

"It's been a lot of fun," said LaRue. "There's been a lot of collaboration between Paul Brutlag and the airport commission, MnDOT, the FAA, and the local pilot groups, Bollig Engineering, creation of legislation filling our needs, answering our concerns, providing what the aviation community was looking for."

LaRue is quick to point out benefits of working with Bollig Engineering.

"They brought on the people they needed to get contacts made and get the job done," said LaRue. "At each phase, from raising funds to planning the architecture of it, to designing to construction, to after a project is done, they've been here. There is a lot of back and forth with MnDOT and the FAA to keep everybody in the loop and in communications.

"Bollig Engineering put personnel in place at each phase of the project. They show up to all the board meetings for the airport commission, city council meetings to help inform members. As elected officials change, they're involved to be sure they are educated about what aviation is, what aviation is doing here, what it can do for your community, what kind of economic impact it makes. They brought all that into play. They've been awesome." 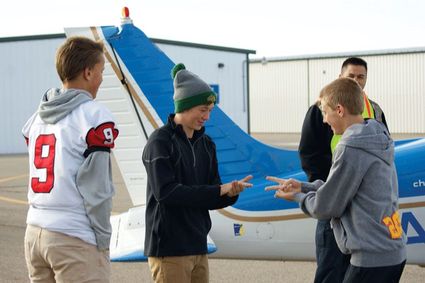 Though Joe Gimse represents Bollig Engineering and Environmental in his capacity as Client Services and Governmental Affairs, the day of the Young Eagle Flights, he attended to volunteer manpower. Gimse has been a pilot for over 20 years.

"It's an exciting day here at Elbow Lake," said Gimse. "We're just glad to be here to see how they bring in students, how they are educating them on general aviation, on how planes work, then giving them a ride, many of them for the first time. That's exciting!"

At present, Elbow Lake Municipal Airport is working on its Master Plan in their continuing relationship with Bollig Engineering.

"It's our bullseye for 25 years," said LaRue. "We're working on all the details that involves everybody from community members to organizations. We're getting everybody's input so this airport is on the map for years to come."

It is exactly this way of doing business that rings true in Elbow Lake Municipal Airport's motto Pride of the Prairie.