This is a continuing series of articles feature writer Jim Hanson is constructing regarding his experiences flying unique aircraft. This is the first part of the Ximango motor glider article. 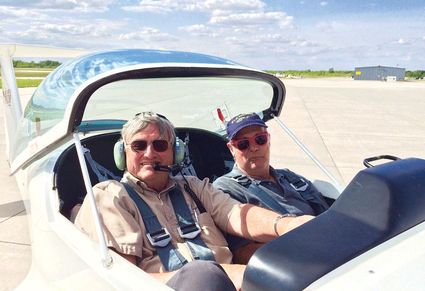 Author Jim Hanson and Greg Klein from Lakes Area Technical Institute. This Ximango has the panel on the right side, an option is to have it on the left.

It was getting harder and harder to find a unique aircraft that I hadn't flown before, but since the start of this series, I've been offered the chance to fly some really unique aircraft.

Taking them in sequence, this is the 324th aircraft I've had the pleasure of flying. The Ximango (pronounced "Zee-mon-go") motor glider is made in Brazil-an adaptation of the "stick and fabric" French Fournier motor glider-but modernized with carbon fibre construction.

I had wanted to fly this little beauty for a couple of years, since first setting eyes on it at Lakes Area Technical Institute in Watertown, South Dakota. LATI is an A&P school, flight school, and Aerial Applicator school-and one of the best I've ever seen. Their graduates (both A&P and flight) are well-rounded-they fly gliders, motor gliders, Cessna glider tow planes, and an American Champion Aurora taildragger-all of which they have worked on and restored.

They also do "hands-on" work on turboprops and jets. Several years ago, they obtained a Schweitzer 2-37 motor glider from the US Air Force Academy in Colorado Springs, Colorado. The 2-37 was BIG-using the wings and fuselage of the popular Schweitzer 2-32 sailplane mated to a new side-by-side cockpit and center section -and an engine, mount and cowling taken directly from Piper Tomahawks.

The big and roomy motor glider served LATI just as well as it served the Air Force for teaching coordinated flight and energy management-two very important items in transitioning to jets. Pleased with the performance platform of the 2-37, LATI looked for another motor glider-but this time, found a Super Ximango that had been used in an Army program at Holloman Air Force Base in New Mexico. (Hmm-an Army motor glider, based at an Air Force base-wonder what THAT was used for? Nobody would comment.)

The aircraft had very little time on it, so LATI applied for the surplus property to be used in their education program-and were awarded the aircraft. LATI aviation head Greg Klein-an experienced glider pilot and mechanic, rounded up another pilot and 2 mechanics and departed Watertown for New Mexico to claim their prize. They taught themselves to fly it and brought it home with few maintenance issues. Arriving back in Watertown, they did a thorough evaluation, and found few discrepancies.

Greg says of his pair of motor gliders- "The Schweitzer is the workhorse-the Ximango is the racehorse." I asked what he meant-"It's a lot easier for us to give rides to prospective students in the 2-37 because it is so much easier to get in and out " he explained. "The Ximango is better for thermaling."

I liked the looks of the Ximango, but the chance to fly it kept eluding me. This year, I asked him to bring it to Albert Lea during the Region 7 National Glider Competition we hosted in May-and he complied. "It took me less than 2 hours to get here" he explained. "it cruises at 110 knots." I asked if he needed fuel before we flew. "We have 5 hours of fuel at max cruise with full tanks.

We have more than enough fuel to give glider rides." Greg showed me one of the best features of the Ximango-folding wings. The wings fold like a Navy fighter on a carrier deck-and the process is easy. A combination fairing and safety latch is undone-the fairing is yet another way to prevent the folding mechanism from causing the wing to fold.

The safety catch is then tripped, and the pilot "walks" the wing tip up from the end until it is vertical-then moves to the inboard side and lays the tip down on the wing (see photos). The process is repeated on the other side. An experienced pilot can fold or unfold the wings in less than 5 minutes-without tools. It reduces the wingspan to 33 feet-easily enough to fit in a standard T hangar.

Boarding the Ximango was difficult for me-but then, most glider pilots aren't 6'4" and 255 pounds! The cockpit was large enough-but it was difficult to arrange the geometry of my legs to allow me to reach the rudder pedals while still providing full travel with the control stick. It looked like it would be comfortable enough for me to ride in-but not to fly the aircraft. Greg suggested something counter-intuitive-pulling the adjustable rudder pedals back TOWARD me. It worked-I could still move the rudder and brake pedals, and with my knees up and the stick underneath-there was still full stick travel. Pilots less than 6' tall shouldn't have any problems-but if I owned the airplane, I'd make some changes in the seating and cushions. 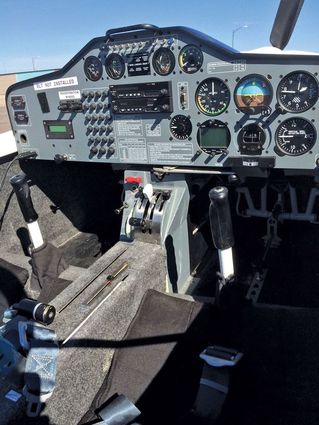 It seems that almost every motor glider these days uses the Rotax 4-stroke engine-and for good reason. They are partially liquid-cooled-the better to withstand high temperature climbs and cooling during shut-downs. They are particularly easy to start-important in a motor glider. They are reliable-with a 2000 hour TBO. They sip gas at 4.5 gallons per hour (or less)-and that gas can be avgas or mogas.

We pulled the choke (yes, Rotax engines have a choke) and it fired up on the second blade. Taxiing was easy and braking was firm and positive, and the visibility over the nose was as good as it gets in a taildragger.

The engine was still somewhat warm from the last flight, but since they had been soaring the aircraft and landed with a glider-like dead-stick landing, we had to wait until the engine temperature got into the green before departure-even on this warm day. Good temperature management is part of the reason for the Rotax engine longevity.