Airport of the Month - Eveleth Virginia 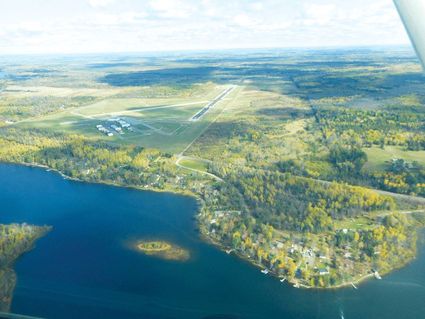 An enchanting view of the Eveleth-Virginia Municipal Airport welcomes visitors.

If any two Minnesota Cities could be said to have a lot in common, it would be Virginia and Eveleth. They share a geographic location called the Mesabi Iron Range, or simply "The Range."

Both started out as logging towns. Erwin Eveleth was an important person in the lumber business. The city was named after him. Many of the early lumber jacks moved to the area from Virginia. They named the other town after their home state.

By 1900 the local economy had shifted from logging to iron mining. That year, the entire village of Eveleth was moved about a mile to its current location because there was a lot of ore under the old site.

Each City had its own airport in the 1930's and 40's. Now they share the operation of the Eveleth-Virginia Municipal Airport. Opened in 1952, the "new" airport has two runways, connecting taxiways, and plenty of apron space.

There's an automated weather system (AWOS) and remote communications station (RCO). Besides the usual RNAV/GPS approaches, a VOR is located right on the airport so even pilots still using twentieth century equipment should be able to find the place.

Both jet fuel and aviation gas are available. There are rental cars and taxis for ground transportation, plus a nice Arrival/Departure building with a meeting space and pilot's lounge.

Besides the Airport, Eveleth and Virginia operate the nearby Ely Lake Seaplane Base. The lake has plenty of space for seaplane operations. A limited use turf runway makes this a good spot for float plane change-overs. Aviation gas is also available at the seaplane base.

After World War II, two local pilots came home to the Range and pursued civilian flying careers. They had contrived to be present for the first and last air battles of the war. Ray Glumack flew Scout-Observation planes for the Navy. He was aboard the battleship USS Maryland at Pearl Harbor on December 7, 1941. Both the Maryland and Glumack survived the attack and served together for the rest of the war.

Art Tomes was an Army Air Corps pilot who flew 35 missions against the Japanese home islands in B-29s.

The two veterans started Northeast Airways at the old Virginia Airport, where they offered charters and flight instruction.

When the new Eveleth-Virginia Municipal Airport opened, they moved there. Mr. Tomes was appointed the first manager. Glumack went on to be Executive Director of the Metropolitan Airports Commission. Tomes later became a corporate pilot and a real-estate developer.

As top quality iron ore was depleted, the mines in Minnesota began producing a lower grade ore containing less than 15 percent iron. Because it resembles ore found in the Taconic Mountains of upstate New York, it's called "Taconite".

The metal has to be separated from rock with powerful magnets before shipping. Appropriately, the direct descendant of Northeast Airways is Taconite Aviation, a full service FBO that still offers charters and instruction, plus the very best aircraft maintenance. They also manage the Airport and Seaplane Base.

Any visit to Eveleth-Virginia requires a side trip to the Hockey Hall of Fame. It's in the right place because hockey is a really popular sport on the Range. Twenty-five players from Eveleth and Virginia have gone on to careers in the National Hockey League. John Mariucci, the great University of Minnesota hockey coach, was born in Eveleth.

Getting some "pasties" is also required. That's not part of an exotic dancer's costume. A pasty is a pie made with meat and vegetables. The idea was invented in Cornwall and brought to the Range by immigrants as a delicious, self-contained lunch to take "down in the mine."

Mesabi comes from the Ojibwa word for "Giant Mountain." The 110-mile-long range has elevations approaching 2,000 feet. It's a spectacular site from the air. The best way to view it all is making a trip to the Eveleth-Virginia Airport.