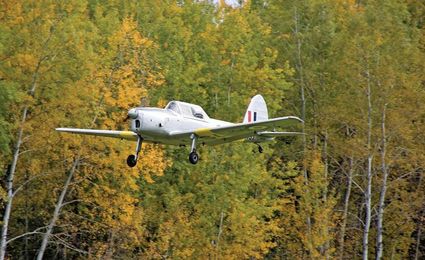 Photo courtesy of Kenneth B. Peterson

Incoming de Havilland DHC-1 Chipmunk, an aircraft originally designed and built in Canada (218 aircraft), most were manufactured in the UK (1014) aircraft.

When he was not flying, the late John Benson sat in a barber's chair next to a wood stove at his airport on his farm, sharing stories about aviation. One of the familiar stories is how, in the 1930s, his brother Roger plowed an airstrip on the farm just east of Bald Eagle Lake in White Bear Township.

"John actually got his pilot's license when he was 15 years old," said EAA Chapter 745 president, Jerry Fleischhacker at the October 8 Fly-In Breakfast.

The old barber chairs still sit next to the fireplace in the Arrival and Departure building. Photos and framed newspaper articles about Benson and his visitors grace its walls.

According to historian Sara Markoe, when John died in 1993, he donated a 66-acre plot of land to White Bear Township with the stipulation that it remain an airport for 40 years. EAA Chapter 745 respects Benson's commitment to aviation by keeping the airport active.

"We hold four pancake breakfasts a year," Fleischhacker. "We also just started doing burgers once a month on a Thursday night." 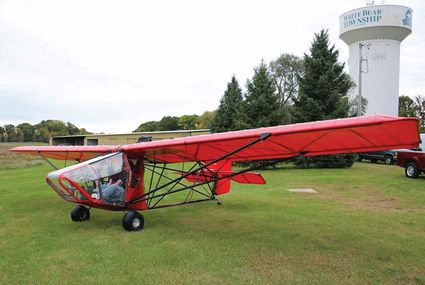 Photo courtesy of Kenneth B. Peterson

Mark Estabrook prepares for takeoff in his T-Bird 2 light sport.

The Fly-In Breakfast of October 8 brought a host of vintage aircraft including a rare Piper YL-14 owned and flown by Pat Harker who is based at Anoka County Blaine Airport. The YL-14 is one of only three operational aircraft of that type in existence. One is in Spain, another at Fort Rucker in Alabama. Two of Harker's four children accompanied him to the breakfast.

"They love it," said Harker. "I've bought other L birds but this is the only one with the bench seat that the kids can both ride in. With the door being all glass, they can sit there and look right out of the plane. With anything else, they'd be looking at the fuselage."

"We usually have a really good turn out at our events," said Fleischhacker. "We are a small, private airport. Our runway is 1,500 feet of grass. We like it here. Everybody's welcome."

It is exactly the warm welcome visitors receive from EAA Chapter 745 that would make John Benson proud.