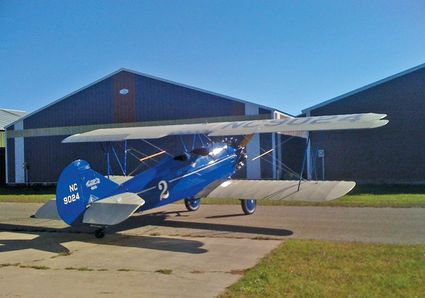 Biplanes are drag personified, with wings, struts and wires everywhere, but the biplane design also means there is a lot of lift available.

This is my 321 unique type of aircraft flown. As mentioned previously, there is no set standard for aircraft flown. It's up to the individual as to how he/she counts them. My criteria are that I must make a takeoff or landing, no holding the controls in cruise. By making a takeoff or landing, I get to experience the ground handling, the acceleration, the effect of controls over differing airspeeds, and the rate of climb or descent. I don't automatically count a suffix model, only those with significant changes, powerplants, for example.

The airplane is owned by long-time friends Roger and Elizabeth Gomoll. Roger's dad, Stan Gomoll, was a long-time stalwart and director at the Vintage division of EAA. Roger continued that tradition, eventually becoming a Vintage Director in his own right. Roger is a fellow glider pilot in addition to being an antique airplane buff.

It was at the EAA Museum in Oshkosh that Roger developed his appreciation of Travel Air biplanes. He volunteered as a pilot at the EAA's Pioneer Airport in the 1990's and logged hundreds of hours giving rides to visitors in the EAA's 1929 E4000. Fast forward to the 2003 National Air Tour. A 2,000 mile flight that featured over 30 aircraft built before 1933 and that circled the entire eastern half of the US. Roger served as the tour announcer. From that vantage point, he had daily contact around engine aircraft, including a 1928 Travel Air 4000 restored and flown by John Coussens. In 2010, Roger saw John's Travel Air listed for sale on Barnstormers. Roger and his wife Liz were on a flight to Arlington Washington to see the aircraft. Within a few days, it was theirs.

The Travel Air Company was formed in 1925, just prior to the Great Depression, in Wichita, Kansas by Clyde Cessna, Walter Beech, and Lloyd Stearman, each of whom would become household names in their own right in the aviation world. One of the first employees of the company was Olive Ann Mellor, hired as a secretary. She eventually became the office manager, and eventually married Walter Beech. As President of Beech Aircraft, Mrs. Beech became one of the most powerful women in the world.

Travel Air produced a biplane. It had the unusual feature of sporting what became known as "Elephant Ear" ailerons. "Elephant Ears" were an attempt to lighten the control forces in roll by installing "balanced" ailerons. As the aileron went up, for example, the nose of the aileron went down into the slipstream, countering the control forces. As was the case of so many aircraft manufacturers of the era when innovation happened rapidly and designs constantly changed, Travel Air biplanes were available with a number of different engines in various configurations. One of the most popular configurations was the inclusion of a small door on the left side of the fuselage allowing easier access to the snug two-place front cockpit, something very useful for maximizing revenue for barnstormers. With a lot of wing area and a powerful engine, the aircraft was capable of operating from unimproved airfields. It even sported huge tires to allow landing in farm fields to hop rides. Pilots liked the aircraft Travel Air offered. The company sold more airplanes in the pre-Depression era than any other.

We fly the Travel Air

Even with the access door to the front cockpit, getting in isn't easy, especially for large or older people. You hop up on the left lower wing, taking care not to hit the flying wires, open the door, lift your foot over the sill to stand on the seat cushion, then slide on in. The front cockpit is spacious for one person. It would be tight for two. People almost 100 years ago were not as large then. I fastened the military-style seat belt and shoulder strap, something far different than the single friction device of the old slip-through seat belts, and put on the headset, definitely something not in general use when the aircraft was built! Roger hit the starter, again, something the aircraft wasn't built with. The moment the radial engine caught and started loping along, I knew this was going to fun, catching a glimpse of the excitement those first passengers might have felt. Roger taxied with brakes and a steerable tailwheel, more newfangled improvements. There are no instruments in the front cockpit. The front cowling was right in front of my face. There is no forward visibility on the ground from the front pit, and precious little in the air. The pilot sitting in the rear has a much better view. I taxied the aircraft to get a feel for the ground handling. Tt was good, thanks to those newfangled brakes and steerable tail wheel.

Lacking any instruments, Roger talked me through the takeoff. Ease the power in. The tail will come up about the time the power is all in and the airplane will kind of levitate off the ground. Hold that attitude.

It equated to a climb speed of about 70 miles per hour. Knots hadn't been "invented" yet for aviation! We climbed out at about 700 feet per minute. Climb rate and speed weren't important to us now. We were having an adventure! Like so many open cockpit airplanes, you don't need a turn and bank indicator to know if your turns are coordinated. The air gives the miscreant pilot a slap in the face if the turn is uncoordinated. Is it any wonder that pilots resisted the comfort of closed cockpits in the day? They felt they had to be outside to feel the wind!

At altitude, we throttled back. Roger says cruise is at 1750 RPM. Lacking a tach, I wouldn't know. That gave us an indicated airspeed of 95mph. Again, I have to take his word on it. The nose attitude was much lower. Roger had to coach me. "About there..." I tried some turns. Even with the Elephant Ears on the upper wings, the force required is heavier than most airplanes today. I noticed some niggling back and forth on the ailerons, not a vibration, but a tendency to snatch a bit back and forth. Roger explained that it was due to the overhanging aerodynamic balances on the ends of the wings reacting to rising air.

Lacking any instruments in front, and with only a few minutes in the aircraft, the landing would be Roger's. I noticed that as he throttled back the wind past the cockpit slowed quickly, a characteristic of many biplanes. Roger said that he likes to make final approach at about 65 IAS, but how would I know that unless asking him? He wheeled it on for a squeaker landing. He was obviously master of the airplane. Roger is no stranger to barnstorming rides. For several years, he volunteered at EAA to give biplane rides in their aircraft. It was a thorough checkout. The check pilot sat in the back initially while the new pilot sat in front for about three or four landings. Then the check pilot took the front pit to coach the new pilot. It usually takes about six to eight landings to check out an experienced tailwheel pilot.

On shutdown, extricating myself from the aircraft was a chore. Releasing the belts and headset, sliding back to stand on the seat, then lifting a leg over the door sill to stand on the wing before stepping down. I had to wonder if those barnstorming passengers, having never flown in an airplane before, managed it well with unsteady legs after the excitement of the ride. 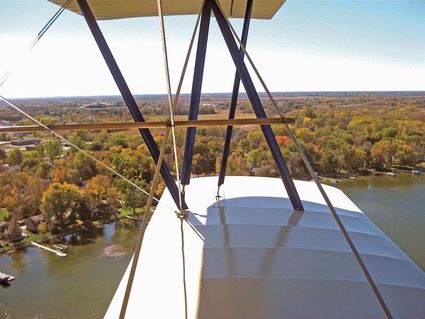 What could be better than a summer evening, clear skies, light wind, and an open-cockpit biplane just waiting to be flown to show you what flying is all about!

The opportunity to fly the Travel Air happened on the same day that I flew the Pipistrel. Both aircraft owners were attending a glider competition at Albert Lea. They traded rides. We need to do more of that. It's fun and educational!. The two aircraft could hardly be further apart, about 75 years apart for one thing. The one thing they did have in common, both were among the best offerings of their time. Both were fast, economical, and fun. While the Pipestrel was fast and efficient with a small engine, the Travel Air dragged a pair of biplane wings, a forest of wooden struts, and a lot of wire through the air, requiring a larger engine. Most of us don't fly airplanes simply for efficiency, though. Sometimes we fly just for fun. The Travel Air's simplicity takes us back to the days when the ability to casually say "I was doing 100 mph," gave automatic bragging rights to the speaker. It was faster than almost anybody had ever traveled. It was a time when very, very few people had ever ventured aloft. To do so automatically branded you as an adventurer and a daredevil. Pilots were people that did things and went places. After all, hadn't that young Lindbergh kid just flown across the Atlantic? I leaned upon the wing, struck a casual pose.

Jim Hanson is the long-term FBO at Albert Lea, MN. Even after 52 years of flying, Jim enjoys flying-any aircraft. Jim says that he learns a lot from flying many different aircraft, but that he apparently has to learn some lessons over and over again. If you have a lesson to teach Jim, he can be reached at his airport office at 507-373-060,8 but don't be surprised if he is out flying. He can be reached by E-mail at jimhanson@deskmedia.com