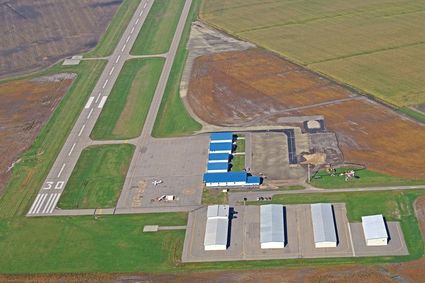 An archived aerial view of Moorhead Airport. Since that time additional hangars have been constructed.

Moorhead has always been a transportation center. Early in the 19th century the route between the Mississippi and the Red River of the North was serviced by ox carts. A settlement sprung up where the cart road met the river. River boats then connected to Winnipeg and points north. Ox drivers and riverboat crews were a rowdy bunch. The settlement soon developed a reputation as "sin city" with over 100 taverns, plus some other establishments that added to the notoriety. By 1871 railroads had replaced the ox carts, but Moorhead remained an important juncture. The town was incorporated in 1881 and named after William G. Moorhead, then director of the Northern Pacific Railroad.

By the 1950s US interstate highways were in operation. Moorhead became the last exit on I-94 before leaving Minnesota (or the first for arrivals). But, the city still lacked an important leg in the "planes, trains, and automobiles" system. This was a huge sore point by the 1980's. Moorhead folks had to go to North Dakota for aviation services. The city was determined to change that.

Coincidentally, Moorhead resident Roger Olsen was flying fighters for the National Guard in Fargo at the time. His concern was traffic conflicts between jets and smaller aircraft. Roger became really alarmed when a "bug smasher" caused a flight of four Phantoms he was in to abruptly break formation. No disrespect was intended, because Roger owned a couple "bug smashers." When he wasn't teaching school or flying for the Guard, he was flying for General Aviation. Roger Olsen thought a separate airport for GA was the answer to traffic conflicts. Wisely, the city enlisted him to lead the airport development effort in Moorhead.

When the Moorhead Municipal Airport opened in 1996, it was the first entirely new Minnesota airport to be built in over 25 years. Skipping the landing strip phase, the city went directly to a full service facility with a 4,300 foot paved and lighted runway. Initial construction included some T-hangars, a maintenance hangar, and an Arrival/Departure building. Later, a full parallel taxiway was added. Today there's Runway End Identifier Lights (REILs) and Precision Approach Path Indicators (PAPI), plus compulsory GPS approach procedures. An automated weather system is on the field, as is a remote communication unit so pilots on the ground can talk directly to Flight Service or Air Traffic Control. Moorhead has the facilities to service just about any aircraft from "bug smashers" to corporate jets. Both jet fuel and aviation gas are available 24/7. A courtesy car, rental car or taxi can get you where you need to go. A lot more hangar space has been added. Moorhead is home to about 35 airplanes. There's plenty of ramp space for parking, plus heated storage for cold winter nights. The Arrival/Departure building offers a meeting area and flight planning facilities.

Florence Gunderson-Klingensmith was born in Moorhead in 1906. Since the Moorhead Airport was almost a century in the future, she became an early manager of the airport in Fargo. Florence was one of the founders of the 99's, an organization that promotes women in aviation. Incidentally the organization is so named because it was started by ninety-nine female aviators in 1929. The first president was Amelia Earhart. In 1931 Kingensmith set a record for consecutive loops and flew a BeeGee in the National Air Races. The BeeGee was a notoriously difficult aircraft. Ms. Klingensmith died flying one in the 1933 races.

These days Moorhead is known for education. Five colleges and universities are located in the City, with a combined student enrollment that exceeds 14,000. It's a modern community with over 38,000 people, 48 parks and a nice downtown. One of the parks displays a replica of a Viking ship. Two parks have golf courses. There are plenty of good places to stay, and a lot of first class eating establishments. The Moorhead Dairy Queen franchise is famous for being the first to make and sell Dilly bars. The franchise owners developed the molds and process, then patented the product.

One of the City Parks is dedicated to fun with your canine buddy. So if you're a flyer who can claim, "That dog is my Co-pilot," Moorhead should be on your list of destinations. Thanks to the Moorhead Municipal Airport, you can get there a lot faster than the ox carts.