By Molly Martin Director of Communications 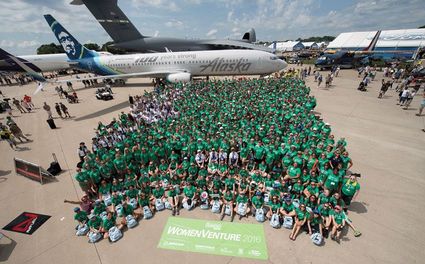 The WomenVenture photo is an annual tradition at Oshkosh wehre pro-aviation women gathered again on Wednesday in Boeing Centennial Plaza for the annual group photo.

"WomenVenture has transformed the experience of women attending AirVenture," says WAI President Dr. Peggy Chabrian says, "Since its beginning, WomenVenture has motivated and inspired thousands of women. We are grateful to EAA for encouraging women to participate not only in AirVenture but in the hundreds of other sights and sounds of Oshkosh."

For more information about WAI, please contact WAI at (937) 839-4647 or online at wai.org. Molly Martin, Director of Communications