Teams of volunteers sort and bag toys to be delivered to hospitals in accordance with their needs. 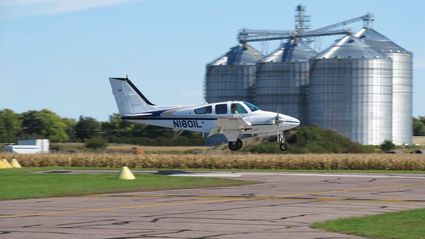 A Beech 95-B55 (T42A) arrives with a perfect landing the morning of 18 September, the 74th Annual Fly-In at Hector, Minnesota.

All through the morning of 18 September aircraft arrived at Hector Municipal Airport with such regularity it began to take on the look of MSP on a Saturday.

"We have one of the biggest, if not the biggest fly-in breakfasts in Minnesota right out here in Hector," said airport manager Ed Newberg.

In a town with a population of 1,100, it is an impressive statistic that the Hector Annual Fly-In Breakfast has served up to 1,600 breakfasts. This year, with near perfect weather numbers looked to reach between 1,200 and 1,400 breakfasts served.

"It's a little breezy from the south," said Newberg. "It would be nicer if it was right down the runway, but actually, everything is just going wonderfully.

Established in 1925, located just 70 miles straight west of Minneapolis (1D6) Hector Municipal Airport is reputed to be the oldest airport in Minnesota still on its original land.

"The Wold Chamberlin airport, what we know as Minneapolis International Airport is actually older than Hector," said Newberg, "but it's been moved."

Newberg started flying when he was 16 years old. He soloed in 1972, bought his first airplane in 1974, got married in 1977 and subsequently moved onto the airport with Connie, his wife. He's been the airport manager ever since.

"We raised our family living at the airport," said Newberg. "We have three sons Brandon, Taylor, and Dustin. "

In addition to being the manager, Newberg owns and operates Newberg Sky Spray. Newberg Sky Spray employees two full-time pilots, has four airplanes. In addition, he operates an aircraft sales business with his brother Curtis of Wilmar. Newberg also has the distributorship for the northern half of the U.S. and Canada for the electrostatic spray system used for crop dusting planes.

Ever so much the aviation enthusiast, Newberg offers free plane rides to introduce young people to aviation. Beyond that, he accommodates people with physical disabilities by using his own invention to lift people into the passengers' seat of his airplane so they can experience the thrill of flight. He also volunteers time at the Commemorative Air Force in Mesa, Arizona during winter months.

"Obviously it brings in traffic that would not normally come here for industry," said Squibb. "It gives our industry a competitive advantage." 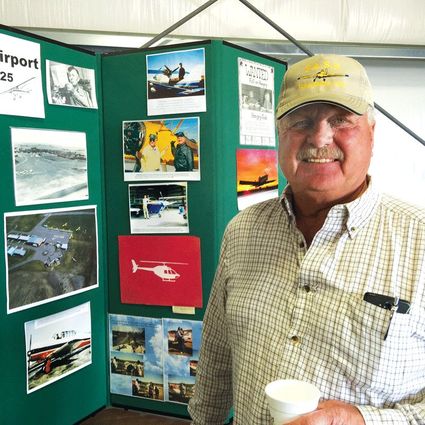 One of the industries also thriving in Hector is Loftness Specialized Farm Equipment, located across the street from the airport. They manufacture snow blowers and stock shredders and fertilizer spreaders and big bagging machines to bag corn up in the fall. They are Hector's largest employers.

Diana LeSueur, a pilot, teacher from Arizona, and friend of the Newbergs assisted with this year's ping pong ball drop in which children retrieve numbered ping pong balls dropped from an airplane into a specified area on the airport grounds. Prizes are given according to the number on the ping pong ball.

"Connie thought of this activity about 25 years ago," said Newberg. "She shops year round for prizes for this event."

This year Ed Newberg was inducted into the Minnesota Aviation Hall of Fame where, during his acceptance speech he told the audience, "Do what you enjoy and you will never have to work a day in your life."