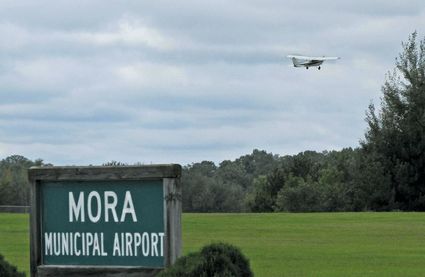 Mora Municipal Airport welcomed guests all morning during its annual Fly-In that takes place the third Saturday of September each year.

A bit of cloud cover did not dampen the spirits of attendees of September's annual Fly-In at Mora Municipal Airport. Smiles were had at every turn, due a combination of a good breakfast prepared by the Lions Club, good organization from the Airport Board, and plenty of interesting aircraft.

Fagen Fighters WWII Museum graciously displayed their Erco Ercoupe with Pilot Ray Fagen proudly emblazoned under the cockpit window. The eye-catching aircraft drew many visitors including Master Pilot award recipient Darryl LeMire and his guest Todd Zambrano whose flight in a general aviation aircraft had been on his bucket list all his life.

LeMire accommodated Zambrano with a ride in the Piper Clipper he's owned for 37 years. To make his first flight more enriching, the Mora Fly-In was their destination.

"This is better than just a simple airplane ride," said LeMire. "We came up and had breakfast. We dodged around a little bit of bad weather on the way up, nothing too severe."

Zambrano had that first time flight grin and enthusiasm so fruitful for aviation seed planting. When asked if this experience would lead to more, Zambrano was quick with his reply.

"I hope so," he said. "I'd love to fly, absolutely! I've thought about it my whole life. This is a life event for me so it's great!"

Five-time award winner Dave Smith and Leann, his wife arrived in his 1959 Meyers 200 A model aircraft. After breakfast Smith took time for a brief interview on his experience at EAA AirVenture in Oshkosh where this year he won two Reserve Grand Champion awards, one in the Contemporary Custom category with the Meyers, the other in the Antique category with his 1938 Beech E17B Staggerwing.

"It was a shocker," said Smith. "I was just sitting in my chair getting my head wrapped around what just happened with the Meyers when the Staggerwing pops up on the screen. It was a bit overwhelming."

At 6'8" Smith, who has been building and restoring aircraft for almost 30 years, has to consider whether or not he will fit in the cockpit before he buys and restores a plane. Sometimes it just doesn't work out that way.

"In the Staggerwing I really don't fit very comfortably in the front seat," said Smith. "It's not very roomy for my long legs."

For Smith, it's not as much about have a plane as working on one, which he does from his home in Milaca. A professional construction worker in the summer months, Smith spends his winters in aircraft restoration in the body shop on his property. Though he thoroughly enjoys making airplanes airworthy, he doesn't always keep them long term.

"Typically, I buy it, rebuild it, fly it for a couple years, then sell it," said Smith.

Master Pilot Award recipient Darryl LeMire approaches the Fagen Fighter's WWII Museum's Ercoupe with guest Todd Zambrano (red cap), who had never flown in a general aviation aircraft until the day he attended the Mora Fly-In in LeMire's Piper Clipper the Master has had for 37 years. Zambrano said his first flight experience was so great he's already looking forward to the next.

Martens announced that construction on a new crosswinds runway (11/29) at Mora begins in October.

"It should be open some time next summer," said Martens. "It will be a 3,000 foot by 150 foot grass runway. That will fill a need in east central Minnesota for having a cross wind runway, particularly for places like Rush City, Cambridge, Milaca, Isle, Hinckley."

Martens, whose shirt was such a luminescent color that it reflected off his face even under the clouds, wore the item for a specific purpose.

"It's even worse in the sunlight," said Martens with a grin. "I wear it when I want people to find me."

Now there is a man dedicated to serving people...and he is, indeed, very easy to find on an airfield.