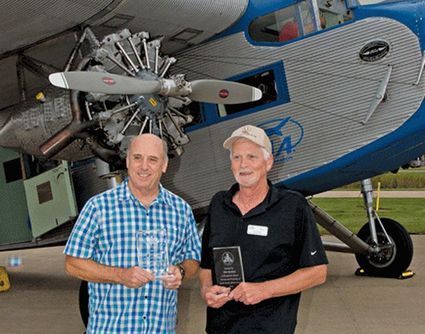 "The work you do with the EAA, and all of your other volunteer work truly strengthens our airport community," said MAC Reliever Airports Manager Joe Harris.

Following are statements given to the Minnesota Flyer upon request.

"I am so honored and humbled to receive this award. Awards that one receives from those with whom one works are the most meaningful. It has been such a pleasure to partner with the MAC to promote aviation not only in the metro area, but also in the state of Minnesota."

"It was an unexpected honor for me to have received this recognition from the Metropolitan Airports Commission! In large part, credit should also be given to the most talented, motivated, and nicest individuals I have ever been associated with...my fellow EAA Chapter 237 members. They truly exemplify the "Spirit of Aviation!" We believe the Anoka County-Blaine airport is the best in Minnesota, and we're dedicated to making it even better for aviators and the general community to enjoy. Kirk Fjetland