Community airport proudly boasts "We are the vacation destination in Minnesota!" 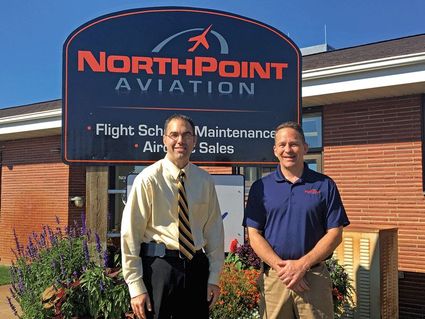 When just the right team is matched with compatible, effective management; when business is set in a harmonious, symbiotic location; when benefits extend to the community, brilliance happens at an airport. Brainerd Lakes Area Regional Airport captures this exact configuration of elements in the community it serves.

This spring, Steven A. Wright assumed the Airport Director position, and Joe Birkemeyer became manager of Northpoint Aviation, the airport's FBO. Both men have similar backgrounds, growing up in, and having a passion for aviation.

Wright, born in Illinois but raised in rural Wisconsin recalls his first flight and the impact it had on his life, even as a child.

"I remember one of my first flights was out of Mitchell Airport in Milwaukee Wisconsin," said Wright. "I was just fascinated by the complexity of the airport environment, all the moving parts."

Wright and one of his childhood friends became so fixated on flying they turned a closet into an aircraft with broomsticks for control sticks.

"We were flying around the world without having to leave the comfort of our closet," said Wright.

Joe Birkemeyer doesn't remember his first flight, not because of a faulty memory, but because he was wrapped in a baby blanket at the time.

"At six months old I was flying around on the hat rack of a Taylorcraft," said Birkemeyer, "so, I grew up around aviation, mainly floatplanes. Everything my dad owned, if it could go on floats, it went on floats.

"Growing up in Worthington, Minnesota, we lived on the south end of Lake Ocheda, which is perfect for floatplanes. It was probably about two feet of muck and three feet of water, so it worked well for that."

As each boy grew into adulthood, they matured in aviation as well. The Wright family moved to the Twin Cities in Minnesota during his junior year in high school, at which time the young boy made a decision that would impact the rest of his life.

"Instead of trying to get plugged into a new community, I ended up going off to the airport and doing my flight training," said Wright. "I got my license at AirLake, south of the Twin Cities. I loved every hour of that flight training. I couldn't get enough of it."

After graduation it was on to St. Cloud State University. In his college years, while employed in ramp work at Mesaba Airlines out of MSP, a career deciding revelation came to Wright.

"I noticed that, boy, this airline pilot schedule is crazy," said Wright. "I discovered that, in management, I could still work at and airport, still be around aviation, and still go home every night."

An internship at Owatana's Degner Regional Airport taught Wright the intricacies of airport operations, which he put into practice right out of college in an airport manager position at Willmar. After five successful years there, it was on to Mitchell Airport in Milwaukee as Airport Properties Manager for the next ten years.

It was then that he was asked to consider becoming the airport director at Brainerd Lakes Regional Airport, a position he took in May this year.

"It was always a dream of my wife's and mine to get back into more of a rural setting," said Wright, "especially with our five boys, to let them experience nature more than what we could do in Milwaukee."

Joe Birkemeyer followed the floatplane path from his childhood days right through St. Olaf College, though he gathered experience in the automotive industry as well. After college, and a short stint as a senior assistant manager at an auto parts chain, he decided to go into aircraft mechanics. After graduating Winona Tech, he worked for Bauman Floats out of South St. Paul and doubled down in experience by taking an additional job at Northwest Airlines. He continued with the company when it relocated to New Richmond, Wisconsin where he became General Manager, completing 16 years with that company.

"It was a small company," said Birkemeyer. "I did everything from riveting to advertising to working with the FAA on certification projects, to being the flight test pilot, to going to all the airshows and flying events, selling floats, ordering parts, and training staff. We went from one employee, me, up to 15 during the time I was there."

When the owner of Bauman Floats reached retirement age, he closed the company. Birkemeyer moved to Denver where he became the General Manager of RV Four Seasons, thinking he may have more time for recreational aviation. It was four years later that he was asked to consider managing Northpoint Aviation, the FBO at Brainerd Lakes Area Regional Airport. His passion for aviation brought him back to Minnesota.

One of the impressive aspects that drew both Steven Wright and Joe Birkemeyer to Brainerd Lakes Area Regional Airport is its community support.

"I see a very high community support for the airport," said Wright. "Brainerd airport is not just owned by the city. It is actually owned in partnership with Crow Wing County, so we really do support the Brainerd Lakes Region. That relationship has helped the airport and community be financially stable since the 1940s, when it was created.

Another draw for the airport director is the airport's balance between general aviation and air service.

"One thing I like about the Brainerd airport is the diversity of traffic that comes in here," said Wright. "We have a very strong general aviation use of this airport as well as support of commercial air service, so you get the best of both worlds here."

Another amenity at the airport is also a tender memory for Wright, the Wings Airport Café.

"I recall when I was flight training that I would fly into Brainerd and plan a long cross county just so I could land and have a bite to eat on the airfield, shake the flight training jitters off, get back into the airplane, and fly back home, so it's good to see that Wings Airport Café is still doing so well here. The cafe is definitely an asset to the airport."

The airport is also making improvements. At present, there are plans to transition from the current well and septic system to city water and sewer.

"That's the big project right now," said Wright. "That is going to change the way we can develop our hangar areas and business development areas on the airfield."

Joe Birkemeyer is also energized about services offered by Northpoint Aviation, the airport's FBO. Not only does Northpoint sell fuel and do maintenance, they also offer flight training, aircraft rental, broker airplanes, manage two corporate aircraft, and have a Kodiak Quest dealership. 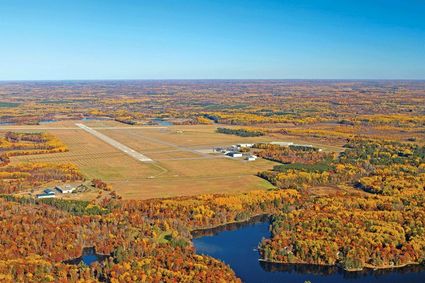 "We can maintain anything from a fabric covered J3 Cub to a big corporate jet to helicopters," said Birkemeyer. "There's a lot of helicopter traffic on the airport."

Seaplane training is one area in which Northpoint Aviation shines, largely due to CFI Mark Mathisen.

"Mark's the expert," said Birkemeyer. "He has over 16,000 hours of flying experience. If people want to come in and get a seaplane refresher or get experience from a pilot who's flown almost everything that can be put on floats, with Mark's expertise, they are going to get exactly what they need.

From the sounds of it, anybody traveling to Brainerd Lakes Area Regional Airport is going to get exactly what they need as well.